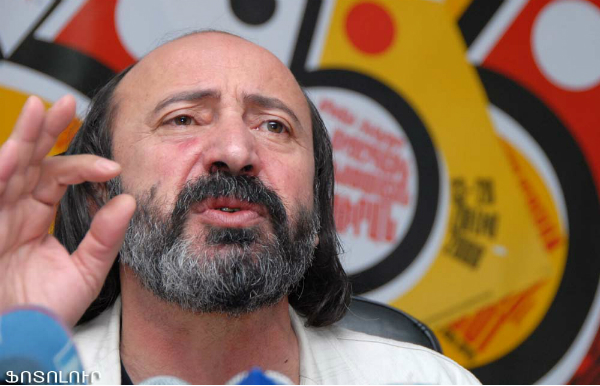 Documentary film is developing in a much more interesting way in Armenia and, by and large, becoming more accepted around the world than feature films. In any case, documentarians Harutyun Khachaturyan, Vardan Hovhannisyan, and Arman Yeritsyan’s films more often are included in different international film reviews than the works of feature film auteurs.

However, the process of shooting a documentary film is a winding path and the films almost don’t reach audiences. It seems as if they are not shown anywhere, apart from film festivals. Not even Golden Apricot International Film Festival General Director Harutyun Khachaturyan, whose films are screened in major international film festivals, has an answer to the question “Why?”.

On what basis is documentary film in Armenia funded? There’s the impression that the films are shot however they happen to be and the state doesn’t know what it will get as a result.

The state doesn’t have to know; what’s important is that the auteur knows. But, it seems, the principles of documentary film production are of no interest to anyone here [in Armenia]. Also of no interest is whether those responsible for this process have aged, lost their taste, can’t or don’t want to do their work well or not.

It’s quite difficult to find serious documentary film projects (made are mainly portraits of some individual or another). Also absent is defending the projects, which is a very important stage of the future film, since by defending his project, the auteur gets excited and clarifies the work for himself. He must be able to convince and infect the commission with his work. If he convinces them, he too becomes convinced.

Since projects do not yet earn the appraisal of a professional commission and are not adopted through open discussions (including also with the participation of journalists), we continue to finance film haphazardly. And work done haphazardly never becomes art.

There are more successful examples in documentary film than in feature film. Why?

Documentary film can become a phenomena, since, in any case, less money is needed to produce it than [to produce a] feature film. And then, much depends on the auteur’s personality. Sometimes the personality is the most decisive factor.

Our documentary films have success, but that success could be greater if the process of production and exhibition was coordinated.

It is considered that Armenian documentary film is poetic.

I would say that in many cases it’s unnecessarily poetic. Often inaptitude is hidden beneath that — they can’t produce a good film, [so] they say it’s poetic.

The primary thing in documentary film is a clear script. And the biggest problem here [in Armenia] is that a frame by frame, second by second detailed script doesn’t exist. They shoot, then decide how to edit, what to leave, what to remove. Anything can be filmed, but if you don’t have a script, the film won’t work out.

It’s considered acceptable to write 4–5 sentences and present it as a script. And all [Armenian] documentary films are produced like this.

Why are documentary films rarely shown on [Armenian] television?

I would say they’re not shown at all. Let me bring my example: many times I have offered to provide my films for free to various [local] TV stations. But they don’t take them. Honestly, I don’t know why.

If even my films aren’t shown [on television], then what can young people do? After all, I am a People’s Artist of Armenia; I have medals and awards from different countries, which supposedly may play a role. But nothing helps; it seems, there is a wall between cinema and television, which young people definitely cannot break or bypass.

For years, I have asked for a small cinema hall, where the Golden Apricot will be able to regularly screen films, organize discussions, and read lectures. And all this for free.

All we need is a small auditorium — we can resolve the technical issues on our own. We have a huge archive, a library of good films, which we can screen. But for incomprehensible reasons our proposal is refused.

But that doesn’t make sense. Documentary film, after all, can be a good start for discussion — including also among youths.

Film, and especially documentary film, needs frequent screening and propagating. I believe that there should be documentary film classes in school. Film is a way to become familiar with your own country, the people around you, and the world’s concerns.

And yes, documentary films should be frequently shown on television. Every day. But TV stations don’t need this — each has defined its own narrow framework and does not attempt to go beyond it.

I myself have been through a lot, and some consider me to be aggressive and haughty. But I’m always ready to do everything within my means for film to develop and progress here [in Armenia].