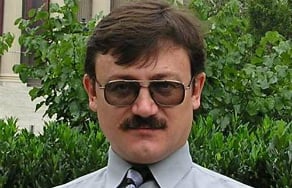 Ukrainian journalist, media advisor Oleg Khomenok describes the events in Kiev as legalized torture — and he waits with trepidation for future developments.

There are opinions that police officers are intentionally “neutralizing” journalists covering the Euromaidan.

Those are not opinions, but the truth. Striking evidence of this is the actions of the police. It’s enough to watch the videos of attacks by the special police unit Berkut to be convinced that police officers aim and shoot at journalists and people with video cameras and tablets. There’s only one goal: to neutralize journalists, to block coverage, and prevent the broadcast of information.

Many testify to the fact that police officers not only use physical violence, but also discredit and insult journalists in every way possible.

Can we expect that police officers who caused injuries and issued insults will be penalized?

I doubt that police officers who used force will be held accountable. The authorities don’t have an interest in people’s right to receive information to be guaranteed and journalists to be able to work in normal conditions.

Information from Euromaidan reaches the public from various sources. In your opinion, how is this covered in the international media? Is it a complete and many-sided picture?

First of all, the tendentious coverage of Russian news outlets, especially Rossiya, is noticeable. Not only fragments out of context, but also blatant falsification is used in their reportages.

Actually, important and interesting information can be very quickly obtained from online media. In the last 6 months, 3 major online channels appeared in Ukraine, which broadcast all the events of the day in real time. Of course, these were live-streamed before as well, but those were more so scattered platforms, whereas now we have fully functioning online TV channels.

What prompted the entry of these channels?

First, the authorities’ control over traditional media increased, which fostered the creation of alternative TV channels. And then, purely in terms of technology, it became easier to ensure the speed of transmitting information.

In 2010, 15 to 17,000 people could watch online channels simultaneously; now it’s hundreds of thousands.

Social media plays a huge role in terms of awareness. The Euromaidan pages and hashtags work in nearly all social networking sites. On Twitter, for example, the number of impressions on that page reaches 27,000 per second; on Facebook, 180,000 per second.

A state of emergency was declared in Armenia in 2008, after mass demonstrations and killings, and the work of the media was restricted by law. Can we anticipate a similar situation in Ukraine?

A state of emergency is declared by the president and approved by parliament. Considering that the pro-government forces are the parliamentary majority, I can’t rule out that development.

Different sources state that it’s possible that quite tough measures will be applied to those gathered at Euromaidan. And that really would be terrible.

In the last few hours, it became clear that the government adopted a decision to expand the list of special measures used against demonstrators and to include dangerous types of grenades, as well as allowing the use of water cannons against demonstrators. This decision seriously contradicts the UN convention and makes the public defenseless.

A legalization of mass torture is beginning in the Ukraine.