“Television is a means of propaganda, which, unlike film, does its work quite successfully” 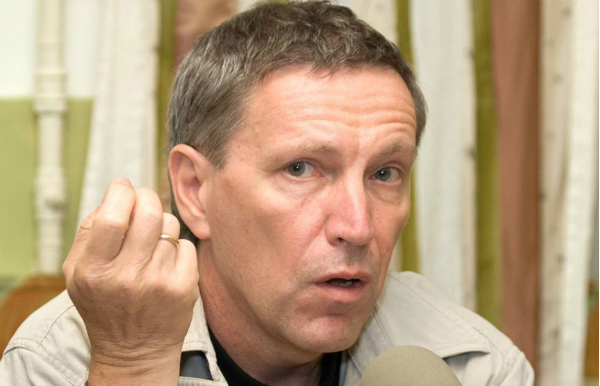 For film critic, author of various books and publications, and storehouse of encyclopedic knowledge Andrei Plakhov, what is most interesting is following the dialogue between cinematography and reality.

Plakhov doesn’t yet see a new wave of film in Armenia, but he places importance on the appearance of a wave and not individual films. In his opinion, it’s necessary to observe the national film fashion regularly arising in this or that country not only from the vantage point of a business plan or an well-carried out PR campaign, but also considering mystical coincidences. According to him, if there are interesting, “live” processes occurring in any country and a new situation is brewing, that country inadvertently captures the world’s attention to its cinema.

European film academy member and honorable president of the International Federation of Film Critics (FIPRESCI) Plakhov is a consultant to various reputable film festivals, compiling festival programs and occasionally being a member of the jury. This year, he was a member of the feature films jury at the Golden Apricot Yerevan Film Festival.

He considers that the increasing number of film festivals in the world often are not so much competitions as an alternative platform for film screenings, since often those films that have passed through the global distribution shaft and have been widely promoted can be viewed at film festivals.

Andrei Plakhov is one of those film critics who actively writes for the press. His articles and reviews are published in the Russian paper Kommersant, as well as professional publications Iskusstvo Kino, Seance, Sight and Sound, the Guardian, and Cahiers du Cinéma.

To what extent does film play a propaganda role? In Russia, film has become equated with state propaganda, since the president himself declared that film has to preach state values.

I think, those are completely empty words. Of course, there will be attempts to produce propagandist films, but no one will watch them. Perhaps there will be one or two exceptions, but films made for this purpose for the most part won’t be successful.

At the beginning of the last century, propaganda through film was quite successful, as it corresponded with the times, the birth of new ideology, but now, in free market conditions, that approach doesn’t work. And the certitude that artificially creating a propagandist film industry will be successful, at the very least, is naive. Even if large funds are invested, that project won’t reach its goal.

Has the work of a film critic writing for publications changed today, considering that the spread of information has accelerated and there are social networks (Facebook, Twitter) where news about films and film events are written about online?

Our work, of course, has changed. First, the nature of timely, print critique has changed. Newspapers themselves have changed; in a broad sense, they are slowly dying. I think I will witness the time when newspapers will become just an artifact in a museum, a rarity.

I think, the time when printing a newspaper might even be considered a lottery ticket is near. Imagine, there are no newspapers, but suddenly one paper is published and becoming a unique event, it attracts everyone’s attention.

Generally, retro is a good thing.

But at this stage there are completely different issues for a film journalist who works on a daily basis. I, for example, write reports for Kommersant nearly every day (or once every two days), but these are often published not in the paper, but on the website. First, the pages of the paper were cut and second, the information reaches [its target] more quickly on the website.

In terms of the urgency and speed of information, you can’t compete with the Internet; I too sometimes publish posts and even write articles on Facebook. It’s very convenient, since I know my readers and I’m sure that what I’ve written will be read and will get a reaction from those whose opinion is important to me.

At the Festival de Cannes, for example, there was an attempt to cover a press conference on Twitter — by question and answer. And it turned out that there was no longer a need for a [written] report or an interview.

Yes, that’s a new type of journalism. Let me say more, at the Festival del Film Locarno, young Russian film critics decided to broadcast live not from the press conference, but from the film screening itself. Every five minutes, they sent short messages where they described their impressions from an episode or another in the film.

They convinced me too to participate in this task, but when I read their initial impressions, I declined, since those posts were like a delirium.

Though such attempts sometimes have absurd results, they are those necessary experiments that show how media changes. And it would be simply unnatural and illogical if we don’t try to use those tools that make journalists’ work more targeted.

I have a negative attitude toward television, since I consider that medium a means of propaganda, which, by the way, unlike film, does its work quite successfully.

Fewer and fewer good films are shown on television; in general, there is no room for art here. Those one or two programs that cover cinema are not serious and are calculated for a primitive audience.

It’s acceptable, for example, to praise the Kultura channel, but I think,  in reality it speaks in an archaic language. If people who were more prepared and armed with new information [IT] tools produced it, perhaps it would be possible to avoid the cultural archaism of the language.

Of course, television likewise is a disappearing medium, but it won’t die as quickly as newspapers. In any case, the future belongs to the Internet and the new media platforms developed on it.

New technologies completely changed the news media sector. What effect did they have on cinema?

I’m sure that the rapid development of new technologies stifles cinematography — especially now, when auteur cinema has become (if it can be said this way) even more “auteur-ish”, abstruse and a pseudo-science, completely being cut off from the audience and reality.

But perhaps [the new] technologies not only stifle, but also stimulate [cinema]?

On one hand, of course, they stimulate, but in a broad sense they force cinema to develop in the direction not of ideas, but of technology adoption. Now, a film can be shot with even a [mobile] phone. On one hand, that’s interesting, since it allows us to assume that a valuable thing might come out of these experiments.

But I think when creative energy is completely directed on technology adoption, ideas in some way at some time definitely deviate and split.

It’s possible that this is an unavoidable stage that cinematography must go through. And when the technology boom stops, realizing that it’s reached its peak, cinema too will acquire a new quality.

I am waiting for that time when auteurs will ask themselves what that endless technology race really gives them? 3D technology, for example, in a large sense, gave nothing to cinema. Yes, thanks to that [technology], film companies earned more money, but films didn’t become better.

Such is the crisis in cinema, which I think is due also to the technology craze.