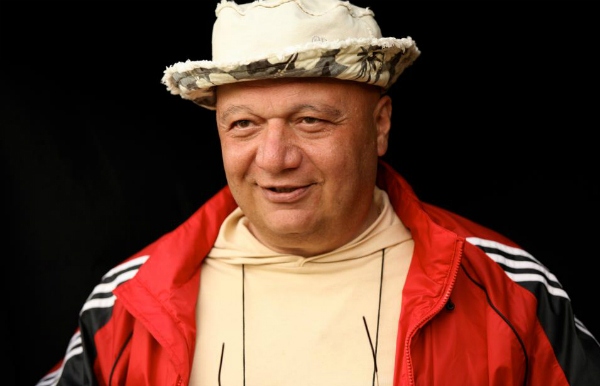 The protagonist of this 13-minute grotesque story is a white baby lamb, who dreams of avoiding his brothers’ fate and transforming the act of overcoming death into a performance, being proclaimed a famous star beneath the shining lights of mass media. This dynamic, humorous film evokes at once different positions — sacrificing and being sacrificed, resisting till the end or comfortably going with the flow.

Vardanyan compares the Yerevan of his youth with a huge social network, where people freely communicated, argued, and philosophized with one another and understood each other quite well. The basis of his first feature-length film (which is currently being written) will be the story of this quite precious city endowed with a network’s magnetic force.

You’ve filmed a modern-day fairytale, but it seems that genre has been left out of Armenian cinema.

We practically have had no experience in telling a story in the genre of dreams, fairytales, or science fiction — in film or theater. All of our stories, it seems, have always culminated purely at the level of the everyday (cheese, bread, tomato), which, to tell the truth, is somewhat odd, since we, Armenians, have a pronounced imagination, though it doesn’t appear in film.

I often say, people, release the fairytale within you; allow the fairytale to speak. Fairytales are actually quite serious and important phenomena, which allow us to understand what a nation, a people with its collective dreams and expectations wants to achieve. A fairytale or a vision helps see the path, the aspiration, and [to gain] perspective. After all, we’ve all grown tired of not knowing where we’re going and what we’re doing.

When you set off on a journey it’s not important whether you’ll reach your objective or not, right? What’s most valuable is the blissful desire to set off on a path.

And I’m sure that no matter how complicated and contradictory our life is today, we need modern-day fairytales.

Reading old fairytales, you often feel that they’re quite fundamental, assuming the form of a parable, and are saturated with intricate advice and teachings. They more so are aimed at adults, and I try to see the child in every adult — to understand what today’s dramaturge, architect, builder, or politician dreamt of as a child, what sort of life did he want to see 50, 100 years later?

After all, it’s interesting what people imagine their future to be like, those who presumably have availed of all the good in the world. And I think, people need occasions and platforms (including also the media) where everyone (from the president to kindergarten children) can share, write, and film their dreams and visions.

There was a great program in Armenia called “Hayastan 2020” (“Armenia 2020”) but it didn’t reach its aim and didn’t gain mass appeal (or rather, it wasn’t allowed to). We very much need such perspective programs now.

Perspectives are tied not so much to Armenia as to outside [Armenia].

We think about surviving today, and we don’t try to take a bit of breath, so that there’s some time to philosophize. By the way, there was a great tradition in Armenia: people would gather in cafes, discuss, and philosophize. Now they’ve stopped [doing that]… years ago, Yerevan was a city of dreamers, which was like a great big network of dreams.  But now, the best dream is to go to a restaurant and develop a project that has a maximum application of two days.

To shape one’s own visions and models of expectations a person has to be free and a little bit crazy, as there’s quite a healthy idea in being crazy and off-kilter (recall the heros of the national epic The Daredevils of Sassoun).

You’re quite familiar with the work of television, the behind-the-scenes. How is television today?

Television has been pushed back from Plan A: the age of a more democratic, free and fast tool — the Internet — has come.

To tell the truth, I rarely watch television: it constantly repeats and shows almost the same trash.

Television, like politics, is a rotten phenomena, which tries to dictate repetition (tautology) to the masses. Of course, it still succeeds, but in general the sector is on its deathbed, since the interactive public no longer feels the need for politicized television.

In all countries television basically transmits a product that plays with our basic instincts. This is so as to make people more controllable. Why create headache and develop spiritual people who have feelings and aspirations? These types of people are not needed; needed are primitive thinkers — It is easy to lead them.

In the film Spitak Garan Yerazy, implied is the role of the leader, the shepherd, of faith.

We often see today that the Judas [the traitors] become shepherds; that is, the leaders showing the way and opening paths (say, those at the head of villages, cities, and even families) don’t understand quite well where they’re leading their flock. There are many families where parents raise their children in order to sacrifice them later. For example, they’re prepared to marry off their daughters with the first rascal that happens to approach them. Well isn’t that sacrifice?

We’ve become so shrewd that we’re prepared to sacrifice our own kin in the name of a fake idea. I don’t want to believe false, fabricated tales.

If a person is free then he answers to his relative, his child, his neighbor. A free man doesn’t have the right to harm, to injure [another].

In every religion, the ideology of God is based on the idea of love. If a person understand this, then the rest is no longer important. The rest only taints it.

How is it that Armenians, rich with humor and an ironic approach, are unable to produce good comedy films, or television programs?

I think, the fact that we have been constantly oppressed, blockaded, and are few in number has resulted in us regretting to laugh at ourselves. Humor, which can be seen in our soap operas and comedies, has become more impudent. It seems, we actually take pity on studying us more deeply and seriously.

Generally, there are types of humor that have a disruptive effect when self-irony, the energy of love, and depth is removed, and only vulgarity is left.

Film, and art in general, first of all is characterized by the energy contained within it. Film is a type of fixed art — its complexity lies in its collective essence. The work of a huge creative team has to come together and culminate in the framework of a film (just like in a painting).

And perhaps a filmmaker’s task is building that frame correctly.

Television, politics, and film production are systemic phenomena, which very quickly rot and decay in the absence of new flows [of energy, of imagination].

After all, if today we are remorselessly deforming Yerevan (and everything in general), proving that we don’t need spaces to dream, to think visually, we are directly destroying our children’s future.  We are leaving them an inheritance full of headache — a country where there are no longer any professionals, and those that are left are clinging to their seats and thinking, there could even be a flood after us [after we leave].

And I would very much like that the ability to dream, imagine, and create not rot for our children. Educated, free, and honorable people are our wealth.