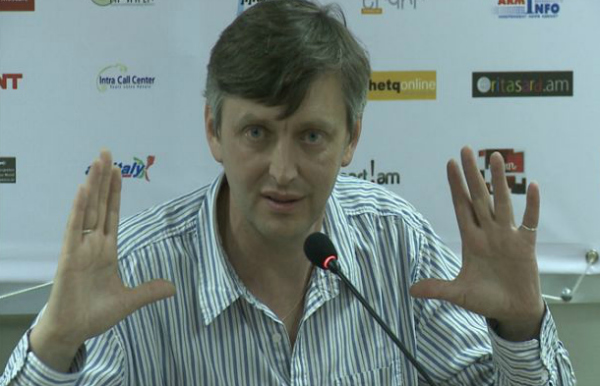 Film director Sergei Loznitsa compares cinema with sculpture: “The rock is the idea, which you work on step by step, and throw away the unnecessary parts. The same is with cinema, where the most important thing is the idea. Then come the scenes, characters, heroes.”

Loznitsa, Belarusian by origin but having studied in the Ukraine and living in Germany, is a favorite and expected guest at international film festivals. A few years ago, his feature debut My Joy with its innovative structure and saturation of depressive reality caused waves. The film received many awards, including the Silver Apricot Special Prize at the 7th Yerevan Golden Apricot International Film Festival. This year, Loznitsa’s film In the Fog was awarded the Grand Prix at the Golden Apricot, after receiving the FIPRESCI prize at Cannes.

Prior to making films, Loznitsa, a mathematician and engineer by profession, was involved in the development of expert systems and artificial intelligence at the Institute of Cybernetics in Kiev. He makes films according to the rules of mathematic formulas — clearly and accurately. And in the outcome, the viewer is left with surprising heated and mixed reactions. The language of Loznitsa’s cinema might terrify and despair viewers into the abyss (as in My Joy) or remind one of the attraction of classic analytical cinema (as In the Fog, which raises the issue of man staying in war), but it definitely doesn’t leave anyone indifferent.

Loznitsa is a cold and meticulous filmmaker, who gives a preference not to the linear development of the story itself but in the study of the environment. “For me, it’s not death that’s important, but the question of how death perceives the surroundings,” he says, commenting on one of the most striking parts in In the Fog — mass murder. For 11 years Loznitsa tried to bring Vasil Bykaŭ‘s 1989 novel of the same name to the screen, confident that aggression and the inner readiness to kill a man are at the heart of war. And this subject is quite current today.

With My Joy, it seems you tried to break free from traditional dramaturgy and you created the film anew. While In the Fog turned out to be a film that develops according to classic rules, where real (in the classic sense) heroes live.

There was no hero as such in the film My Joy; he was simply a guide in the space. The film depicted a space, the structure of which falls apart when social ties are broken — trust disappears and instead there is animosity and aggression… While the main character in In the Fog is a hero, who makes a decision and takes action. Yes, to some extent, it’s an epic story with a classic structure, the center of which is the hero’s fate. In this film, I’m creating the story — not dismantling it.

Flows of information have become extremely accelerated. How does that impact man’s self-awareness?

I won’t be revealing a secret if I say that every second of our lives is surrounded by flows of information. And their effect depends specifically on people. It’s been a long time that I, for example, haven’t watched television (it simply doesn’t interest me); I don’t read newspapers (with the rare exception); and I view the Internet mainly as a gateway to a vast amount of literature. I often buy books online.

And is cinema changing under these circumstances? One view holds that films are mostly becoming audiovisual products.

I don’t agree with that view — cinema, as well as painting, literature, music and architecture are firstly embodied ideas. And if ideas exist then that already is a creation.

The spread of digital tools made making films easier. But did this help, in fact?

Film is an illusion, and much depends on good quality images. If you want a good image, good audio and good acting, then you won’t shoot a film with a mobile phone. Finances and good equipment are important in film. At the end of the day, film is based on a completely different perception. Of course, Beethoven’s symphony can be played also on an instrument with one string but it will be a completely different piece of music.

Resources are important because they enable [us to do things]. Money is feasibility, nothing more, since mastering the language is necessary in order to create.

You said that television for the most part changed the language of film. What happened?

When television became the main commissioner of films, the language of films essentially changed. TV channels began to dictate what they wanted. And that was mainly largeness. Generally, largeness (greatness) is an element of film language, but imagine there exists a processor and suddenly one of its elements begins to dictate to the processor — say, the cord. This demanding cord wants the calculation rules to be amended hereafter or, for example, the number of registers. It’s simply not possible. But this is pretty much what’s happening with our cinema. I call this incompetent interference. But what to do? This is how it is.

Television (video) not helps but interferes with film, since it doesn’t allow working with long and overall shots. Video likes big shots while film avoids these.

You’re a master of long film shots; don’t you think that the slow, “flowing” film pace is often not perceived by audiences accustomed to the speed of short clips?

I strongly disagree with this idea. Next to fast films full of 3,000 edited scenes are many almost “unbearable” films of long shots. And they are magnificent films where the depth and value of a shot is felt.

To tell the truth, the phrase “clips thinking” for me is incomprehensible. Does, for example, Artavazd Peleshyan, whose films have a very fast pace, think in clips? After all, if there’s thought then it doesn’t matter how it is. The important thing is that there’s thought.

Russia’s influence grows daily in Armenia. And to put it mildly, not all Armenians are pleased by this since Russia is not one of the best examples to emulate. In your opinion, how will Russia (and presumably Armenia) look like in the coming 10 years?

Ohhh [laughs]! Everything is so unpredictable in Russia right now that it’s impossible to make any kind of logical forecast. In any case, the situation in Russia today doesn’t differ in any way from the situation in 1917, 1930, 1940, and so on, and so on. This is one line, which is still ongoing. If we examine events with historical forecasts and place them on one line, we’ll be convinced that from the point of view of ideas and nature nothing new has appeared. Nothing.

Will there be something new 10 years later? I don’t know. But if this constant process of “nothing new” continues, only the degree of “nothing new” will change — essentially, it will remain the same. If we compare, for example, Soviet and modern Russian cinema we’ll see many similarities. But the degree of decline and decay of cinema today is incomparably great. Probably it’s the same situation in any sector.

Politics often suddenly and sharply infringe upon a creator’s life. You, it seems, are able to refrain from the political arena.

Politics are not politicians but people. Politicians are in the arena only because people think like that. And this is where the problem lies. We can criticize politicians or scream that they have to leave, but what can we do about people? We can’t change the way they think with one move or one click, can we? They will continue to think the same way as they have done for years. And they’ll make the same mistakes.

Nationalist ideas are often built on fear. I think, in both Russia and Armenia, this is the case: the authorities say, elect us or things will be bad. Stability will be undermined, for example…

The idea of instability as the cornerstone of the world’s existence has long been proven. 1977 Nobel Prize in Chemistry laureate Ilya Prigogine proved that the world is from the start unstable. So the conservative idea of stability is deeply flawed. We have to get accustomed to the thought that the flows surrounding us which are called life are constantly changing. And any attempt to block those flows won’t be successful and will always fail.

You can, of course, create a situation of degradation, which will leave the illusion of stillness/quiet/composure, but all the same, that situation will explode sooner or later and will lead to far worse consequences than can be predicted. This is the most important conclusion, which is made by chemistry, physics and any science in general. This conclusion is known but accepting it is difficult. It’s a question of consciousness.

The fear factor is very clear. Fear is one of the main motives of man’s existence. All government is built and survives on fear. And if the balance of fear and agreement is preserved then government is also preserved. But if fear begins to surpass the intrinsic agreement (we withstand the government only because we fear it) then the government collapses.

You know, it always interested me — what will happen after? Say, the government collapsed. We can’t sit around and wait for manna, can we? I think the source of manna is man; more accurately, each person’s worldview. Apart from ourselves, no one can give us anything. We ourselves create ourselves. From above it’s easy to blame people, but to understand that government is an ethereal substance is difficult. It is this awareness that is absent in Russia and in Armenia — and everywhere in general. Even Germany’s and France’s problems are internal. To save man he has to change inwardly. And education is the only road to salvation.

I’m sure, as well, that the pillars of education for any person are mathematics and music.