‘A festival’s resonance depends on journalists’ 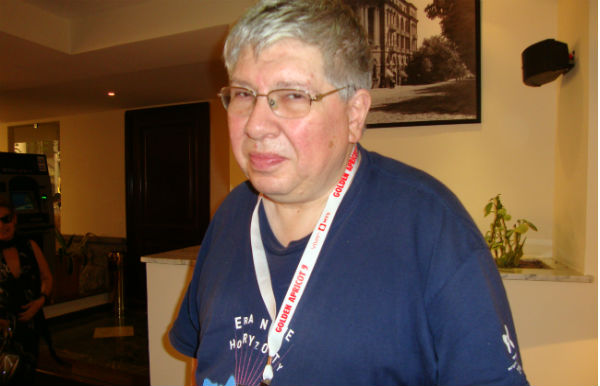 Film critic, cultural researcher, and Moscow International Film Festival Program Director Kirill Razlogov comes to Yerevan nearly every year as an honored guest of the Golden Apricot International Yerevan Film Festival and is very well acquainted with the current issues of Armenian cinema. His accurate and often unexpected observations and advice are always helpful for Armenia’s film producers, as they’re specific and applicable.

For 11 years, Razlogov has been hosting his “The Cult of Film” program on the Russian Kultura channel, trying to make art house or what he calls “confessional” film available to broader audiences.

Also the director of the Russian Institute for Cultural Research, Razlogov is sure that one should able to use all media platforms to make good cinema available to the masses. For him, the word “masses” doesn’t have a negative connotation at all, since he means not only films, but also the broader understanding of “screen culture,” in which everything fits, since we all get the information we need from the screen (monitors, telephones and various other devices).

To get international recognition, what is more important for a film festival — good films or the news media actively promoting them?

Both are equally important. Media tools underwent a radical change in the last 20 years, becoming the important force thanks to which film festivals exist. Cannes International Film Festival, for example, wouldn’t exist at all if it weren’t for television, remaining a platform purely for film professionals, since the ordinary viewer learns about film screenings and guests only through the media.

Any film festival that wants to be reputable as much as possible has to expand and deepen the media space surrounding it. Of course, I understand that for Yerevan’s Golden Apricot film festival this is hard to do, since it’s associated with additional expenses, but perhaps it’s necessary to invite more foreign journalists. Now I’m looking at the festival’s day-to-day and noticing that video cameras, photographers and media liveliness are very few. Meanwhile, these are very important factors for any festival.

And since the media revolution has already happened, and there’s heated competition between television and the Internet, perhaps it would be right to place a bet especially on the Internet. There’s a very good practice [already put in place elsewhere]: during special festival days bloggers are called upon and are invested (also financially) to create an overall reflection of the festival on the Internet, writing about films and events in various languages and for users of all ages and different preferences. And whoever uses this opportunity first, wins.

Does the Moscow International Film Festival collaborate with bloggers?

Unfortunately, no. The Moscow festival has an administrative and political leadership and continues to live in the world of television. The most important thing for our festival is showing the opening and closing ceremonies on the First Channel. Of course, it is although an outdated, but all the same active approach, and television still beats the Internet (the proof of which, by the way, was the recent elections in Russia).

Television is an effective means of preaching, which is why the Internet is often overlooked. I understand that the Internet mainly emphasizes the festival’s weak aspects, which are hard to hide, and to show the festival’s strong sides effort needs to be exerted, which we don’t do… Perhaps we have no more strength.

Meanwhile, if you continue this way, you will undoubtedly lose.

I think that the main weakness for both the Moscow and Yerevan film festival is not realizing the role of foreign journalists. Especially those journalists who, visiting a festival, will write about it in major publications later. Anyone who comes to Yerevan leaves very contented and describes his experience in various places elsewhere, but these people are not many and don’t always work for reputable media compani

It’s great that [Russia’s] Kultura and Mir TV channels are broadcast here, but, all the same, I think that the Golden Apricot deserves more.

About 300 journalists were accredited in this year’s Golden Apricot, which is a big number for our country.

And in Moscow’s film festival, 3,000 journalists were accredited. So what? Among those journalists are also foreign correspondents, who work permanently in Moscow and mainly cover major public events — elections, floods, shifts in politics. As a rule, they cover the work of the festival without watching or analyzing the films; they don’t even follow the program and don’t feel the need to get interviews.

Their main issue is finding scandals, and especially scandals connected to manager of the Moscow film festival Nikita Mikhalkov (which aren’t few). This year, for example, all were interested in why Russia’s Minister of Culture, in presenting an award to [French actress] Catherine Deneuve, didn’t give it to her but took it off the stage with him. All news outlets wrote about this — even I wrote about it, sympathizing with the minister and noting that perhaps the man had become flustered, finding himself beside the star for the first time.

Does the presence of film critic journalists make the festival more attractive?

Not general but very specific journalists should be invited. And especially those who work in film journalism. I’m sure film critics from Georgia, Iran and other neighboring countries can be invited. Of course, there are many film journalists, but few will come to Yerevan on their own dime (the only festival film journalists go to where they cover their own expenses is Cannes). I can say that the Golden Apricot is covered quite well in Russia, but I want to ask: why isn’t France’s Le Monde or the UK’s the Guardian here?

I mention these papers because they have their own film journalists. Of course, the festival doesn’t have a big budget, but what’s important is accurately assessing the situation. If going to Putin with movie stars and being seen on the First Channel is important for Nikita Mikhalkov, then a good atmosphere and human contact at the festival is important for [Golden Apricot Film Festival Director] Harutyun Khachatryan. At the end of the day, a festival’s resonance depends on journalists.

When major media outlets write about you, do you also become large-scale?

Yes, and this is the case in all sectors.

How do you assess the media industry in Russia? And, according to you, what is the measure of media freedom?

One cannot live in society and be free from society, as Lenin used to say. All of us depend on someone or something. But strictly observing life, I can say that however small the audience of a communication means is, the more free it is.

Print media is absolutely free and independent — newspapers in Russia can write what they want, since backing each of them are corporations with various interests. But if the “wrong guy” is found at the reins of a TV channel he is quickly cast out and replaced with someone new, someone more loyal to the ruling authorities.

Finally, the most free in the media industry are bloggers, especially those whom no one recognizes. But if you become prominent like Alexey Navalny, then already you’re less free.

New Armenian films are traditionally screened at the Moscow film festival. What sort of reaction do they receive?

Of course, not very big, but there is some reaction. In any case, the Moscow press writes about Armenian films. But don’t forget, during the Soviet years too Armenian cinema wasn’t in the leading places, and now, when it produces 1–2 films a year, it’s hard to create a good film.

A few years ago you said that it would be advantageous for Armenian cinema to shoot a retro film, due to which several historical layers could be shown at once.

Especially interesting are the stories of Soviet Armenia’s first years and the role of Diaspora Armenians (many I heard from my grandfather, diplomat and Minister of Foreign Affairs of Soviet Armenia Alexander Bekzadyan).

But it’s important that the main character in this would-be retro film be young.

I think that the new generation will save Armenian cinema, if, of course, that generation decides to get into film. It’s important that the filmmakers be Internet-bred and work in new technologies. In Armenia, you have a great school, where instruction is associated with mastering technology.

Yes, the children studying there are completely different people, whose preferences, taste and thinking are very different from those with a Soviet way of thinking. And it’s their view that will allow looking at Armenian history (and also the Genocide) from a new angle. Wait until this generation grows, develop their horizons, and you will witness the revitalization of Armenian cinema.