‘Media site has much more responsibilities than just a blogger’ 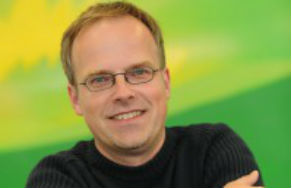 Nils Leopold is a senior adviser in the German Bundestag for the Green Party. He was invited to Armenia recently to speak at a TOT for journalism teachers titled “New and Alternative Media: Ethical and Legal Problems,” which was organized by the European Union and the Armenian Online Media and Journalists’ Association.

Nils Leopold places great importance on personal privacy and data protection, particularly in the Internet. He finds that those who violate such laws have to be held legally accountable, while the personal data that has been published online should be removed immediately.

In Armenia, certain journalists and websites take other people’s Facebook statuses and publish them. And in most cases these people are not even informed about that. This is widely practiced here. Are there any ethical or legislative or privacy issues?

If you mean with statuses all the content that is on a Facebook page, you would definitely have a problem in terms of legality. So just copying from a Facebook page and publishing the text on your news website or whatever will involve a number of legal problems. So it will probably be an infringement of property rights when you have protected content on the Facebook page that someone uploaded there and you will have a personality rights or data protection problem when there is data on the Facebook page which is personal and you would need a consent from the Facebook user.

So, yes, definitely this is an illegal practice, according to European laws and standards. In many cases, content on the Facebook page will include personal data, which you cannot expect someone to just want to have on another page and when this is happening, you are infringing personal privacy laws.

If your private data is used by a media outlet, you should think about talking to a lawyer and checking the case. If you can’t afford it, which is often a problem, you should think about writing a letter to the news website and demanding to delete that page and erase all your data and once you have received a letter with a response, actually telling you, no, we won’t, it’s our right to do so, then you have proof in you hands, written proof, with which you can go to court.

The Internet has always been considered, at least in Armenia, as a place where one can be free and safe. Is the Internet а place where you can say/write/do whatever you want and go unpunished? Are you totally free or does freedom have borders?

We all like to keep the Internet as a place of freedom and democracy where you can author your thoughts as free as possible. The value of the Internet is undisputed in this prospective. But the Internet is meeting reality these days and the law applies more and more to different kinds of ways on how people use the Internet. In my country and in most European countries, there are many court cases involving all kinds of legal questions.

So there are definitely limits set out by the law for the way you use the Internet and how you treat the information there, but there is also still a big issue about actually being able to enforce your right, because it’s often very hard to get the people behind the website, to get someone who is legally responsible.

Sometimes you even get someone who is responsible but he is broke, he does not have any money. All he does is just upload pages and he is unable to pay damages, for example. So one thing is getting your right recognized in court and the other thing is to enforce your right, which is a big problem. Think about Facebook: Facebook has been challenged for breach of privacy rights many times and it’s very hard to get them. They are located in Ireland, and Irish laws, which apply in their case, for example, in privacy cases, are not of the same standards we have in other EU-countries, even though data protection is harmonized by a directive (full transparency of how your data is being processed, full right of consent, so Facebook will have to ask you any time they are trying to profile your data, data security issues, and so on).

A person (an attorney) in Armenia launched a libel suit against a local daily for comments left by readers on its website. He demanded approximately $47,000 in compensation! The court rejected the lawsuit. But who is responsible, the news outlet or the commenters?

If it’s a clear case of a comment on a newspaper website, which has a clearly defamatory content, then there must be a strict liability of the newspaper site to take down the comment the very moment they get the info about the comment being defamatory. The reality in European countries is once the web page knows that they have this content on their site they are liable and it’s especially true for newspaper sites and media sites, because they are in a way looked at as an objective source and I think this objective source thing also reaches this fear of the comments.

The comments are, of course, marked as something personal but in the context of the newspaper website they have more value attributed to them, so a newspaper has to distance itself from the comments and they have to take these down, and if they don’t do so, of course, they can be charged with a fine. If it’s a really established site or news media site they will definitely have other responsibilities as a blogger, so an established media site will have to sift through complaints and they have to check legally for themselves whether from their view it’s a defamatory statement and then they have to take it down.

They have much more responsibilities than just a single person, blogger or a journalist doing it on his private page and having comments on that page. When someone approaches them and says this is defamatory, simply not true, then this would apply, from my view, as a notice and take down — there is an argument on a certain comment and someone argues that it’s even illegal grounds. The mere fact that someone is claiming that this is happening leads to a takedown procedure.

That’s actually a practice even with Facebook: they have a notice and take down procedure for things like that and you don’t even have to give proof; you don’t have to have a court order in order to make them take down certain information. They would just react to your notice and your claim.

Plagiarism is also widely spread in Armenian media. Copying and pasting articles from other sites has become a common thing. What to do in this case?

It’s serious. In most industrial countries, there are many cases concerning copy-paste and copyright.