“Negativity Toward New Technologies is Outcome of Soviet Modernism” 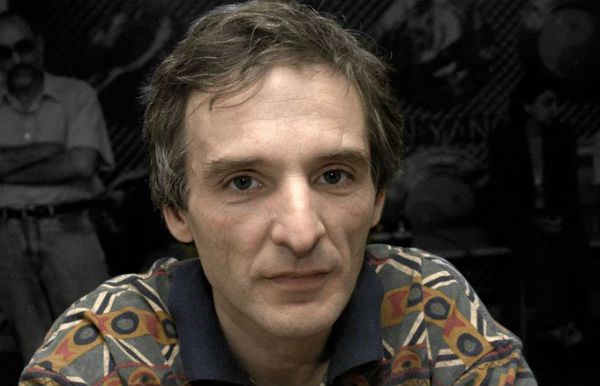 Artist Arman Grigoryan reminds us that evolution is conditioned by technological advancement. He advises those who like the old world and the idea of returning to pay attention to the technology used by man in their favorite era — the work tools and weapons. Also the media, which is both a tool and a weapon.

Is the active application of media a sign of evolution?

For me, the word “media” is associated with artistic technique. We use this word to describe what technique a work of art used. There is classical media, oil paints, watercolors, bronze sculptures and so on, and there is new media, which is applied in contemporary art — video, photo, performance, installation.

The way I see it, media is an area where reality is analyzed and new ideas are born. In this sense, our media is quite constrained (even Facebook). In any case, media (including social media) that conveys progressive ideas is few — mainly people are trying to “digest” the gratification of becoming acquainted with one other. And this is more so an egotistical issue: public thinking isn’t as developed to be able to analyze the perceptions of the post-industrial world.

Digital technologies have accelerated communication and changed perceptions of time and space. Man’s perception of himself has changed. Many of us have blogs or our own channels, but the problem is that it’s difficult to make serious policy inroads through the internet since not all regions in Armenia have an internet connection.

The second generation’s modernism, which is also called globalism, is symbolized as follows: a grandmother talks to her grandchildren abroad via Skype. I think this is a spectacular image.

Borders being open or closed actually isn’t so much tied to the physical. Of course, I, as an artist, am in favor of all borders being open (a person should be able to go to any country whenever she wants). But globalism opens borders only for trade and financial transactions — not for people.

The role of media is particularly great in the case of opening borders. We are no longer in a closed space.

When the world appears in your home, unwittingly a conflict arises because a revolution of thinking begins. And this revolution is not a matter of grants or anyone’s evil intent, it’s a matter of working relations. I assume that these stereotypes emerged from the approaches of intellectuals, who insist that Armenia should be a spiritual country — without new technologies.

Does one interfere with the other?

What’s interesting is that cliches easily find their way into our life. For example, it is said that Armenians by nature are not innovative; they’re conservative. But the reality is completely different. We say, for example, that Hrant Matevosyan is a writer who idealizes village life, but this is not true. Matevosyan was a man who politely said goodbye to village life; in the village he pictures there are no prospect, no children — everyone is moving to the city. That is to say, the main issue in Soviet times (eradicating the difference between village and city life) is resolved to the detriment of the village. Matevosyan considered the Armenian patriarchal village unpromising, but we now are sure that he lamented the death of the patriarchal village.

There’s an impression that the public expects a lot particularly from journalists. In Russia, for example, journalists are part of the public avant-garde. But in Armenia?

Gilles Deleuze was sure that today’s philosophers are journalists because it is journalists who are given the chance to generalize. A journalist is both inside of life and is able to generalize it [from outside of it]. In Armenia, there are two types of journalists — revolutionary and anti-revolutionary. An anti-modernist [i.e. anti-revolutionary] is he who believes that nothing can be changed — however it’s been is how it will continue to be. While a modernist [i.e. a revolutionary] is he who says I don’t know how this situation was created, but it has to change because it’s not convenient. And by the way, his arguments might not be convincing, but they are definitely contagious.

And what role does television have? Many complain of the locally produced TV programs and soap operas.

Observation is usually preceded by choice. But television is someone else’s choice, which, to tell the truth, angers me. Personally, I don’t need television, though I understand quite well the huge role it plays in the ruling discourse.

Television emerged after WWII when there was a desire to create a more open, individual-based society. This media technology is connected (but intuitively) to the logic of the world’s development. It’s the same as, for example, the Armenian prime minister’s utopian dream to turn the Armenian town of Dilijan into a financial center.

Couldn’t the idea of this center become a reality?

No, because it’s tied to ownership. This is possible to do in those countries where property ownership is accessible a large number of people. The more the number of property owners, the more the number of collectives created on a unified principle and that are jointly owned. But television is an industry which “produces” individuals but doesn’t give them a certificate of ownership. On one hand, programs such as reality shows are great (it seems that people are individualized), but on the other hand, actually they are all brought to the same standards. Everyone on these shows says the same thing — there are no original thoughts.

Television is politics. Say, population growth needs to be encouraged; certain political steps are taken. Well, not only calls and slogans (“Come home”, “Armenia is you”), but also examples are needed that show the kind of families and individuals we want to have. If we constantly show on screen people who eat, drink and destroy their surrounding environment and nature, it’s obvious that the demographic problem won’t be solved — on the contrary, human “desertification” will take place.

In Armenia, television is controlled by the authorities. Is this really necessary?

The authorities are threatened by live broadcasts. Soviet authorities simply didn’t allow second or alternative opinions on television, while in the Western world these served only business interests. It seems now that we have successfully merged these two functions and received a soap opera–like product, which is constantly trying to tie man to the TV set. There are people who immediately turn on the television once they enter their house. This way they ensure the effect of presence (society is in our house). But television has a competitor — the Internet. And, by the way, the faster the Internet, the stronger a competitor it will be.

Armenian television, it seems, is a mix of glamour and rabiz — even the news is served up as a glamorous music video.

Actually, glamour is the same social realism. Glamour is the modern, social realistic market kitsch, which is perceived by ordinary people as an alienated, unpleasant thing. Glamour tries to convince you that if you have money then the world is yours (though this isn’t so).

Russia’s influence is very great on our television — we borrow a lot of things from Russia (including glamour).

What is rabiz and why is it such a stronghold in our culture?

Rabiz, which was a 70s phenomenon, is a type of person cut off from the village environment who finds himself in the city. At that time, Yerevan began to expand, and conflict between the rabiz and the progressives appeared in political culture. That is to say, those with long hair (say, the hippies) found themselves in clashes with short-haired people in black. The village under patriarchal and religious influence was falling apart, while the industrialization of cities was happening in an accelerated and repressive fashion. And those with a patriarchal mode of thinking, not feeling comfortable in the city, tried to preserve their perceptions. And this is how rabiz with a touch of sentimentalism emerged. It’s interesting that later, rabiz weakened, but in the period of Armenia’s independence it became stronger, mixing with reaction religion.

A type of rabiz has emerged that aggressively resists the modern world. If we’re unable to overcome this resistance, Armenia will truly empty of its citizens. Who needs a country where people, not being Caucasian, perceive themselves as Caucasian because this is how the Russians, with their imperialist view, see them? What is the film “Mimino” about, for example? Two dumb moustached men in a developed, industrialized city. That’s how they see us.

It seems we’re not opposed to that view, and we too portray ourselves this way (semiliterate, ridiculous, loud and empty) in films, programs, soap operas.

That’s called internalized colonialization; that is, we see ourselves as a national park (or zoo) where tourists come and look at us. The bureaucratic system understands culture to ethnic restaurants for tourists. And such rabiz perceptions is internal colonization.

When you see a new cultural element, you immediately want to take it and use it. New technology, new culture is something that people take voluntarily. Well, no one crammed mobile phones in our pockets, right? People have that need for ownership.

Again I say, the greater the number of property owners in our country, the more people will remain in Armenia. Erich Fromm claimed that if one doesn’t have property, he cannot share with others. And if you don’t have anything to give to others, you become a miserable person. At the end of the day, man’s happiness lies in being able to share even something very little with others. But, of course, that sharing process is self-willed and not forced.