After the Burst of TV Soap Operas and Comedies 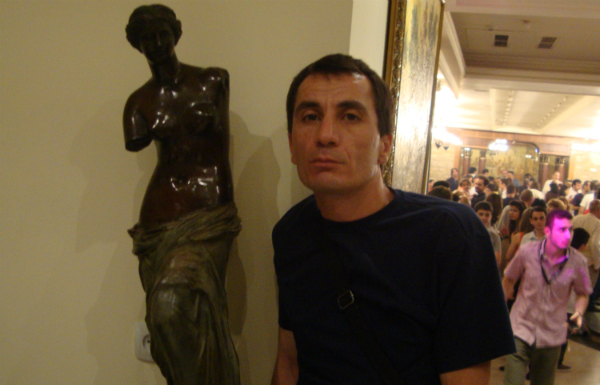 Filmmaker Aram Shahbazyan is sure that soon there will be a new kind of cinema. The viewer has already become satiated with poor quality and prolonged TV soap operas, and TV stations are ready to invest money into film production. According to Shahbazaryan, the  burst of comedy films created by television entities fosters the development of film. And it is still fostering it.

Rarely are good artistic films screened on Armenian television. Often a film is depreciated also because of bad dubbing. The choice of what films can be regarded as the best method of publicizing film?

Television has to try to publicize art house films, especially domestic productions. By saying art house, people, for some reason, understand boring, lengthy and incomprehensible films. Meanwhile, it’s a good story having something profound to say.

The best way of spreading propaganda is participating in the production of films, as is done in European countries. By participating in the creation of the film through shareholding, the TV station expects to have the screening rights to the project. And the extent of participation has no significance whatsoever (it might cover 5 or 10% of the film’s budget); what’s important is the phenomenon.

In pitching a film project to this or that fund, us film directors with European film foundations usually mention local financing. And it never crosses our mind that we can note the name of a local TV company. Meanwhile, in European packages there are usually 3–4 different TV companies as participant-funders. Of course no one wants TV stations to finance 100% of the film — let it be a symbolic amount, but let it be.

But now many TV stations are funding and producing their own films.

I am referring to films intended for international screening (European co-productions) and not about local commercial projects. Domestic films can be publicized only by participating in the production of films having global leasing.

And what did soap operas contribute to film?

Apart from distorted thinking, soap operas contributed nothing to film.

To tell the truth, in shooting Mi Vakhetsir, I had great expectations: I was waiting for TV stations to turn their attention to film production. Even the soap opera’s success or failure I was tying with TV station’s future steps. If Mi Vakhetsir flopped, the stations would be afraid of reverting to film, but if it succeeded, there would be a chance to move from soap opera to film.

Regretfully, Mi Vakhetsir didn’t bring with it a good tradition. In fact, it brought a very bad tradition, since the stations began to constantly devalue the work of soap operas — completely moving away from cinematography and breaking up the story into 600–800 episodes. If the TV companies decided to film 2- or 4-part soap operas, then it could be assumed that soon they would arrive at the idea of filming feature films. But that didn’t happen: only the soap opera was put to work and not the thinking and esthetics specific to cinematography.

It’s even quite ridiculous when you see the same actor in different soap operas is, in truth, playing the same role. The shows are different, but his traits and characteristics are unchanged (say, the same cigar, lexicon and even the same hat). And in this way, the same character roams from one soap opera to the next — adding nothing to the story.

Producing comedies has become en vogue and lucrative. Will this last long?

The growth of independent film production companies is a sign of progress. The more private studios and film producers there are, the faster we’ll get closer to film. It’s great that TV companies are producing films — the boom in comedies ultimately fosters the development of film. Fiance from the Circus and AlaBalaNica, in any case, are better than the Mer Bak (“our yard”) series.

It seems to me that after some time, there will be a new kind of film. And that faster it comes, the faster the crude comedies’ bubble will burst. Only one criterion is at work in Armenia’s current reality. All the films are similar to each other (in many cases, it’s the same people who are the films’ screenwriters).

I’m sure that if films in the comedy genre that are closer to cinema are produced in the near future, the situation will change. The person who takes a few steps toward cinematography will bring new standards. Then film producers and audiences will begin to think in those standards.

But superficial comedies, for the large part, have an audience — as do vulgar comedy programs and soap operas.

All TV companies and soap opera and film producers have invented one slogan: “That’s what the people want and that’s what we give.” This is self-deception — you shouldn’t underestimate the viewer and think that you have to produce films full of simple, cheap tricks.

If for five years, better quality films were shown on both the big screen and television, viewers would simply stop watching that which is currently being offered to them. And low-end comedies and soap operas would become an incomprehensible and impalpable thing.

Try to tell a good story in the language of cinema and you will definitely have an audience. And it makes no difference what genre of film you’ve produced — comedy, tragicomedy or drama. If you tell the story well, the popcorn-eating viewer will watch it with interest, tune in, and finding herself in the world you’ve created, come alive with its characters.