Robert Parsons. “There is a serious deficit of honest, objective information in the Caucasus” 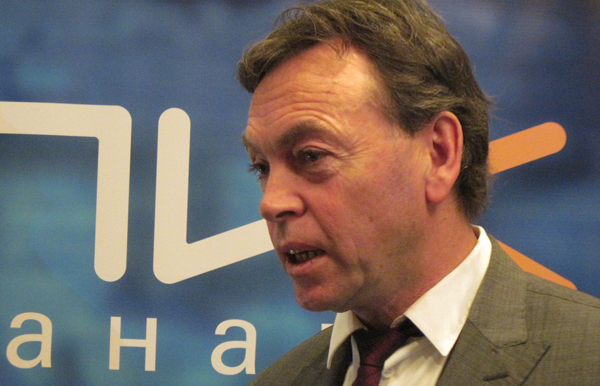 A rebranded Russian-language channel of the Georgian Public Broadcaster, Perviy Informatsionniy Kavkazsky (PIK) (First Caucasus News), formerly known as the First Caucasian Channel launched broadcasts on January 25, 2011. The heads of the newly opened television held press conference in Yerevan, the main purpose of which was to raise awareness of the television station among Armenians  and  to attract Armenian journalists to work for PIK. PIK Director General Robert Parsons stated that the First Caucasian is firstly Caucasian rather than Georgian and that it provides only independent and unbiased information.

Mr. Parsons, both in Russia and in Georgia, First Caucasian is considered as part of the politics and propaganda of the Georgian authorities since it is broadcast by the Georgian Public Broadcaster and the Georgian government has allocated 13.3 million lari to finance the PIK.

All I can say is when I came to work here or my colleagues came from UK with me to work here, we were given a promise that will be no editorial interference in our work. And I can say that in 6 weeks since that it has not  been a single case either pressure or interference from the Georgian government. Nobody has picked up the phone, nobody has pressured any of my correspondents. We have had complete independence. And now despite what others might say, we’re often very critical in our news programs, in talk shows, and in what is going on in Georgia. So far so good is all I can say.

The real answer to your question is you can watch us any time you like, you can go online even if you can’t get satellite and you judge yourself. You can go online and watch. But I’ll be very surprised if you find us to be pro-government.

Your first guest on new channel was Mikheil Saakashvili. Why him?

That’s true. It was a coincidence of dates more or less. He knew we were starting at the end of the month and he was  doing his annual Q&A with the Georgian people. He wanted us to do that. But the reason behind it I think was that it should be a promotion of the channel in Georgia. Although this is a channel primarily broadcasting  outside of Georgia to a non-Georgian audience. And still, nevertheless, it’s a Georgian project and it makes a lot of sense since the Georgian people should know about this. It was a publicity drive for the Georgian population.

Since that time (this is important- this is what you have to judge yourself- you have to judge from the content), you don’t see Mikheil Saakashvili very often on our channel. It was actually even before our launch. Our launch was minutes after Saakashvili’s Q&A finished. And since we started I think you’ll find we’re an extremely balanced television station. I’d be very surprised to be compared otherwise, but I’m quite certain you’ll find that we’re very balanced and we’re critical to the Georgian government- well, we think it deserves to be criticized in the same way as we’re critical to anybody else’s government. We try to show the good as well as the bad.

And our channel is not primarily a Georgian channel – we’re commenting on events in Armenia, Azerbaijan, the North Caucasus and also the rest of world as well. We’re not concentrating on Georgian news. We see Georgia as part of the Caucasus-  it’s no more or no less important than Armenia or Azerbaijan.

Why do you stand for unbiased information in Caucasus?

Because it seems to me that there is a serious deficit of honest, objective information in the Caucasus. In Georgia, Armenia, and Azerbaijan either television is dominated by the government or is depolarized. For instance, in Georgia you can have Maestro TV and Kavkasia on one side and,- Rustavi 2, Imedi and the First Channel on the other, which provide different sides of the story from completely different perspectives. All we’re looking for is television station which is not politicized, and, we are able to create a television station like Al Jazeera or Sky News, and all we’re drawing on our experience is western journalism and trying to create something similar in the Caucasus, cause we believe that’s in the interest of ordinary people – I don’t  think that people in Armenia or Georgia or Azerbaijan or the North Caucasus want to have a “diet” of politicized television.

How long are you going to stay at PIK?

I don’t know how long I’ll stay but my aim is to create a television station which will be able to survive long after I’m gone. I think it’s very important at this stage that it should be foreigners involved in the management of the channel because it gives confidence to our journalists and it gives credibility to the station abroad. I think that’s very important at this stage, but equally important  is that after a period of time the channel should stand on its own without having foreigners there. That point would come when tradition is established at the station. How long it will take, I don’t know, but at the moment I think it is important over here, because a lot of learning has to be done – it’s a very important aspect of what we’re trying to do: training people in not just technical skills but also professional standards of journalism : objectivity, how to take picture-  that all takes time.

Do you train only your staff?

Well, at the moment we do train only our staff, but Melanie (Melanie Anstey, Programming Director General) and I’ve been thinking very seriously about setting up what we call a Training Academy or something like it, which will then open up doors to people who want work for us. The idea will be to try to attract training specialists from the UK, France and elsewhere for training on camera skills, web skills, also writing skills, all the skills of journalism in fact.

Does PIK receive financial support from the USA, as some say in Georgia?

No, that’s wrong, it’s ridiculous. Of course not. Our financing is very transparent . If the people you’re talking about are not lazy, they will go and look it up on the web and see for themselves exactly how much money we get and where it comes from. It’s public information.  It’s money that comes from Georgia, not from the United States. But having said that I would like to get some money from the US, I do not have anything against American money, if I can get USAID or IREX to fund this training program I will be very happy to take it- I don’t have problem with American money. But I don’t have any, unfortunately.

And are you currently satisfied with the financial situation of your television station?

Nobody is ever satisfied with the amount of money they have. I would love to have more. And there are lots of things I could do for the channel if I had more money than I do. But we understand that at this moment this is a public television channel-  Georgia is not a rich country-  we have to work within the limitations of the budget we’ve got. It’s enough for us to get going-  we’re very happy with the level of professionalism that has been shown by our journalist staff, we’re happy with our equipment, we’re well set now in technical service for the next 5 years, but of course it will be an opportunity for staff, with more money we can do more things, that’s one of the reasons  why I’ve been  talking with the Georgian government  about the possibility of changing the legislation in Georgia to make it possible for us to have advertising. I am also going  to the United States  to see if I can get independent funds from the US because in the long term, the more independent money that we have the less susceptible the channel will be from inside and outside pressure.