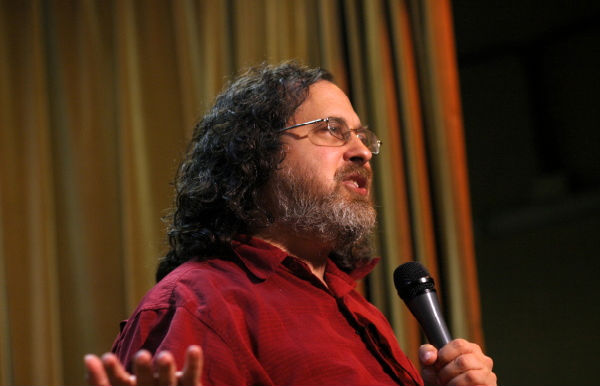 We spoke with Richard Stallman, founder of the Free Software Foundation and project leader of the GNU operating system, a Unix-like operating system meant to be entirely free software, while he was in Yerevan last November. Stallman asked me not to upload his voice on the internet as an mp3 file and to use the Ogg (free, open standard container) format instead. I promised not to upload his voice online at all. At the end of the discussion, Stallman bid me “Happy Hacking!” and entered the lecture hall.

There is a large number of users of unlawful and so-called “pirate” software in Armenia.

So, can we say “unlicensed software” is widespread in Armenia? What shall we do about that?

Social networks are becoming more and more popular — especially for youth, “the internet” and “social networks” are the same.

That is only because they are ignorant. There are many things you can use the internet for and none of them is synonymous with the internet.

They could sometimes. On the other hand, they can be used for tyranny. Social networking sites make it easer for the police to watch people.

Should we use them?

It depends. They are different from each other. As far as I know there is nothing wrong with Twitter. Facebook is a disgusting organization; it collects personal information and thus mistreats its users. So you should un-friend Facebook now if you use it. I’ve never used it and never will.

No I am not, actually. Various people have occasionally made accounts pretending to be me but I don’t use it, I have no time. I am not against it but I am not using it.

And what about Google?

Google does many different things. Some of them are OK and some of them are bad. The search engine is basically OK. I use it sometimes, I use it in a way to make sure Google has no idea who is doing search. I don’t use it for my own computer. Apart from that, looking at the maps is OK. But when I do that I never put an actual address in. I just say what city I want to look up and I look around for whatever street is interesting to me. It gives them less information. I am very concerned about surveillance futures.

It is bad to have a few large companies. The biggest companies of today need to break up. But Google is not acting as evil as banks for instance or Microsoft or Apple. Microsoft and Apple are really bad.

During your previous lecture you mentioned that free software is very important for education. Why is that?

Schools have a social mission to educate good citizens of a strong, capable, cooperating, independent and free society. In computing theory that means teaching people to be free software users. To teach people to be proprietary software users is teaching them to be subjected, to be dependent on the owner of software and that is the opposite of the school’s mission. A proprietary program is the secret knowledge; students are not allowed to learn from it. That is the opposite of the spirit of education. Proprietary software must not be tolerated in the schools. Schools have to teach a spirit of good will, the habit of helping other people. Therefore, every school must have this rule: students, if you bring software to class you may not keep it for yourself; you must share copies with the rest of the class, including the source code.

A question from your last session: You were drinking Pepsi and people commented that  you don’t know what’s inside Pepsi; that is, you don’t know the code of that beverage.

I am not gonna consider making such a thing for myself. The most dangerous [thing] in Pepsi, I know what it is, it’s sugar and that’s why I am having that occasionally. On the other hand, imagine that someone gave you a recipe and told you are not allowed use it or not allowed see it. Imagine that is a hypnotic recipe and it will hypnotize you when you cook something and you wouldn’t know what you did. That is like a proprietary program. Or imagine that you were told you can’t change this recipe or you can’t share copies of this recipe. Pepsi’s recipe is a private recipe. It is like a program somebody wrote and has and doesn’t publish. Proprietary software is like a recipe that someone gave you and said I will attack you if you share it with your friends.