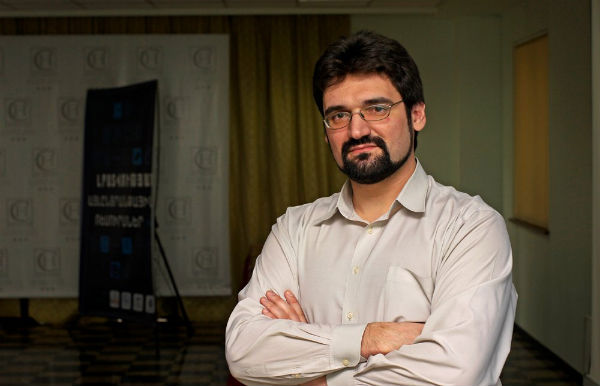 Interview with Research Director at Mail.ru, author of the Russian-language books “Internet Marketing: A Compendium of Practical Tools” and “Contextual Advertising” and leading expert in display advertising in the Russian internet industry Fedor Virin.

Upon an invitation by Internews Media Support NGO and within the framework of the Alternative Media Resources program, Virin read a lecture on the topic “7 Steps Toward Effective Internet Marketing.” Media.am spoke with the expert on prospects of internet advertising and the characteristics of internet marketing in Armenia.

Today the Internet becomes the major means of advertising, which is used by all brands and companies. For example, in the UK online advertising has surpassed TV advertising. When that will happen in Armenia, it’s hard to tell. It depends on your political situation, economy, the will of the players in this market, but definitely it will be, the question is when. If everything goes smoothly, perhaps in 6–7 years; if it goes unsuccessfully, in 10–15 years.

Internet marketing has many options, areas, drives; it has more means. That means it’s more complicated for the expert placing the ad. Roughly speaking, more experience is needed for placing online ads. It requires more education, understanding of approach and ability to analyze. And this is a problem.

The particularity of online advertising in Armenia is that the market now is quite small, and, unfortunately, it will [continue to] be small in the near future, because the number of the population is small. Even with the [Armenian] Diaspora, it’s only 15 million people. This is economies of scale. The Chinese are poorer than Armenians, but there are 250 million, maybe 450 million internet users there [i.e. in China]. Even if each of them were to bring one penny to the advertising table it will be more money than any amount ever brought in by 15 million Armenians.

This economies of scale has to be changed in some way, and to change it in some way, unfortunately, can be done through such means which is still complex for you. That means is called a coalition with neighboring states, cultures, and markets. Small markets have to join together and turned into one large market. A large market is piercing; it’s addressed differently. This issue, unfortunately, is only resolved like this. But first and foremost you must learn to speak on the inside. During the seminars I saw that the participants were very nice people, who, however, don’t even plan to sit together and try to build this market.

In your opinion, how will internet marketing be transformed in the future?

It will cross with mobile. It’s now becoming more interactive, it’s more complex technically and, that which is very important, very personal. Mail.ru already places such ads. Ads where right on the banner all that we know about a person can be written. Yahoo and Facebook also use such ads.

This means that advertising is aimed at a specific person. Facebook knows that not only are you 23-year-old Anna who lives in Yerevan and works as a journalist, but that you have a dog and that dog is a Scottish Terrier, 3 years old, who you love very much and whose name is Vasya. And imagine that you get an ad, “Anna, specifically for your Scottish Terrier, we’re proposing this or that…” This is what’s happening now. Advertising is becoming very individual and personal.

Added to this, mobile, TV, internet, radio, newspapers — all come together and you begin to receive individual ads from all channels. That which I’m describing is not the supernatural, it already exists, it’s simply that the mechanisms are still incomplete.