The Ministry Of Defense Considers It Confidential, Suren Papikyan Publishes It

At the government session on October 27, Minister of Defense Suren Papikyan presented the new system of transition from compulsory military service to contractual service under the name “Homeland Defender․”

The program presupposes that after the completion of the first 6 months of compulsory military service of rank-and-file and officers, the serviceman will be given the opportunity to enter contract military service. The term of service will be 5 years.

With the introduction of this program, the contract service program “I Am” launched at the initiative of the former Minister of Defense Vigen Sargsyan will be stopped. According to Minister Papikyan, within the framework of the “I Am” program, only two servicemen continue to serve, whose 36-month term of service ends in January 2023.

Media.am’s fact-checking team sent a request to the Ministry of Defense in July 2021, asking to provide information about the number of beneficiaries of the “I Am” and “I have honor” programs. We asked to indicate how many people have signed a contract to undergo military service every year since the start of the program until now.

Referring to the RA Law on State and Service Secrets and the Government’s 1998 to the list approved by decision N173 of March 13, the ministry considered the information we requested confidential and refused to provide it. 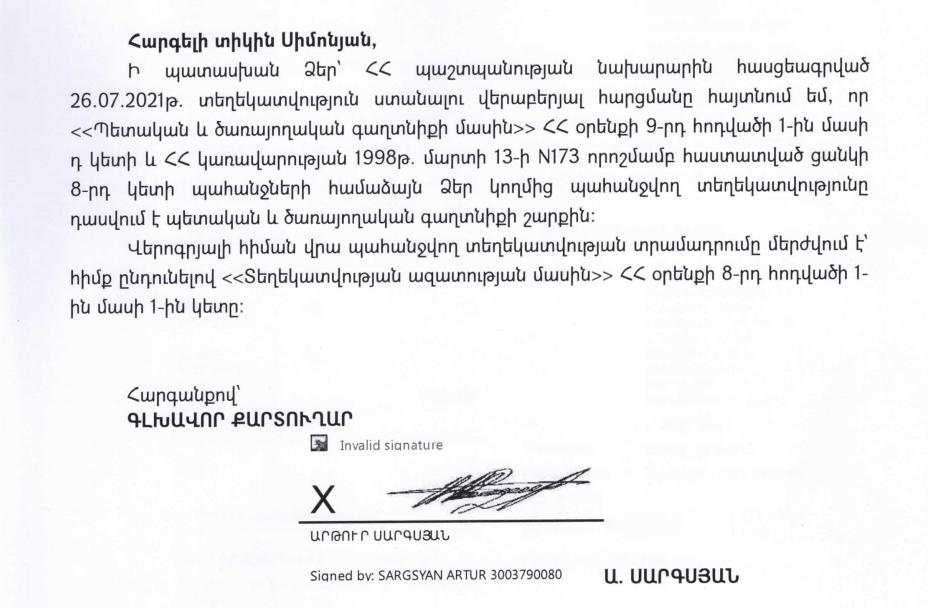 Thus, the Ministry of Defense considered the information that Suren Papikyan disclosed on October 27 to be secret. It is important, however, that previously, the number of beneficiaries of these two programs was published by the defense department itself. For example, in 2020, in response to the inquiry of the “Hraparak” news agency, the ministry stated that “515 citizens applied for military service and were drafted into the RA armed forces within the framework of the “I Am” program.

Thus, it is not clear whether the number of citizens applying for these two programs is a state secret or not.

This is not a new or an exceptional case for the Armenian state apparatus, particularly the Ministry of Defense. In March 2022, media.am sent a written request to the Ministry of Defense, asking to provide the number or percentage of female servicemen in the armed forces. Citing state secrets, the ministry refused to provide this information, but earlier provided the data to the Office of the Human Rights Defender for publication in their annual report.

The police also refused to provide information that was later published

In April 2022, we asked the police how many people have the right to carry weapons among civilians and how many of them used these weapons for illegal purposes.

The police refused to answer the first question, describing it as “top secret.” It did not answer the second question, justifying that such “accounting is not done” in the structure.

Media.am is not the only one and this does not console us

In October, “Fact Check Platform” also wrote about the “irresponsible behavior” of a number of departments and showed by its own example how state departments violate the principle of freedom of information. Other media also warned about this.