The Author Of The Cartoon Is Not “Charlie Hebdo”

On September 20, a caricature depicting the farewell ceremony of the Queen of Britain was spread on social networks, the author of which was supposedly the French magazine “Charlie Hebdo.” In the shared image, users found RA President Vahagn Khachaturyan taking a photo violating the funeral protocol. However, as it turned out later, the cartoon is not from the French satirical magazine, moreover, there is a whole fake series of special issues published in the name of the editorial office.

What were users writing?

The caricature being distributed was the cover of “Charlie Hebdo” magazine, which was a special issue and was released on September 19. Issues of the magazine are generally published every week, on Wednesdays. The archive of the published editions is available on the website, and the caricature that is being distributed is not among them, but it was very popular in the Armenian information field.

On the Facebook page of the political satirical website ArmComedy, the picture was published with the caption “Find the RA president on the cover of Charlie Hebdo.” Later, the publication was removed, and Narek Margaryan, one of the authors of the program, clarified, “As far as I understood, it was an anti-Ukrainian fake, so I am removing it.” 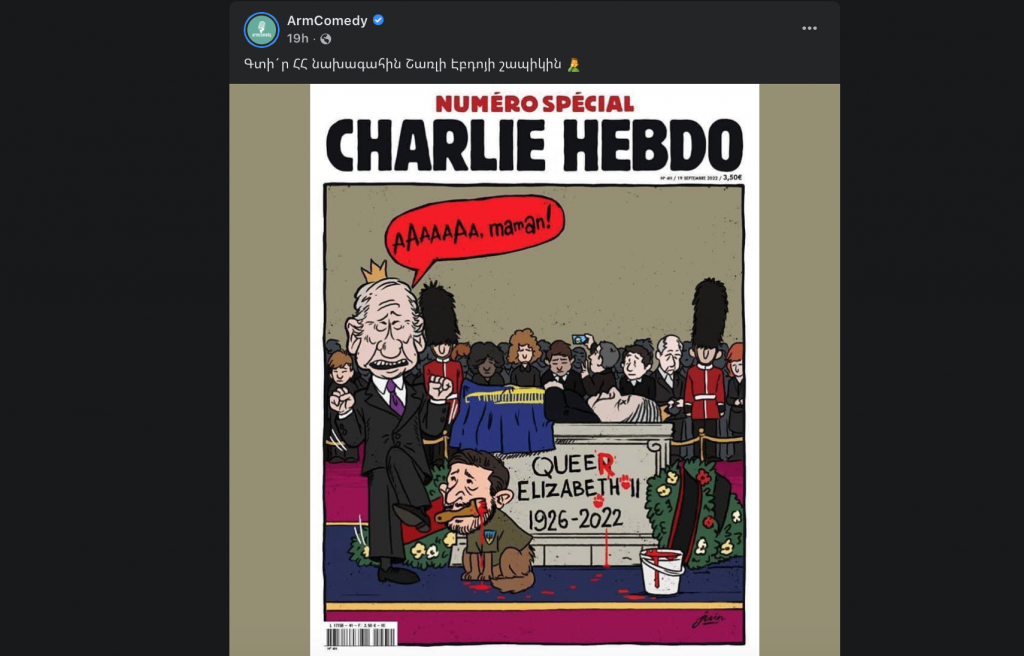 As of 10:00 on September 21, the post had collected more than 900 likes and had been shared 69 times. And a number of websites took this post outside of Facebook and shared it as news: mamul.am, artsakh.news, kentron.am, ipress.am, asekose.am.

As it is known, the President of Armenia Vahagn Khachaturyan was present at the farewell ceremony of the British Queen. He was photographed in violation of protocol, which became the occasion for scandalous coverage in the British yellow press. This topic was widely discussed in the Armenian social network domain, and appearing on the cover of a satirical magazine seemed very logical in this context.

There have been alerts on social networks that the caricature is not from “Charlie Hebdo,” moreover, it was spread by an Azerbaijani source.

Hours after the cartoon was shared, some Facebook users questioned the origin of the cartoon and, through their own investigation, assumed that it was spread in the field by Azerbaijani sources, particularly Azvision.az. It was this website that claimed with its publication that the French magazine mocked the RA president.

User Nora Grigoryan wrote that the source of the cartoon “is actually AZERBAIJAN (still)”. She also added that it was not the President of Armenia, but the Foreign Minister of Mexico who took a selfie and posted it on Twitter at the funeral of the British Queen. And the cartoon character was taking a selfie.

Later, user Karen Avetisyan, who searched the magazine’s social network pages and the Internet, addressed the same topic and did not find the cartoon. Moreover, at his request, his friend also looked for the special issue of “Charlie Hebdo” on September 19 in the Paris kiosk and did not find it.

Media.am contacted the French-Armenian journalist Vahe Ter-Minasyan, who sent us the cover of the latest issue of the magazine, in which the funeral cartoon is not depicted. 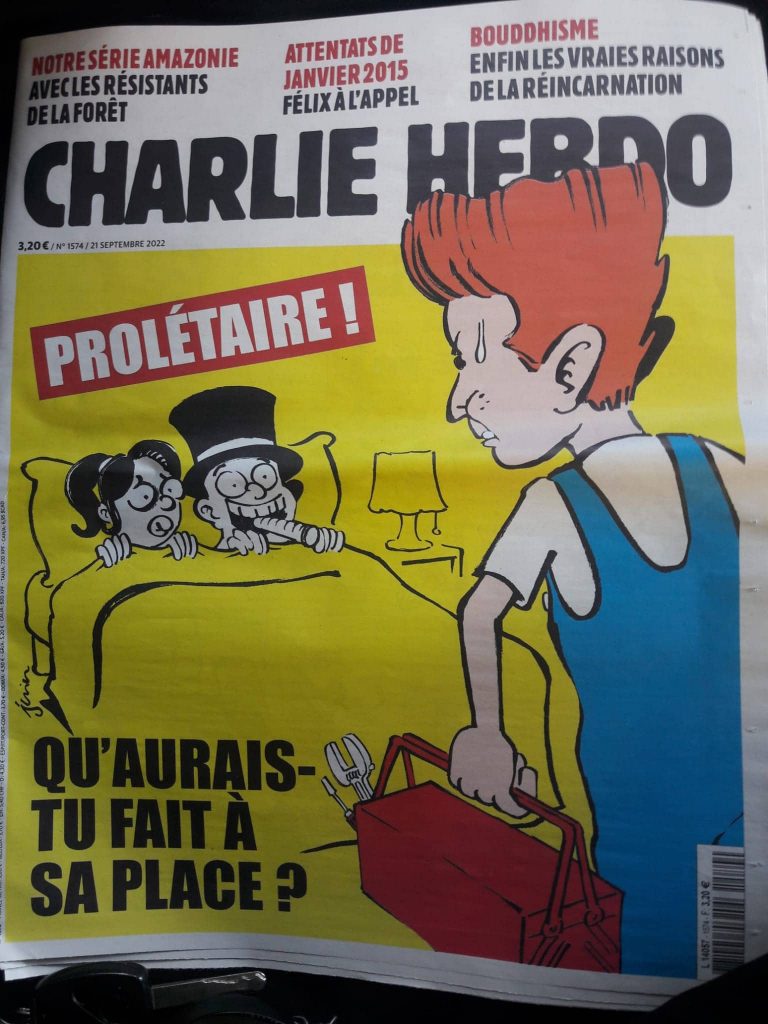 The cover of the September 21 issue of “Charlie Hebdo.” Photo by Vahe Ter-Minasyan

As a result of the reverse search for the cartoon, Media.am managed to find another special issue of the so-called “Charlie Hebdo,” in which the President of Ukraine, Volodymyr Zelensky, was depicted in the popular cartoon as a dog. 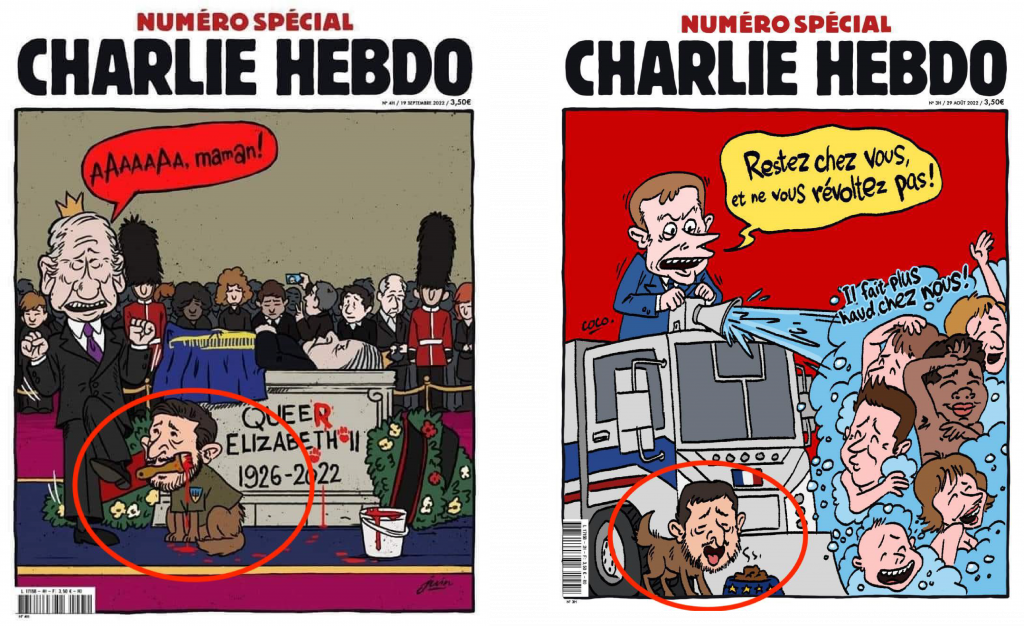 Continuing the search, we managed to find another fake magazine cover on Russian Telegram channels. 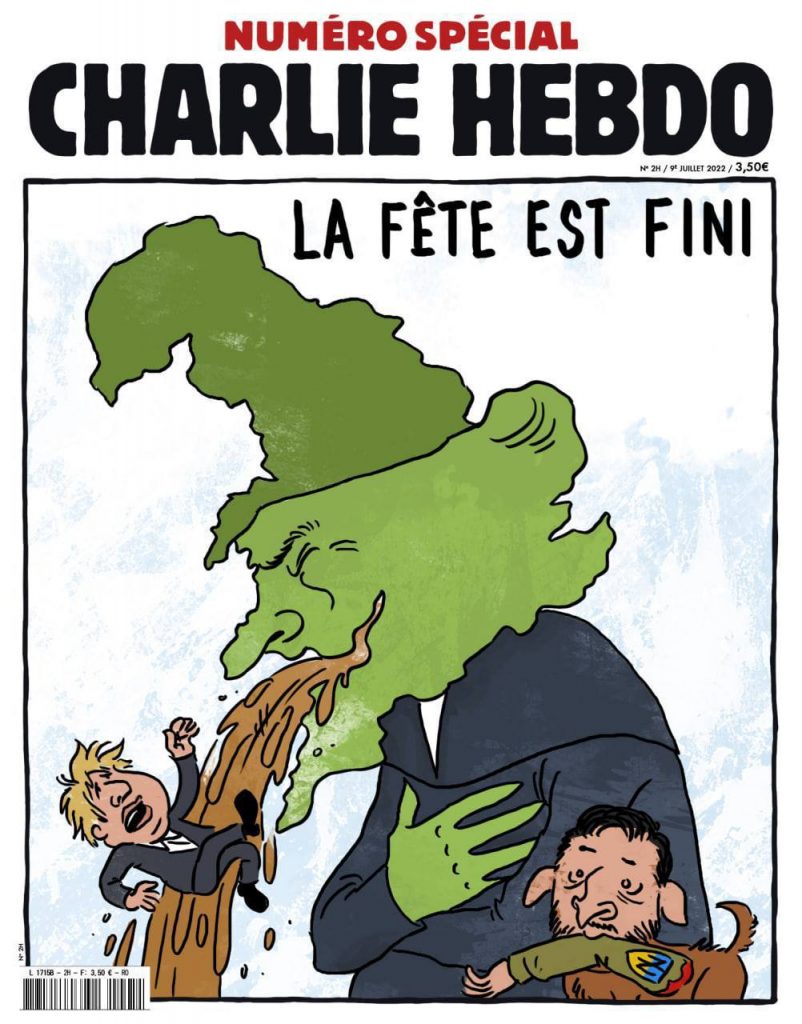 We also found out that earlier, in the summer of 2022, Ukrainian fact-checkers covered the special issue attributed to “Charlie Hebdo” in which President Zelensky was depicted as a dog. The fact-checkers could not find such an issue on the magazine’s website, nor did they find the author. Instead, they informed that it “is used by Russian propaganda to mock and devalue the partnership between Ukraine and other countries.

It turns out that a fake cover of the satirical magazine “Charlie Hebdo” was spread in the Armenian information field, in which the users saw the image of the RA president. It turns out that there is a whole series of fake magazine covers, the author of which is still unknown.