Why Is Meghri Not Gasified? 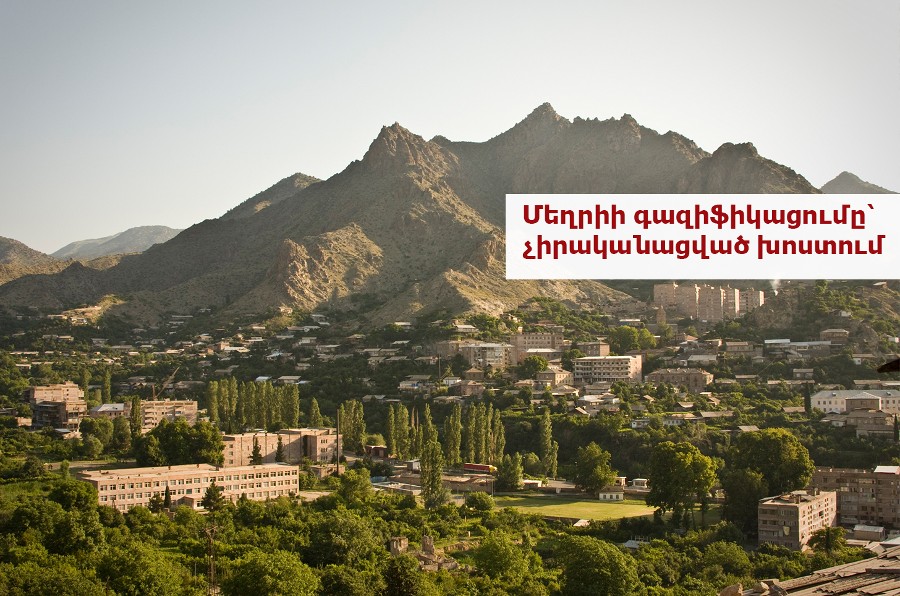 During the NA-Government question-answer session on May 25, deputy of the Civil Contract Party, Armen Khachatryan, inquired from the Minister of Territorial Administration and Infrastructure Gnel Sanosyan when the residents of Meghri will finally have natural gas. The issue has been touched upon for years, and promises have been made, but there has been no progress. In response, Minister Sanosyan said that in 2017, 90% of the city of Meghri was gasified as well as 10% of the city of Agarak, and that a network was laid, but it has not been connected and so far, the community has not fulfilled that obligation.

“Seeing that the problem remains, our government has implemented a program worth about 280 million AMD with the Territorial Development Fund. On October 21, the program was completed, and some work was done. If I’m not mistaken, tomorrow at the government session (if not tomorrow, next Thursday), we will hand over the gasification system to Gazprom through state property․․․ In short, there are several months’ worth of work to be done, but by autumn our compatriots in Meghri, Agarak, as well as the village of Lehvaz will have been added, and everyone will have gas.”

The Media.am fact-finding team decided to find out how long the population of Meghri has been deprived of blue fuel, what the reasons were, who promised, and failed, to solve the gas supply problem, and on what terms.

Meghri has never been gasified*

About 25 years after the construction of the Iran-Armenia gas pipeline, the residents of Meghri are still waiting for gasification. This community, according to Mayor Bagrat Zakaryan and locals, has never been gasified. At different times, the authorities have publicly made promises to introduce a new system, which have not been fulfilled so far.

The governments of Iran and Armenia, back in December 2011, signed a memorandum of understanding on providing assistance to Armenia.

Under the memorandum, the Iranian government provided a $2 million grant to ArmRosGazprom CJSC (now Gazprom Armenia) to build a gas supply network for the population in the towns of Meghri and Agarak in the Syunik region. The main goal of the project was to supply natural gas to apartments, which would reduce deforestation in the region.

In 2013, the Syunik regional administration told RFE/RL (Azatutyun) that construction of the pipeline should begin next year. In those days, the Ministry of Energy and Natural Resources assured that Iran offered gas for $400 per 1,000 cubic meters, while Russia provided it for $189. The implementation of the program, however, was interrupted due to the cessation of funding from Iran, and then resumed in late 2015.

Five years after the adoption of the memorandum, in December 2016, it was announced that the construction of the gas distribution network would be completed. A symbolic fire was lit in the cities and the gas supply was launched. The residents hurried to congratulate each other and talk about the dream come true. The media wrote that the city of Meghri and a part of Agarak have been completely gasified, and the communities will soon receive gas. The residents, however, did not receive gas.

In the winter of 2017, the government decided to transfer the gas supply network of the Meghri and Agarak communities to Gazprom Armenia for an indefinite period and with the right of gratuitous use. This meant that the supply of Iranian gas in Meghri and Agarak would be controlled by a Russian company, which owns the monopoly on gas supply in Armenia.

Unfulfilled promises from the new authorities as well

The problem of providing gas to the residents of Meghri and Agarak continued to hang in the air even during Nikol Pashinyan’s administration. During the years of the current government, promises and deadlines for gasification were made.

In 2019, for example, at the sitting of the NA Standing Committee on Regional and Eurasian Integration, the chairman of the committee Mikael Melkumyan announced that the Meghri community will have gas by the end of the year.

“We raised the issue during a question-and-answer session with the government, the RA Prime Minister registered it, and a few days later we learned that measurements are already being made on the spot. Let us state that as a result of the outgoing sitting of our commission, Meghri will have gas by the new year,” said Mikael Melkumyan.

In 2020, the government prepared a video with the caption “They will have gas in Meghri soon.” The journalist mentioned that the government had allocated about 289 million AMD from the reserve fund for the gasification of the enlarged community of Meghri. 10 thousand inhabitants and 3 dozen economic entities will have the opportunity to use blue fuel. Two years after this promise, the residents of Meghri still do not have gas.

* Changes have been made to this article. In the original version, it was written “The residents of Meghri have not had a gasified system for about 25 years.” However, there has never been a natural gas supply system in Meghri.