No Case Of The Monkeypox Virus Has Been Registered In Armenia: Mika Badalyan Fabricated

On May 7, the world began to actively talk about the monkeypox virus. The first case of infection was registered in Great Britain. The citizen had just returned from Nigeria, where they were allegedly infected.

Monkeypox is a unique virus that is transmitted from animals to humans but is not easily spread between humans. It has been recorded in remote areas of Central and West Africa. It is transmitted to humans mainly by wild animals. This virus is similar to the natural smallpox virus. Most often, people recover from the disease within a few weeks. However, complications are also possible. The incubation period of the disease lasts 5-21 days, the symptoms are fever, headache, back and muscle pain, shivering, and general weakness. After a fever, a rash may appear on the face and then on other parts of the body. More than 80 cases of monkeypox have been reported in at least 12 countries, 50 of which are under investigation.

On May 21, the leader of the “Liberation” movement, blogger Mika Badalyan wrote in a Telegram channel that “the Russian Ministry of Health reported that the source of the monkeypox virus was the western bio-laboratories operating in Armenia”. The blogger also reported that “350 cases of infection have been registered in Armenia in the last 3 days”. Although Mika Badalyan had deleted the post after some time, it was saved in the TGStat search engine. 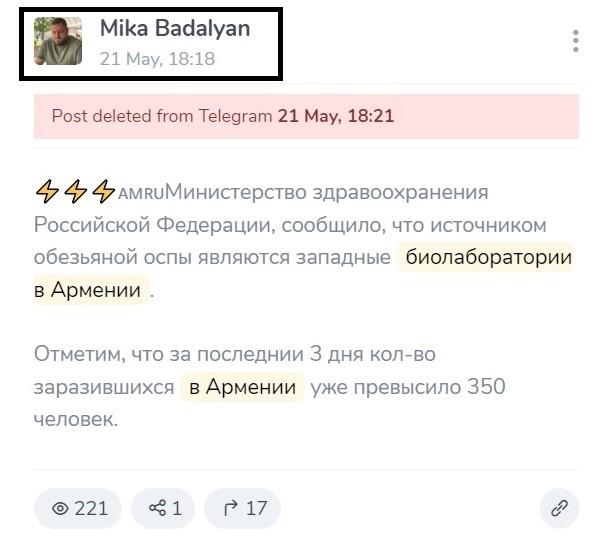 The post managed to spread widely on social networks. The Azerbaijani Telegram channel Без Масок ЧИВ also joined in spreading the information, media.am reported on other false and intimidating information published by this channel in the past (link 1, link 2). The information was republished on Telegram by many other channels (1, 2, 3, 4, 5).

No case of the monkeypox virus has been found in Armenia. Today, on May 22, in a conversation with media.am, Health Spokeswoman Hripsime Khachatryan officially announced this. Then she wrote the same thing on her Facebook page.

As for the statement of the Ministry of Health of the Russian Federation that the source of the spread of the virus is the western bio laboratories operating in Armenia, this information also does not correspond to reality. The main healthcare structure of Russia did not make such a statement on either its official page or in other media.

On May 18, Sputnik Armenia wrote that “Russia still has questions regarding the information received about Armenia’s cooperation in the biological field with the United States and its allies, including military departments.” Quoting the words of the Russian Ambassador to Armenia Sergey Kopirkin, the website wrote that the presence of structures participating in biological projects in Ukraine in Armenia deserves a detailed analysis.

“The embassy notes that the United States and its allies do not explain what they are doing in Armenia, in the immediate vicinity of the Russian border. This factor, of course, the embassy takes into account in the context of ensuring Russia’s biological security,” Sputnik wrote. There is no reference in this information to the disease called monkeypox.

Mika Badalyan was arrested in “Freedom” Square on April 22. According to a statement issued by the RA Investigative Committee, on April 11, he falsely reported on his Telegram page that terrorist acts may take place in the territory of Armenia in order to create an emergency situation. Badalyan was charged with Article 259 of the RA Criminal Code. A motion was filed against him as a measure of restraint. A few days later, on April 24, he was released.

Thus, Mika Badalyan’s assertions that the RF Ministry of Health reported that the source of the spread of the virus is the bio laboratories in Armenia and that 350 cases have been registered in our country are false.