Contradictory Statements About The Tragic Accident 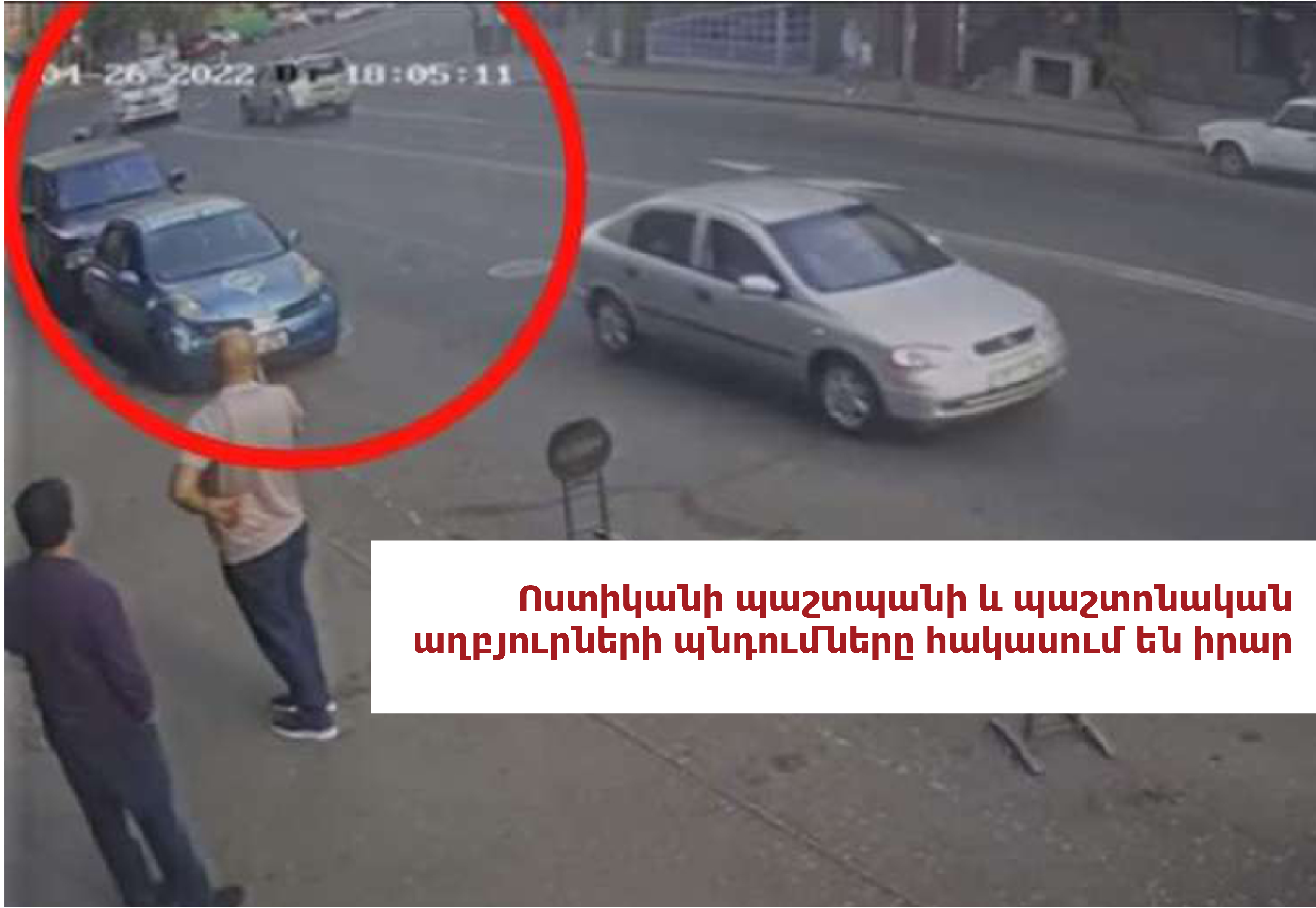 On April 26, a traffic police car that was accompanying the Prime Minister’s motorcade ran over a pregnant woman, Sona Mnatsakanyan, at the intersection of Paronyan and Leo streets in Yerevan. Two days after the tragic accident, new theories are being put forward in connection with the incident. These are often contradictory or excluding statements.

The RA Police were the first to officially respond to the incident, noting that “at 18:24, the operative control center received a report that an SUV had run over a woman near the intersection of Leo-Paronyan streets.” According to the police, the woman was run over by a “Toyota” car of the Traffic Police, which was in service.

Later, the Investigative Committee reported that the commander of the officer platoon accompanying the “Traffic Police” service had been arrested. A criminal case has been initiated against the law enforcement agency under Article 242, Part 2 and Article 244, Part 1 of the RA Criminal Code. This means that the driver is accused of violating the traffic rules, causing death by negligence, and leaving the scene of the accident (although no charges have been filed yet).

According to the Investigative Committee, the collision took place around 18:05. The driver left the scene of the accident after the accident, but returned to the scene at 20:05 and took part in the investigation.

A day later, on April 27, Taron Chakhoyan, Deputy Chief of Staff of the Prime Minister, wrote on Facebook that the traffic police did not stop to help the woman, because if the battalion’s car stopped, the whole column would stop, blocking all traffic on the street. According to him, it would cause additional traffic jams in the adjacent streets and would hinder the work of the ambulance.

The statements of the Investigative Committee and Taron Chakhoyan, however, are contradicted by the statement of Ruben Baloyan, lawyer of the arrested commander of the officer battalion accompanying the Prime Minister’s motorcade, Aram Navasardyan. In a conversation with Hetq, Baloyan said that the policeman did not leave the scene, stopped after some 30-40 meters, and returned to the scene on foot, where an ambulance arrived very quickly. According to him, it was only after the woman was quickly taken to an ambulance that the policeman left the scene and took his car to the police.

If in the case of stopping one of the battalion vehicles the whole column had to stop, it is not clear how only the commander’s vehicle stopped and the Prime Minister, without being informed about the details, continued on their way. The Defender’s assertion also contradicts the statement of the Investigative Committee that the driver left the scene and returned about two hours later, at 20:05.

In none of the videos spread on the Internet did Media.am manage to capture either the police Toyota Prado car or the commander in uniform approaching Sona Mnatsakanyan Aram Navasardyan (1 2 3). Of course, this does not mean that the policeman had not stopped, but the facts confirming this assertion have not been published yet.

It is rumored that the Prime Minister’s convoy has no right to stop. Aside from Taron Chakhoyan, CC deputy Hovik Aghazaryan also spoke on this topic. According to him, despite not knowing the details, he thinks that in such a case one should not stop. “It is conditioned by the security regulation that you cannot stop, probably, I do not know.”

This field is regulated by the Law on Ensuring the Security of Persons Subject to Special State Protection and Special Legal Acts. The law does not define the details of the motorcade accompanying the Prime Minister, they are separate working documents. Media.am asked the NSS to provide them.

In the law, however, we read that the State Security Service, which is supposed to protect the Prime Minister, may, if necessary, take measures to temporarily restrict the movement of vehicles and pedestrians. The Service also has the right to take special measures, which can be exercised:

If we consider the refusal of the motorcade to stop as a special measure, it could be justified if the protected object, in this case, the Prime Minister, was in danger. However, none of the clarifications mentioned the threat, moreover, the Prime Minister was in a hurry to the National Assembly at that time to participate in the sitting of the CC, as the pro-government MP Maria Karapetyan mentioned in an interview.