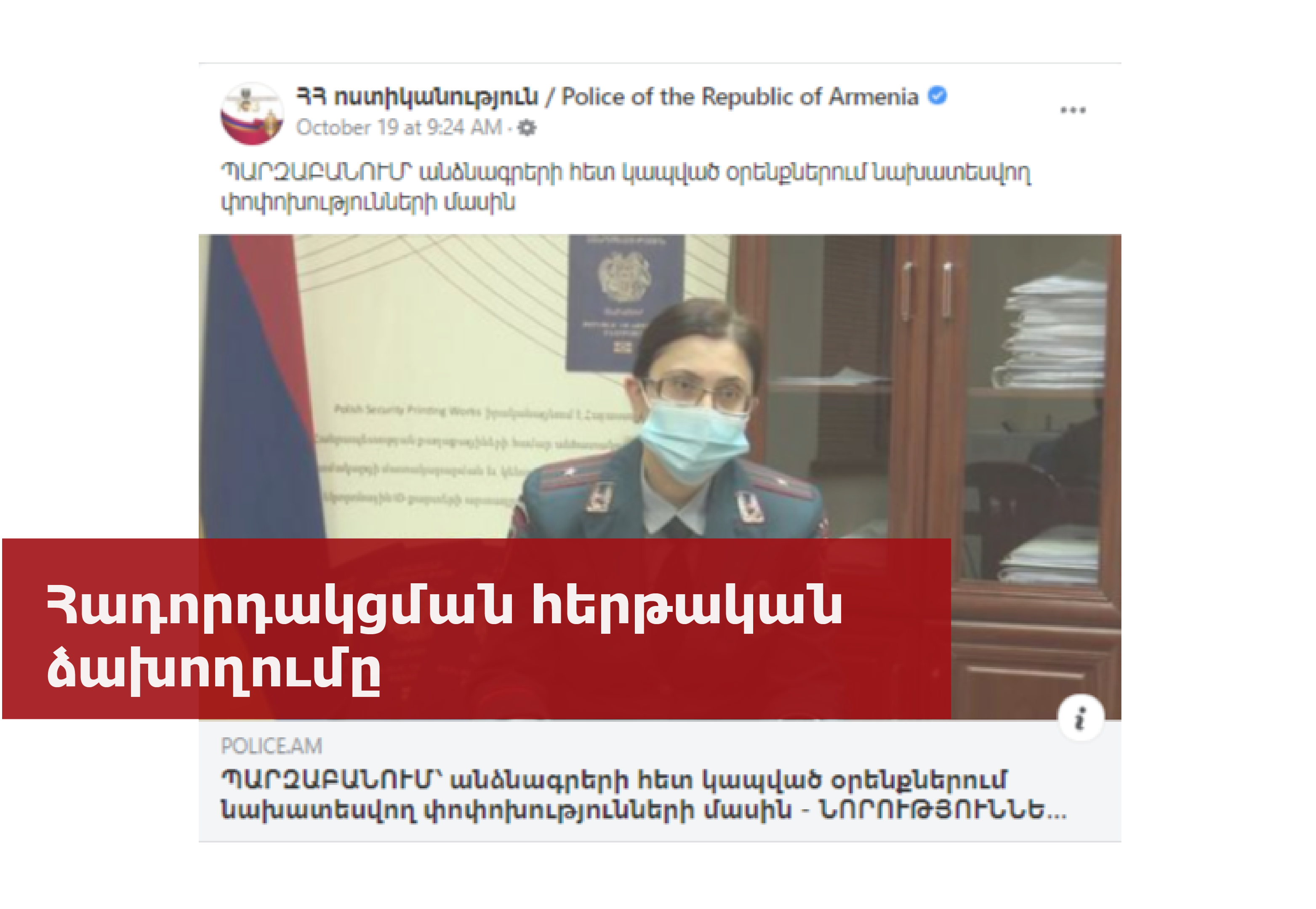 The current authorities and state bodies have a problem with communicating with the public. Often, their reaction is reactive․ An event takes place, regulations and bills are put into circulation without providing sufficient information and clarification. This is followed by information confusion and flows of misinformation, which they try to stop with a belated explanation. In the current situation, they see everyone’s faults, but not the problem of their own weak communication tactics.

Recently, the topic of the package of amendments proposed by the Police on the reduction of the validity of RA passports became the subject of discussions on social networks and in the press. The structure made clarifications only on the 4th day, but the public had questions and a heated discussion had taken place before that. Media.am has summarized several examples of these and other communication failures.

In mid-October, social networks and the press were trying to understand what package of amendments the RA Police had developed. According to the rumors, the structure proposed to reduce the term of passports from 10 to 2 years. Some also corrected that it was about extending the passports of those living outside Armenia.

In fact, the Police have developed two packages of changes. On October 16, they were posted on the website e-draft.am. The draft legal acts and their substantiations are published here. A public discussion is taking place on the same platform. 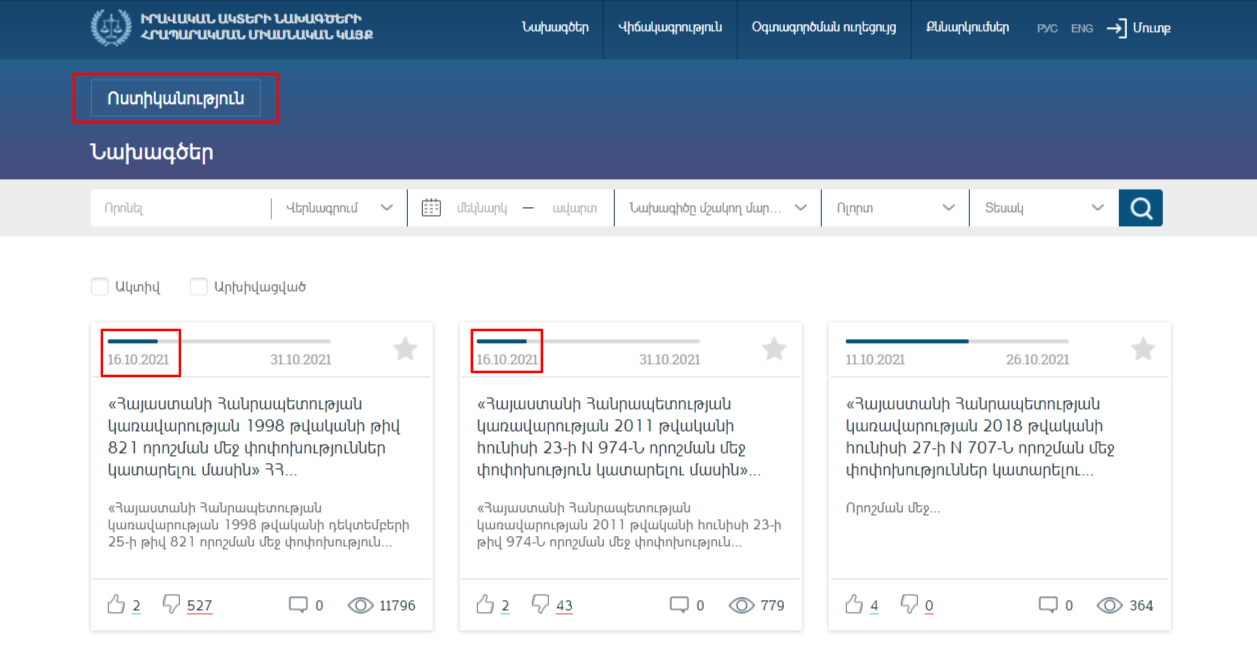 In the first of the packages, the Police propose to reduce the validity of the RA citizen’s passport in foreign countries from 10 to 2 years. The substantiation of the project is conditioned by the changes of the other proposed package.

According to the second draft, the structure proposes to set a maximum term of 2 years for the RA citizen’s passport instead of the previous 10. As substantiation of the proposal, it is mentioned, “thus, the decision of the State and Legal Ministerial Committee dated 29.09.21 will be implemented. The instructions are given at the sitting.” The problem is that the mentioned instruction is an unpublished document.

Although the Armenian government gave a positive conclusion to the project, it received a great negative response on e-draft.am.

This proposal received a heated and negative response, as the motive for such a change was incomprehensible. In addition, negative consequences were predicted: new lines at the passport offices, new financial burden and the problem of visas for travel.

The police issued an explanation a few days later

Only on the 4th day of these discussions did the Police share an explanation. It explained that the package of changes refers only to the old passport models and that biometric passports will continue to be issued for a period of 10 years.

The purpose of this is to ensure the compliance of RA passports with international standards and security systems. Work is being done in this direction․ A competition for the design of biometric passports and identification cards has already been announced and a commission has been set up.

As for the travel restriction, the representative of the Police clarified that the term of the received visas has nothing to do with the term of the passport. If the entry permit is longer than the passport is valid, then the person can enter the country. The visa can also be transferred to the new passport.

It turns out that the proposal to change the validity of passports is related to the introduction of a new system and it will not cause a visa problem.

Irina Mkrtchyan, Head of the Legal Department of the Passport and Visa Department, in her explanation of the discussion, considered “speculations […] that cause unfounded anxiety to people” (in the video starting at  4:19 minutes). However, in the current situation, there is an objective circumstance of bad communication between the Police. Due to the late explanation of such a change for incomprehensible reasons, the public had questions and a wave of protests.

The problem of communication between state structures is not new

This is not the only case when a state structure adopts a decision, order, or proposes a change, which raises questions with the public and is clarified only after the spread of misinformation and big discussions.

One such recent example is the draft amendments to the Labor Code and the Law on Public Service proposed by the Ministry of Labor and Social Affairs. The public had questions as to why some officials were exceptions to the dismissal rule if they did not submit a vaccination certificate or PCR test. On October 15, the Ministry of Justice issued a clarification.

The Ministry commented that these are the officials whose positions are elected or appointed as a result of constitutional processes or the grounds for termination of powers are provided by the Constitution or do not have a superior body or official.

The Human Rights Defender of Armenia also assessed the poor communication. In May 2020, the National Assembly ratified the Council of Europe Lanzarote Convention on the Protection of Children against Sexual Violence. Prior to that and the ratification, the Convention became a subject of misinformation. Various experts claimed that “this convention has to do with the sex industry” or is in the interests of the LGBT community.

Although the ruling wing, from the deputies to the Prime Minister, clarified that the convention aims to protect children from sexual violence, it was not enough. This was stated by the Ombudsman of Armenia Arman Tatoyan from the NA tribune. “This convention is one of the best examples that the Government has not done enough awareness-raising work, and as a result of not doing so, it is clear that this vacuum will be filled with false information and misinformation,” Arman Tatoyan stated.