The Pleasure Of Chocolate Is Not That Healthy 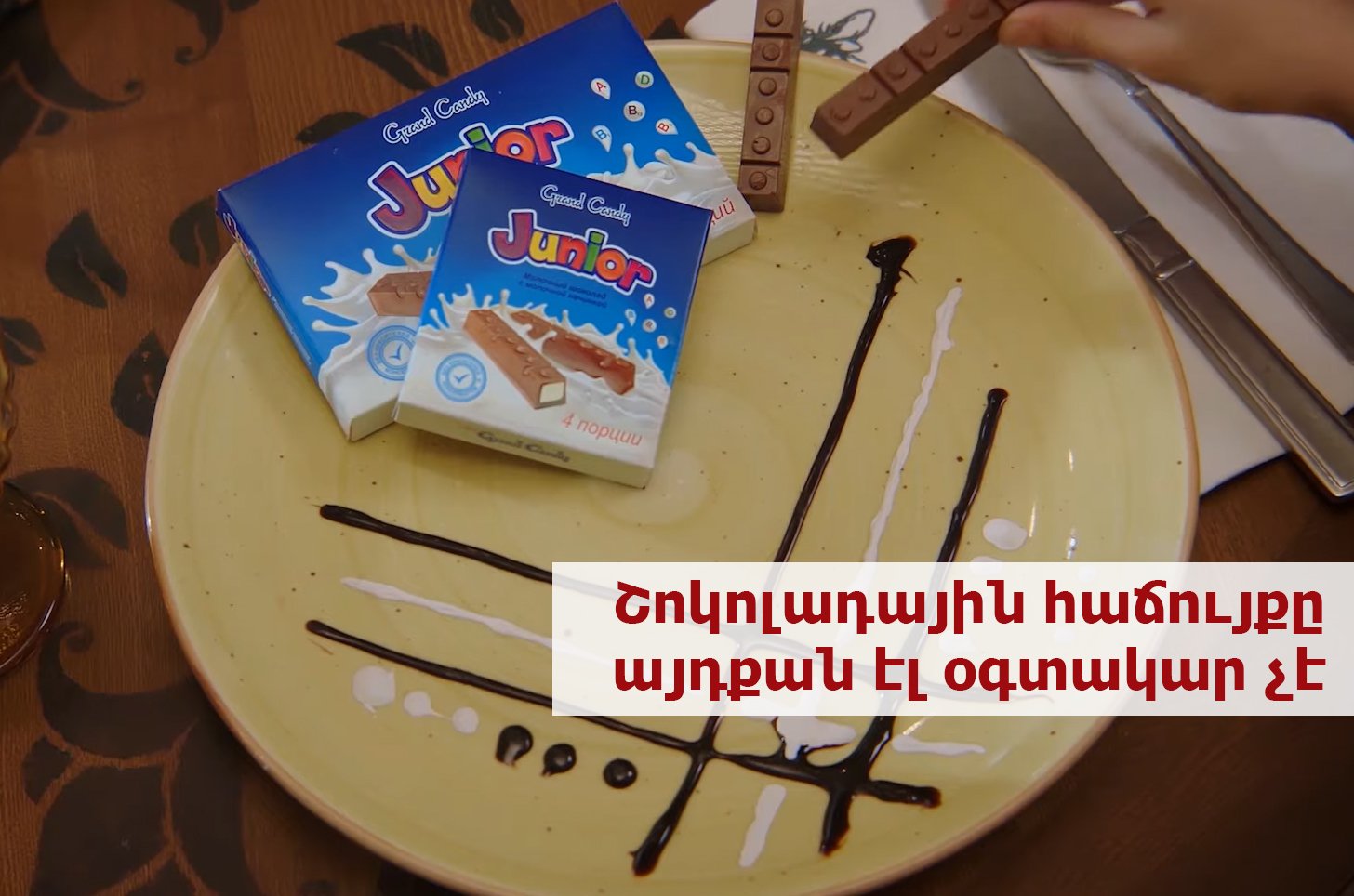 The largest producer of candies in Armenia, “Grand Candy,” presented a new product in the fall, Junior milk chocolate.

The public loved the ad of the new candies: It was viewed about 190 thousand times on Facebook in one week alone. However, this ad contained exaggerated or erroneous claims about the benefits of chocolate candies, giving the impression that such food could be considered a healthy snack for children.

❌ “The pleasure of chocolate is also very healthy.”

The heroine of the video, biting from Junior milk chocolate, said, “It is good when the pleasure of chocolate is also very healthy.”

This is a problematic assertion. Candies are not considered part of a healthy diet. Of course, dark chocolate with a high cocoa content offers beneficial substances for the body (link 1, link 2). But the candy in the “Grand Candy” advertisement is a mixture of milk chocolate and additives. Like other similar candies, it contains a large amount of sugar, which is quickly digested but is not good for the body. Almost half of the content of Junior candy is added sugar: As stated on the candy box, every 100 grams of it contains more than 48 grams of sugar.

Natural sugar, which is contained in fruits, for example, is not harmful to the body. The reason is that in addition to sugar, fruits also contain important dietary fiber and various useful vitamins.

Manufacturers of candies, juices, and other processed sweets add sugar, making its content too high, while fiber and other nutrients are low in such products.

Chocolate candies also contain too many calories and can contribute to weight gain. Thus, 100 grams of Junior candies contain about 570 kcal. The Ministry of Health of Armenia advises children aged 3-6 to consume up to 1,800 kcal per day. Almost the same, up to 1,600-1,800 kcal (depending on the level of activity) is recommended for children in this age group by the US Food and Drug Administration.

That is, from only 100 grams of milk chocolate, the child receives more than a quarter of the necessary daily amount of calories.

✅ “Milk chocolate has vitamins and calcium, which is needed for building a strong immune system.”

Milk chocolate really does contain quite a lot of calcium. The US Department of Agriculture states that milk chocolate contains about 190 milligrams of calcium, as well as some vitamins, such as vitamins A and K.

As a rule, food containing dairy products contains a lot of calcium. However, in the case of milk chocolate, not only calcium is high, but also calories and sugar, which makes it less healthy than ordinary dairy products – milk, cottage cheese, etc.

One of the heroes of the video, continuing to list the beneficial characteristics, said, “I definitely remember that it is also good for memory.”

According to Harvard Health Publishing (link 1, link 2), some scientific studies show that the flavonols in cocoa and dark chocolate contribute to better brain function, including improved memory. But this finding relates only to dark chocolate, in which the content of flavonol is high.

Milk chocolate, which Junior candies contain, does not have the same beneficial properties.

Chocolate is widely reported to increase endorphins in the body and thus elevate mood. Not all scientists agree with this statement. However, the opposite opinion is more common. An article in the British Journal of Clinical Pharmacology, for example, states that chocolate really does stimulate the release of endorphins in the body.