Established And Failed Reforms In The Armed Forces 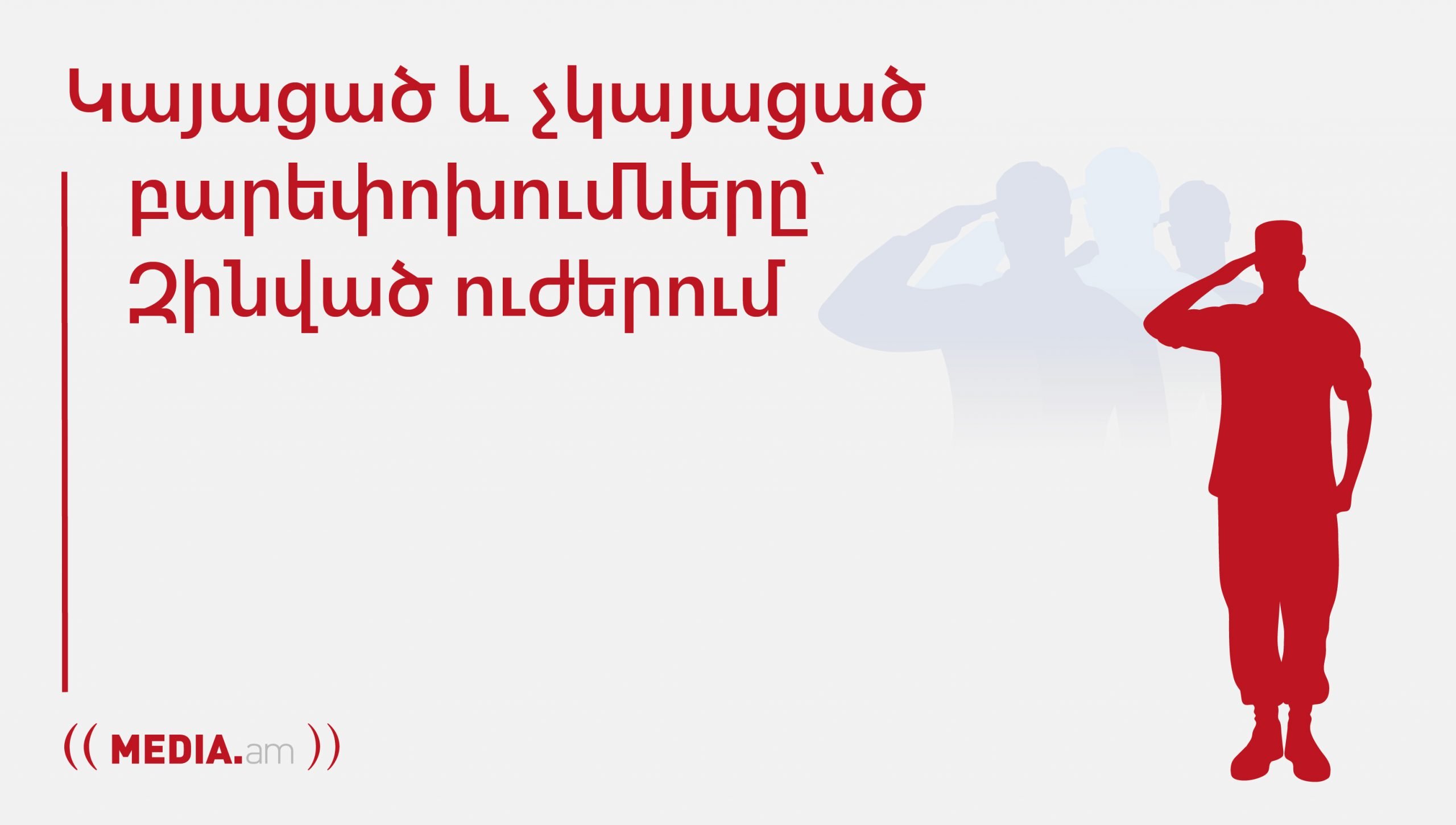 Days after the 44-day war, the Armenian authorities announced the need to modernize the armed forces. While announcing the 6-month program of reforms, Nikol Pashinyan promised to develop a report on the implementation of the road map in June 2021. More than a month has passed since the deadline, but no report has been submitted.

The current and former authorities used various mechanisms to carry out reforms in the Armed Forces, to make the army more accountable and transparent. Despite those efforts, Pashinyan, later talking about the army, had to admit, “We were under the impression that there is an established institution, it turns out that even that does not exist.”

Let’s try to understand what reform programs have been announced in the Armed Forces, to what extent they have been implemented, and what the press reaction has been to those processes.

The number of casualties is an official secret

Until 2010, it was difficult to get an answer to any kind of inquiry from the Ministry of Defense, especially when it came to the number, names and addresses of killed servicemen. The Ministry of Defense did not provide the requested information referring to it as an official secret. The wagon moved off the tracks 2011-2012.

The Vanadzor office of the Helsinki Citizens’ Assembly filed an application with the Constitutional Court in 2011 to declare some articles of the law on state and official secrecy unconstitutional. The court partially upheld the application: The provision of the seventh part of Article 12 of the law was declared invalid. After this decision, the Prosecutor’s Office and the Ministry of Defense started providing information about the killed servicemen. Moreover, a tradition was formed to publish the final number of the dead.

The problem, however, is that official sources and civil society data often differ. Tert.am, for example, wrote that the Ministry of Defense and the Defense Army did not report the death of 4 servicemen in 2019. To check this information, the news outlet had applied to the ministry with a question. The Ministry of Defense responded that those 4 deaths were in circumstances unrelated to their service: 2 – due to illness, 2 – to a car accident. Former Minister Davit Tonoyan also denied the rumors of hiding the deaths, without giving a clear explanation as to why the deaths of 4 servicemen were not announced.

The final data published by the civil society and the prosecutor’s office differed. Adviser to the Prosecutor General Gor Abrahamyan, for example, announced the death of 49 servicemen in 2019 in the RA Armed Forces and the Defense Army of the Republic of Artsakh. However, according to the HCA Vanadzor office, the total number of victims is 50. One case of death was registered from a car accident, which, in fact, the other structures did not register. 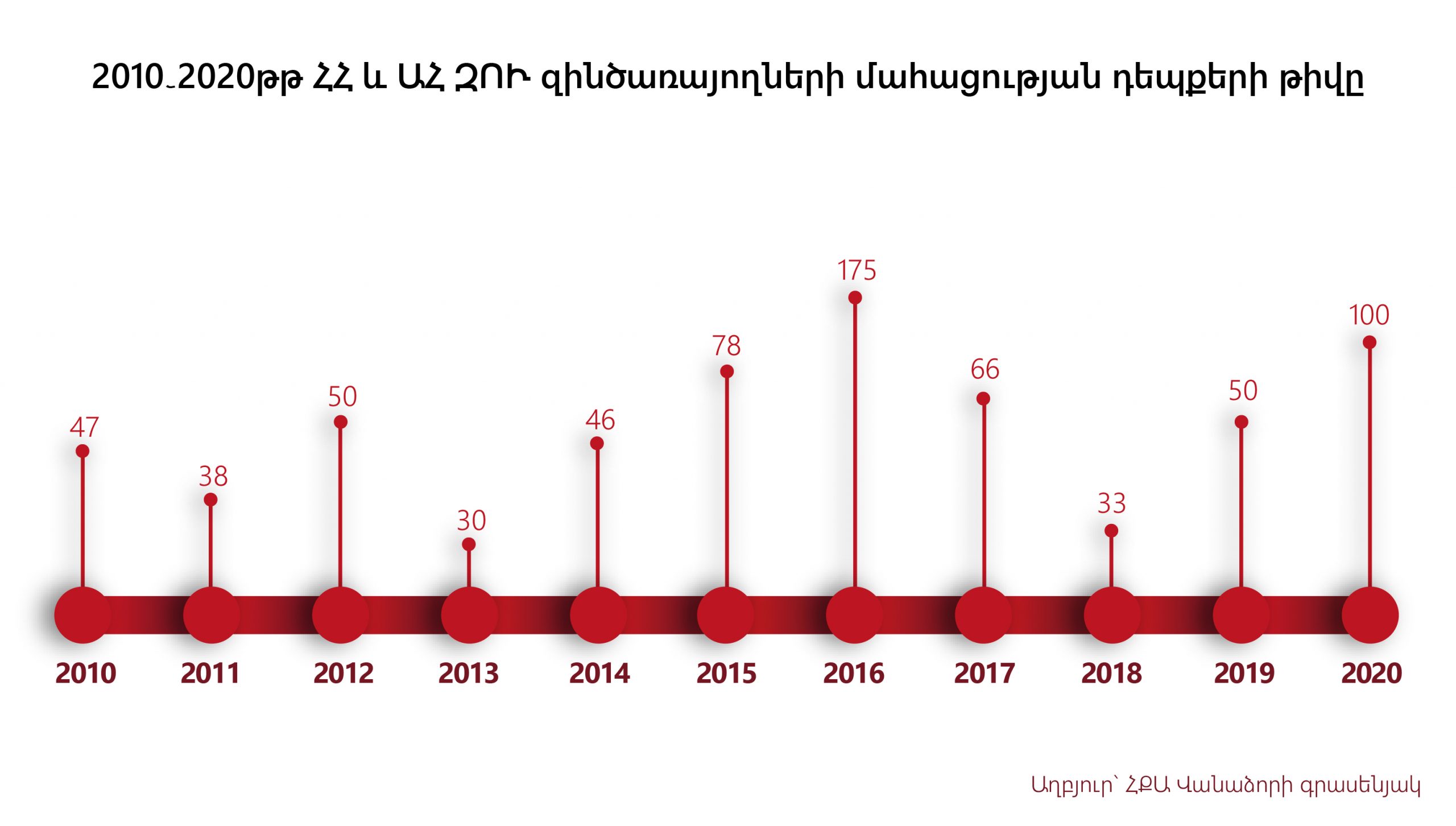 Thus, according to the HCA Vanadzor office, in 2010-2020, 743 servicemen were killed during the year. The victims of the 44-day war are not included here, as that data is not complete yet.

The report of the “Transparency International Anti-Corruption Center” states that according to the survey conducted in 2013, 47% of RA citizens considered the military sphere corrupt. Seyran Ohanyan headed the Armed Forces during this period. It was also during his time that in April 2013 parliamentary hearings were organized with the participation of civil society. This was one of the exceptional cases when the Ministry of Defense entered into a direct dialogue with civil society.

One of the important initiatives of this stage was the RA Law on the Disciplinary Code of the RA Armed Forces adopted in 2012. It assumed that if a soldier was injured as a result of a violation of the regulations, the responsibility was also extended to the officers. 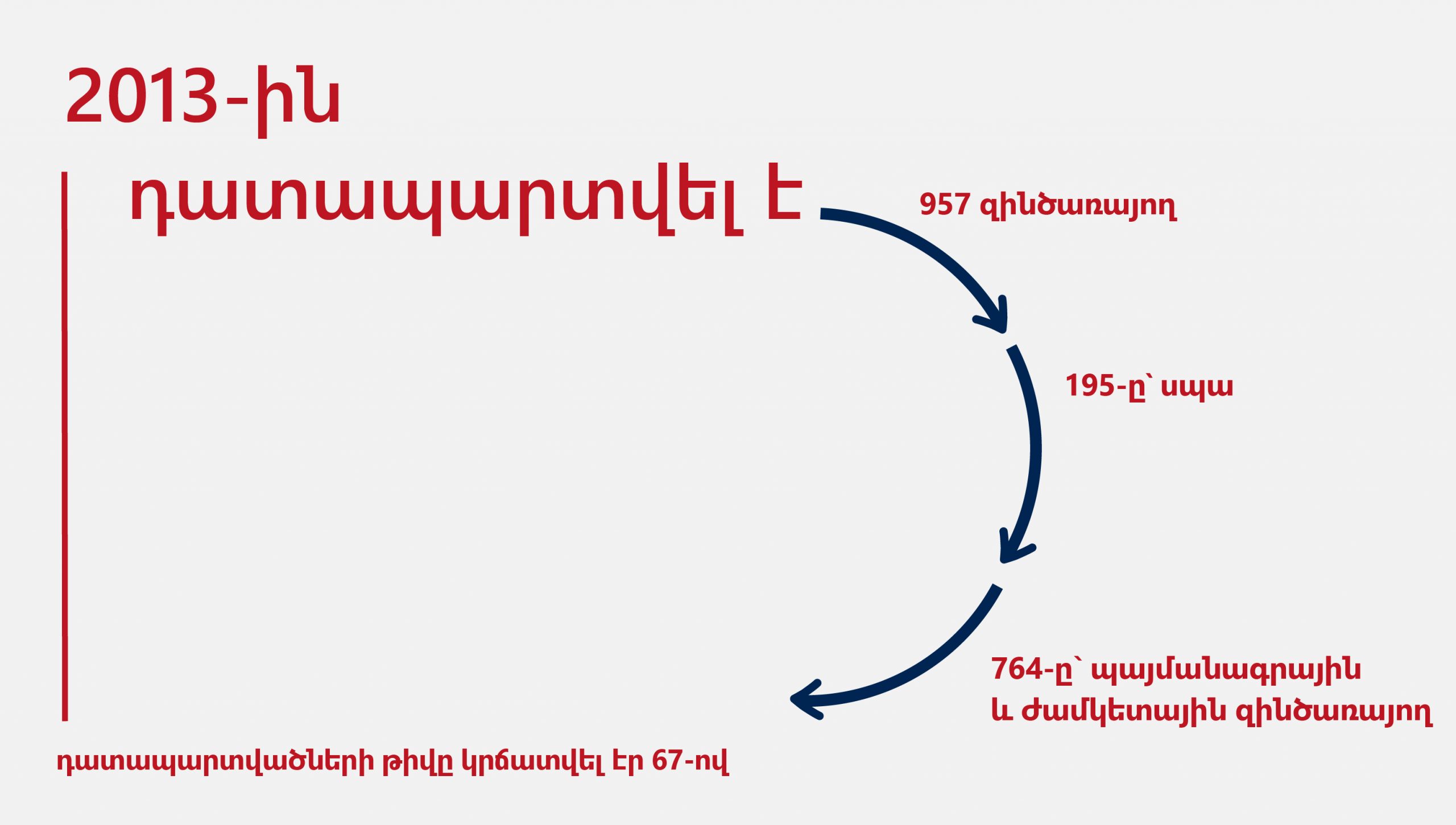 In any case, the death toll of the soldiers did not change much. On the contrary, after 2013, the number of deaths increased consistently until 2017. And according to the survey results published by the HCA Vanadzor office in 2013, many of the demobilized people consider the lack of professional qualities of the officers to be the main problem of the army.

In 2013, another important decision came into force: By the order of the Minister of Defense, the principle of choosing the place of military service by lot was introduced. This, in fact, should have reduced the risks of corruption and leveled the deployment of soldiers on a fair basis. However, the report of the Human Rights Defender of the same year states that the procedure for selecting a place by lot was introduced with shortcomings. Its principles were not available to the public, and it is not clear how the rights of conscripts with privileges were secured in the event of such a draw. Despite the omissions, this was an important step on the way to making the army more transparent.

If you come, you will be pardoned

During the government session on April 8, 2021, Nikol Pashinyan announced that there would be deep and substantive reforms in the army. On the same day, a bill was approved to declare pardon for persons who had avoided military service and had reached the age of 27. Thus, 5,131 people who escaped from military service and 124 convicts can benefit from the pardon.

The law on citizens who have not served in the military has been amended 12 times since its adoption (2003) until 2019. The validity of this law has been periodically extended. A person who previously avoided conscription could pay a state fee, be released from criminal prosecution and enter Armenia without hindrance. The previous parliamentary majority, the Republican Party, raised the rate in 2017, assuring that this would be the last change. 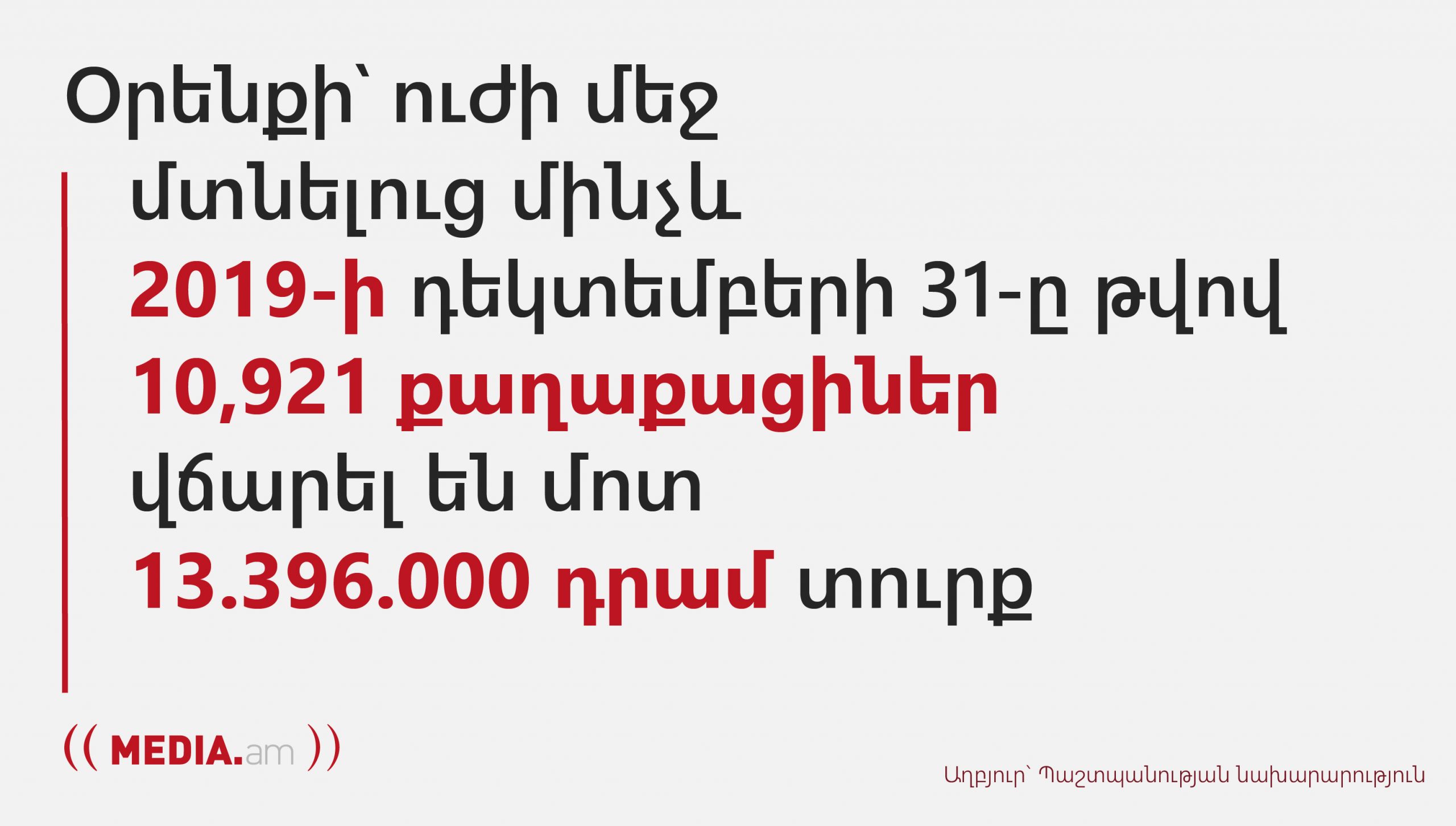 The issue has not been finally resolved yet. In 2020, it was decided not to extend the term of the law: Those who escaped from the service in January would be prosecuted, even the state fine would not save them.

Before the 44-day war, all the proposals to settle the issue were rejected in the National Assembly. Moreover, many of them were described as anti-Armenian in the press and social networks.

For example, in November 2019, the deputy of the NA “My Step” faction Hayk Sargsyan put into circulation the draft law “On the Procedure of Accelerated Military Service.” The deputy offered to serve in the army for only 1 month in case of paying 10 million AMD to the state budget. According to him, the problem of emigrating for not serving and not returning to the country after 27 could have been solved in this way. The proposal received a strong response both within the faction and in the Ministry of Defense, as well as in the media field. Hetq called the project unconstitutional.

“What Hayk Sargsyan could not do, Mkhitar Hayrapetyan and Arman Babajanyan are allowed.” This was the title of the Lurer.com article, which referred to the legislative initiative of three other deputies, Mkhitar Hayrapetyan, Arman Babajanyan and Andranik Kocharyan, to settle the same issue. They proposed releasing a person who avoided conscription before the age of 27 if he voluntarily presented himself at the military commissariat. If he was already 27 years old, the prosecution against him would have been stopped in the case of appropriate payment.

None of the mentioned initiatives was implemented. Instead, a step was taken after the war, a pardon was announced for those who avoided service, which will last until December 31 of this year.

Do we need an army?

During the campaign for the 2021 snap elections, candidate Nikol Pashinyan said in his speech that there is an idea to reduce the term of service. “․․․There is an idea that there should be a 3-month service every 5 years so that the youth have the minimum combat skills.”

168.am, referring to Pashinyan’s words, conducted a poll among the citizens to find out whether Armenia needs a regular army.

The wording of the question gives the impression that Pashinyan offered to give up the army altogether. Meanwhile, his word referred only to conscripts.

On June 7, Pashinyan brought to the agenda the issue of a transition to a professional army, further clarifying what the alternative to term service would be. The same narrative was advanced in further interviews with MP Andranik Kocharyan. “We will have a professional army with a reduced number,” he said. It is interesting that once Deputy Minister David Tonoyan mentioned in an interview that in the conditions of unresolved conflict we can not afford to enter full contract military service.

The first major initiative after the appointment of Vigen Sargsyan as Minister of Defense (2016) was the establishment of the Soldiers’ Insurance Fund (“1000 AMD” fund). It was one of the components of the “nation-army” concept. The fund is intended to provide compensation to the families of servicemen and volunteers killed or disabled during hostilities. The number of main beneficiaries of the fund is 4,255. As of February 2021, they were given compensation of 14 billion AMD.

In 2016, 6 political forces were represented in the Armenian parliament: RPA, PAP, ARF, ANC, Orinats Yerkir and Heritage. The opposition was in favor of the idea, but did not trust the government and criticized the bill. Zaruhi Postanjyan, for example, considered the initiative of the Ministry of Defense to “enter the pocket” of a citizen, and Levon Zurabyan as an attempt to oppress the people. Nikol Pashinyan, who was from the ANC but operated independently of the faction, was in favor of the initiative.

It is interesting that Nikol Pashinyan was also accused of criticizing the institution of 1000 AMD, despite having voted for the project. 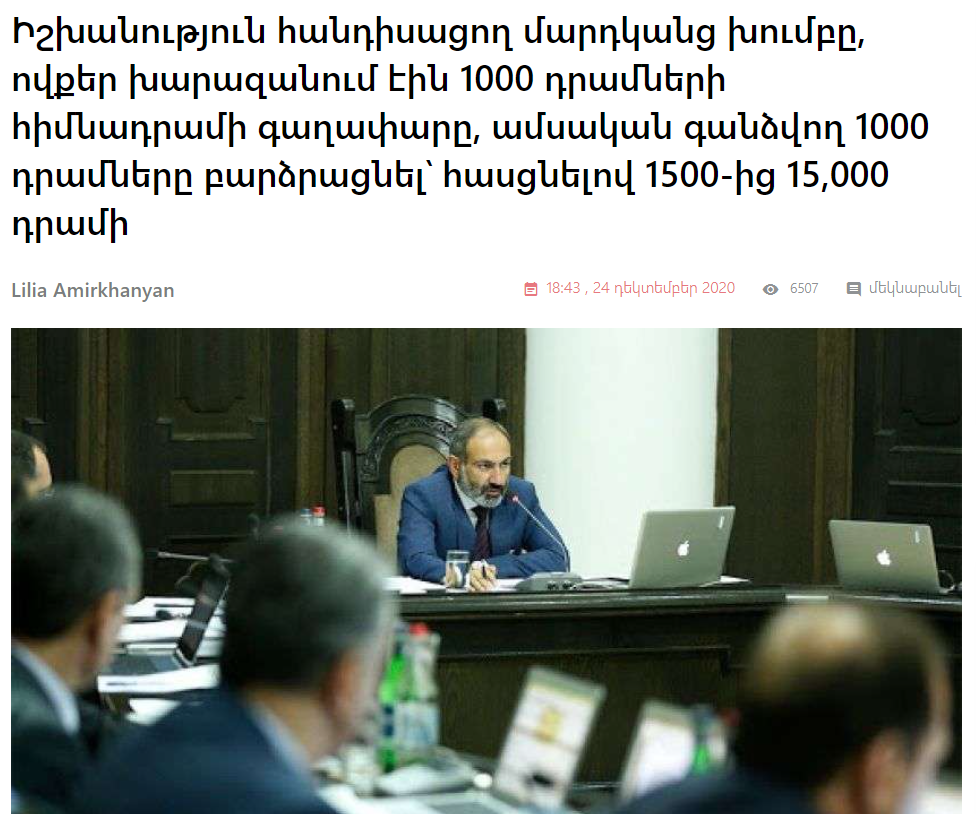 Former board member Mesrop Manukyan has been actively criticizing the foundation’s activities in recent years. On January 15 of this year, he wrote that from now on the fund will have administrative expenses, then announced that “the backpackers have found out how to steal 600 million AMD from the families of the killed servicemen.” The post was reproduced by Yerkir.am, Tert.am, Panorama.am and Yerevan Today.

Thus, reform programs in the Armed Forces in practice often did not work. There have been public discussions, speeches, advertisements about the reforms, but the statistics have shown that the vicious habits, corruption and murders in the army have not changed much.

Sources and methods used to write the article