The user “Margarita Garcia” posted in the late evening of May 11 that screenshots were being spread on Azerbaijani Telegram channels. These screenshots allegedly proved that Anton Ivchenko, one of the coordinators of the “Independent Observer” bloc, passed videos and other information to the Azerbaijani side for money. The user then added, “later we found out that this person is leading observers, who are supposed to monitor the elections to make sure they are not rigged.”

As it turns out, the screenshots were fake.

“Margarita Garcia’s” post was no longer available hours later. The images attached to the post showed that Anton Ivchenko, one of the coordinators of the “Independent Observer” bloc, sent videos of the murder and torture of Azerbaijani servicemen with the participation of servicemen of the RA Armed Forces and demanded the money for them.

This post has been shared 90 times. In the comments of the post, the author urges not to share the content, but to upload the pictures on their pages, because “they are sending spam to my page, it may be closed.” She urged users to spread the images in different groups. 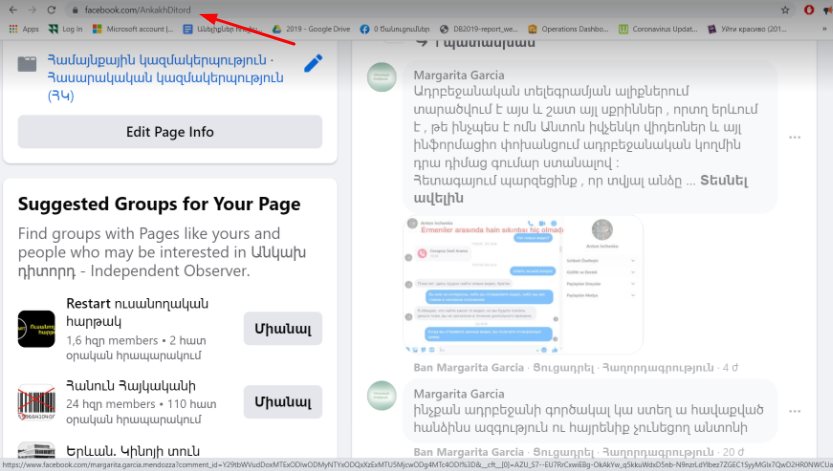 This same image has been sent to different users through other accounts. 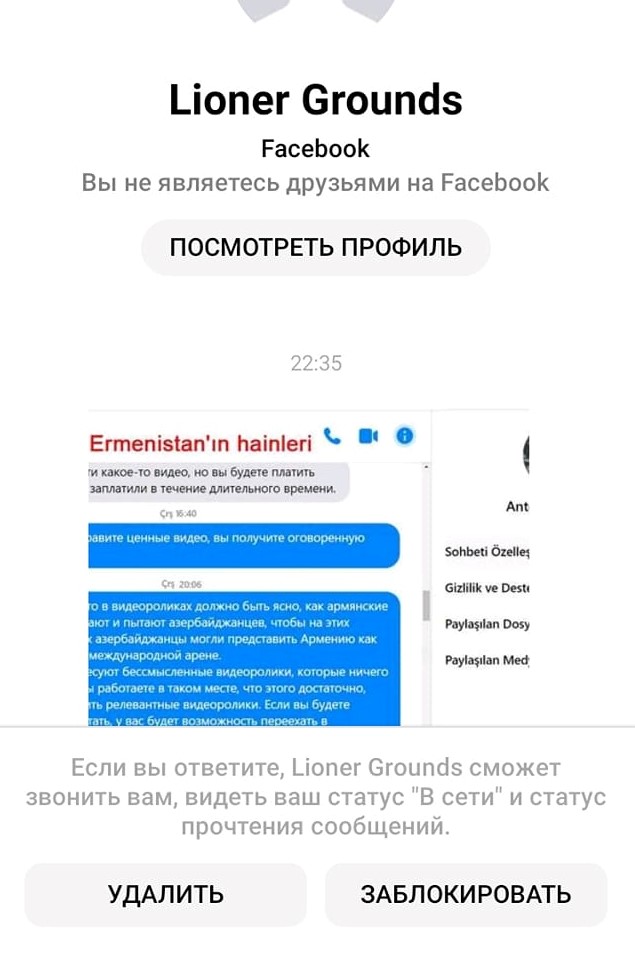 Margarita Garcia’s account is no longer available, so there is no post. However, according to the available data, we managed to find out that she mentioned 9 accounts on the post. 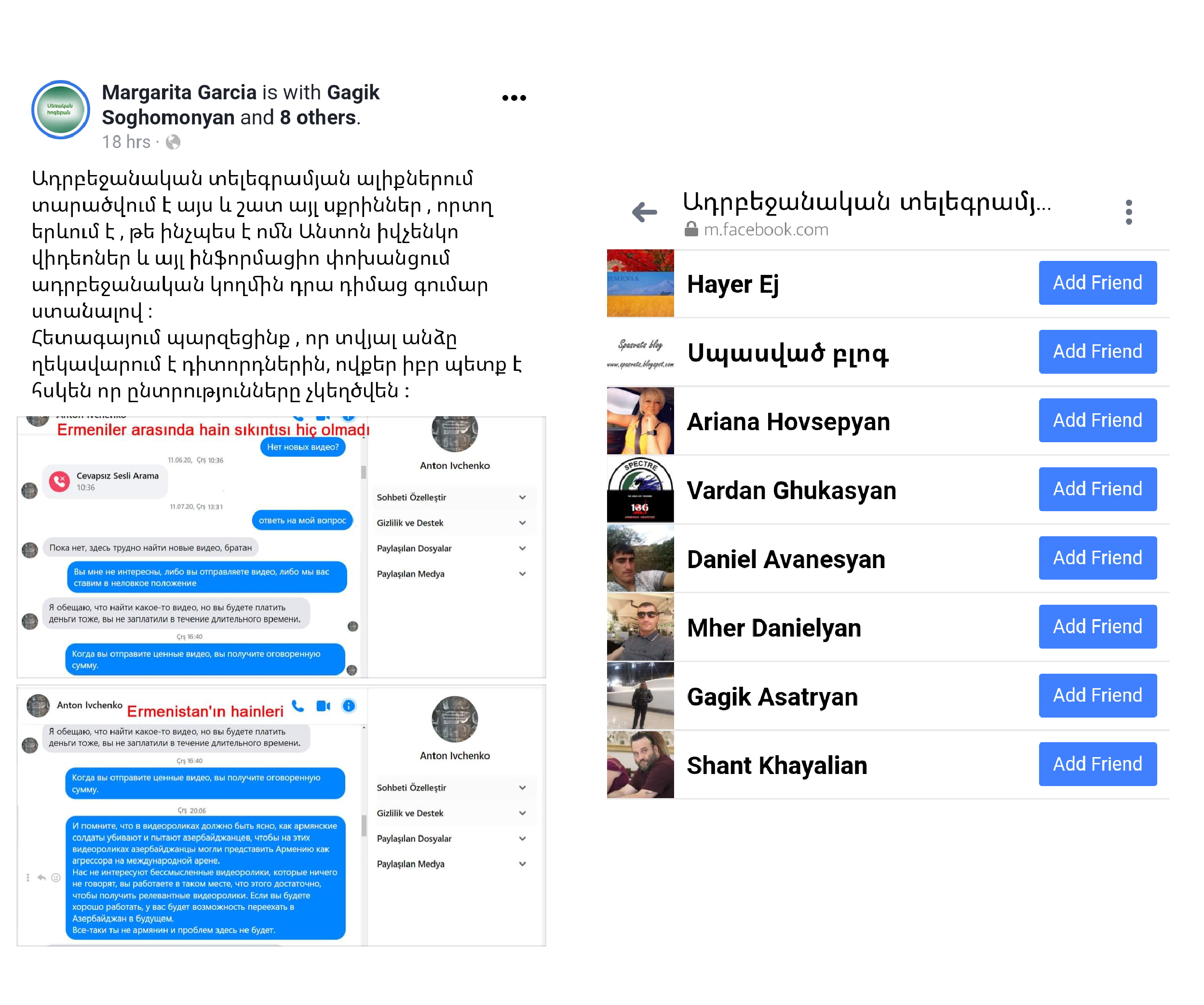 Among the mentioned are:

The other mentioned pages and personal accounts either have not published anything for several years or distribute oppositional content.

The distributed content is not real: There are traces proving this

Anton Ivchenko touched upon the news about him in a Facebook post. He said that the “fake account” spreads “screenshots of an unknown origin,” in which there is a copy of his Facebook account. “One is a fake Anton, the other is an unknown Azerbaijani agent,” he wrote.

In the comments of his post, users checked the facts, which showed that the pictures were not real.

Media.am verified these allegations and confirms the following:

1․ The messages in the Facebook social network messenger are left and right. The right alignment in the published messages is violated, which is a sign of editing. 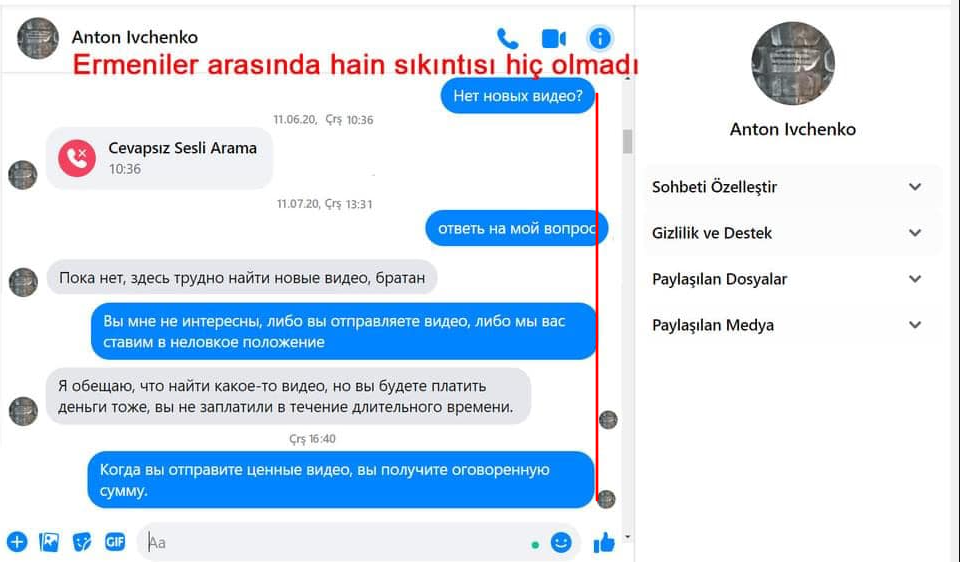 In addition, there are applications that allow you to create chats similar to different messengers. With them, it is possible to send and receive messages on behalf of any person, with any image, at any time.

2․ The messages show the day of the week of sending the messages in Azerbaijani, which, despite the change of dates, is always the same day – Wednesday (çrş – çarşamba). In fact, June 11, 2020 was Thursday, July 11 was Saturday. 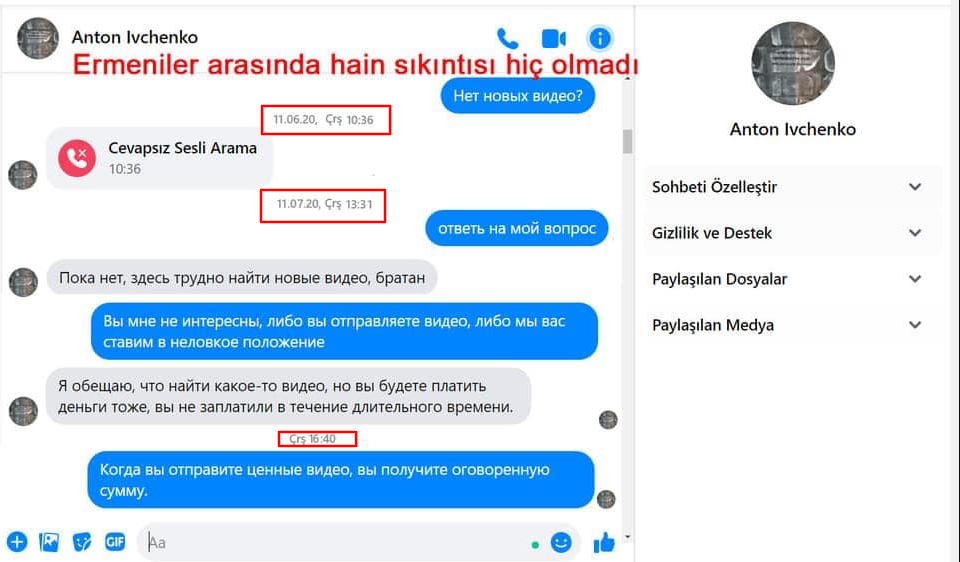 3․ The correspondence started on June 11, 2020, and the reply was sent a month later, on the same day. But during this period there were no border incidents. The battles of Tavush in 2020 started on July 12, and the second Artsakh war on September 27.

Anton Ivchenko also drew attention to language in his post: His first language was Russian, so it was difficult for him to offer his services and demand money in the “ignorant and unrefined Russian” as in the correspondence.

In his post, Ivchenko also insisted that this campaign is not against him, but against the “Independent Observer” bloc. He is one of the coordinators of this alliance. According to him, the dissemination of this false content is done to discredit the observation before the special parliamentary elections of 2021. He also stated that he was reporting a crime of false accusations of treason.