The Security Council Session With Declassified With “Certain Expediency”

On April 15, the Security Council office released declassified documents in response to the statement of the former Chief of the General Staff of the RA Armed Forces Onik Gasparyan that on the fourth day of the war he had informed the Security Council about the need to stop the war within two or three days.

Media.am sent inquiries to the Security Council office and the Prime Minister’s spokesperson to find out according to which legislative provision the declassification was carried out, what was the reason for the publication period and whether we should expect complete declassification in the near future.

The declassification took place 5 months after the announcement։ under what circumstances?

A few days after the trilateral announcement of the cessation of the second Artsakh war, on November 17, 2020, the Chief of General Staff of the RA Armed Forces Onik Gasparyan issued a statement. He informed that on the fourth day of the war, during the Security Council session, he presented the losses of the Armenian side and the assessment of the armed forces on the situation.

Gasparyan noted, “It is necessary to take measures to stop the war in two or three days, otherwise in case of such intense hostilities, our resources will be exhausted in a short time and we will have more unfavorable conditions for the negotiation process with each passing day.”

The Security Council responded to this announcement 5 months later: In 2021, in mid-April, several excerpts of the minutes were published.

It was seen in the excerpts that on the fourth day of the war, on September 30, the Chief of General Staff reported that “the enemy did not make any progress …”, “… in any case the troops are doing their job,” the Armenian side counterattacked Jabrayil, have achieved success, continue to fulfill their task and “we will continue to fulfill until the end.” 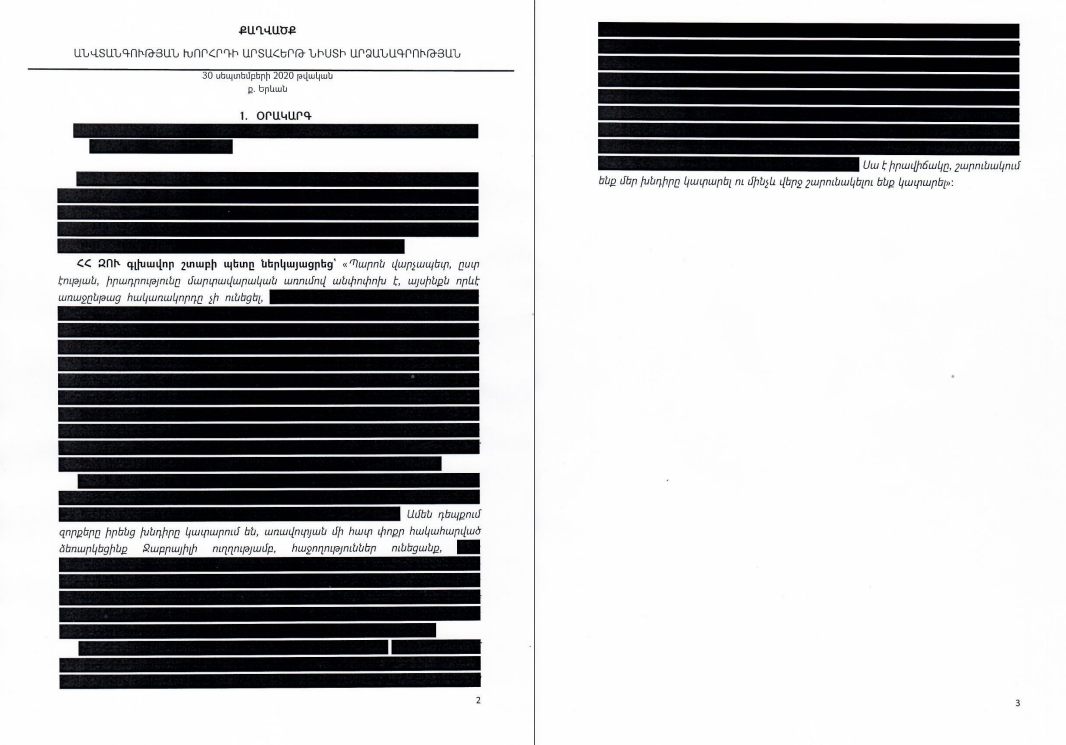 The published excerpts confirmed the statement of Prime Minister Nikol Pashinyan in the National Assembly on April 14, one day before the declassification, that Gasparyan did not say about stopping the war during the Security Council session, on the fourth day of the war.

On the same day, Pashinyan, in response to the question of the leader of the “Bright Armenia” faction Edmon Marukyan, invited him from the NA tribune to get acquainted with this protocol of the Security Council sitting. He also announced that Marukyan’s proposal to partially declassify the protocols will be considered.

This was followed by the publication. A few days later, the recording of the same parts of Gasparyan’s speech was made public.

The day after the declassification, Gasparyan stated that the published “selected sections” did not fully reflect the content of the reports, “thus deliberately distorting the reality, which is manifested by cheap behavior by the current government of the Republic of Armenia.”

He addressed the chairmen of the NA and Defense Committees, the heads of the NA factions with the proposal to set up an investigative commission to study the circumstances of the 44-day war.

Pashinyan had missed the opportunity to deny Gasparyan before. He spoke about this topic in an interview with “Azatutyun TV” a month after the announcement of the head of the General Staff. He said that appropriate work had been done to stop the war.

Prime Minister Nikol Pashinyan once again touched upon this topic on May 3 from the NA tribune. He raised a rhetorical question, “Should the country’s Prime Minister enter into a public debate with his subordinate? Are you serious?”

From this answer, it becomes clear that the declassification was done by the decision of the Prime Minister.

The Security Council’s office clarified that the publication was made to the extent and to the extent that it was “considered expedient to dispel the widespread questions among the public.” At the same time, the fact of not harming the state interests of Artsakh and the Republic of Armenia was taken into account.

“At the moment, there is no need for additional publication and clarifications, but if necessary, we do not rule out additional clarifications,” the office said. As for the chosen period, they clarified that it “is conditioned by a certain necessity and expediency.”

The Prime Minister’s Office did not clarify the process

In response to our written inquiry, the Information and Public Relations Department of the Prime Minister’s Office did not provide a substantive answer. They only clarified, “the exception was made in accordance with the law, so all the established procedures were observed.”

The other two questions of the written inquiry coincided with the questions sent to the Security Council: the answers were repeated.