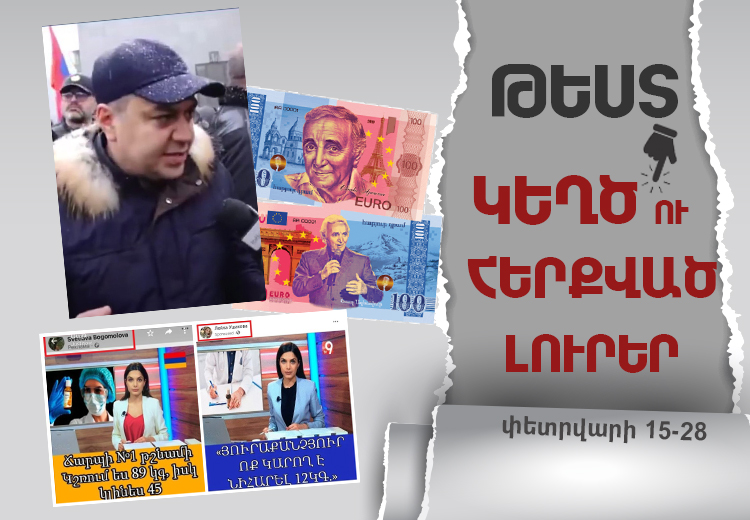 In the second half of February, there was no shortage of news in Armenia, including false news. Take the Media.am test and try to recognize as much false or manipulative news as possible. Read more about all these stories in the article.

The opposition rally was not canceled

On February 20, before the opposition rally, Facebook user Sargis Manukyan wrote that the rally would not take place due to heavy snow. The user did not mention any source of this information, but asked to spread his post in order to “inform the citizens․”

The information was wrong․ The February 20 rally took place.

During the February 20 rally, Arthur Vanetsyan, former head of the National Security Service and leader of the Homeland party, responded to the government’s accusation that he had left the village of Shosh during the war.

Vanetsyan said,  “Shosh village is the only village in Shushi region that is still under the control of the Armenian side. How did we hand over the village of Shosh, which is still under Armenian control?”

Journalist Tatul Hakobyan commented on Vanetsyan’s words, noting that Shosh is a village in the Askeran region, and a number of villages in the Shushi region are under Armenian control.

On this map you can see the settlements under Armenian control.

Politicians distort the number of deaths and injured

Politicians mentioned different numbers several times while talking about the dead and wounded in the second Artsakh war.

Thus, on February 28, singer, former RPA MP Shushan Petrosyan spoke of “up to 7,000 deaths.” Petrosyan did not mention the source of this information. According to official data, the number of deaths on the Armenian side reaches 3,577.

Earlier, former Minister of Justice Arpine Hovhannisyan announced about 10,000 amputated soldiers. But this number is also problematic. According to the Ministry of Labor and Social Affairs, 120 to 130 servicemen need prosthetics.

False and manipulative allegations were made during two parallel rallies

On February 25, after the announcement of the General Staff demanding the resignation of the Prime Minister, opposition and government rallies took place in Yerevan at the same time. Media.am followed the events and singled out the incorrect or manipulative news of the day.

? The media wrote that the statement of the General Staff was considered by the “My Step” bloc “a political statement made by separate individuals from military.” In fact, the statement was signed by several dozen high-ranking military officials.

After writing the news sites, a text was published on the My Step Facebook page, which did not contain the wording about “separate individuals in the military.”

? Turkish Foreign Minister Mevlüt Çavuşoğlu condemned the statement of the Armenian General Staff, considering it an attempt at a military coup. The statement was also condemned by the Armenian deputy of the Turkish parliament Karo Palyan.

The press and politicians in Armenia manipulated Çavuşoğlu’s statement, claiming that he “expresses his support for Nikol Pashinyan.” This assertion was manipulative. Çavuşoğlu did not say anything about supporting Pashinyan.

? The Armenian and Russian sides spread different statements about the telephone conversation between Nikol Pashinyan and Vladimir Putin. The Armenian side noted that “President Putin expressed his support to the legitimate authorities of Armenia. This wording was missing in the statement of the Russian side.

Moreover, this measure is not registered in Armenia, and its sale is illegal.

The banknote with the image of Aznavour was not real

Director, chairman of the European Party of Armenia Tigran Khzmalyan wrote on his Facebook page that a 100-euro banknote with “images of Aznavour, Ararat, Etchmiadzin and even the Armenian dram” had been put into circulation in France.

News and mushroom websites spread Khzmalyan’s post without checking. The banknote, however, was not real. These photos have been available on the Internet since 2019. Moreover, the banknote can be found on eBay, the price is $4.

? The National Security Service denied the information spread by Livenews.am that a “group of special detachments” had arrived in Armenia from Turkey.

? The spokesman of the Armenian National Congress Arman Musinyan denied the information spread by the website newsmedia.am that Prime Minister Pashinyan visited the private house of the first president Levon Ter-Petrosyan.

? The Prime Minister’s spokesperson Mane Gevorgyan denied the rumors that Vagharshak Harutyunyan was relieved of the post of Minister of Defense.

? Prime Minister Pashinyan denied the information spread after the announcement of the General Staff that he was planning to flee Armenia, and a plane was prepared for that. Pashinyan announced that he and his family were not going to leave Armenia under any circumstances.