False And Refuted News Of December 1-15 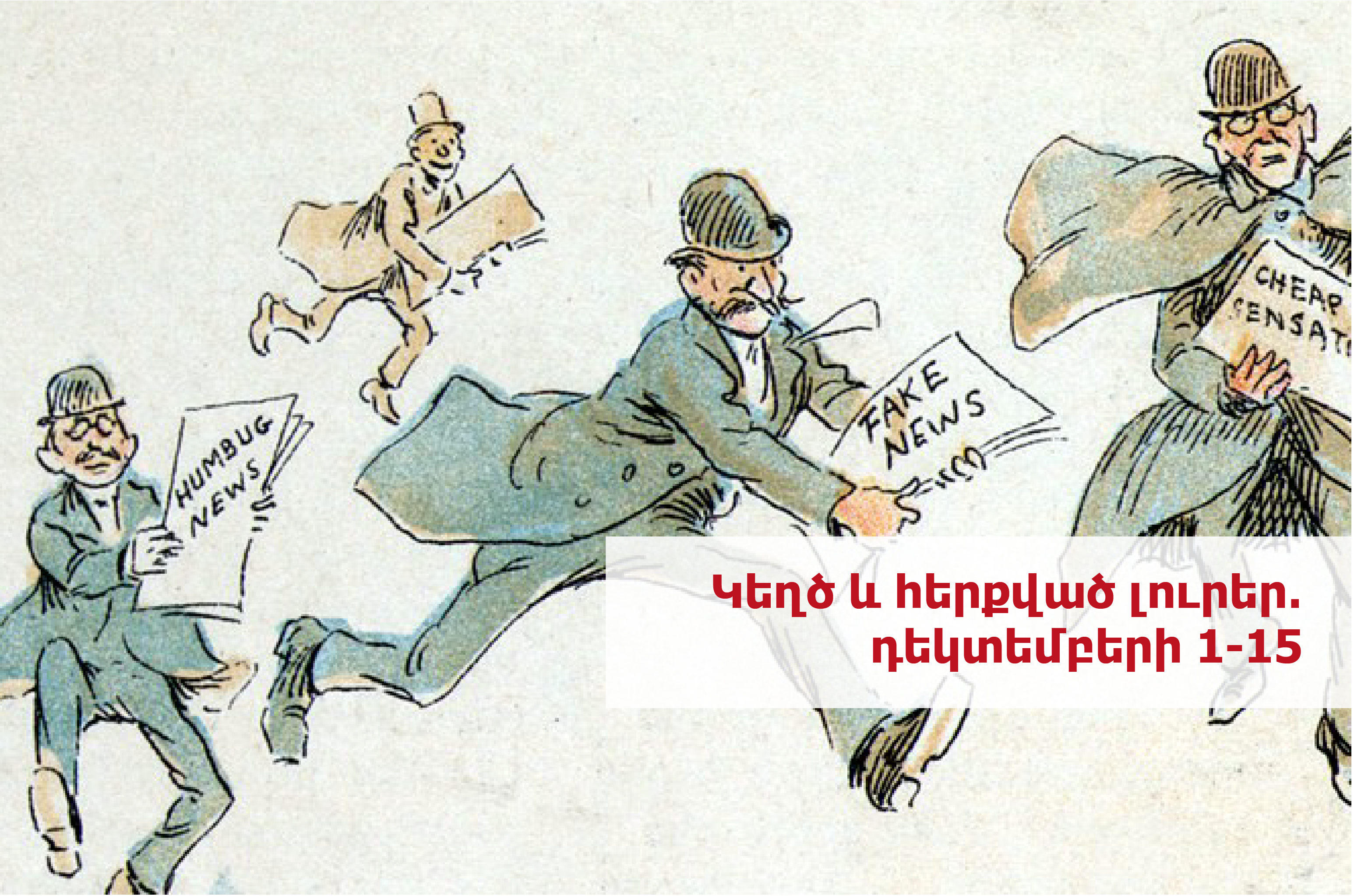 In the first half of December, the post-war developments continued to be a cause of misinformation. The Syunik region had several reasons to spread denials. The news about the resignation applications and criminal cases were not confirmed by several departments.

There is no Albanian-Udi preacher in Dadivank: The Armenian clergy are serving

At the level of the Deputy Minister of Culture in Azerbaijan, Dadivank was first considered to be Albanian, and after the handover of the territories, the media of the same country insisted that Albanian-Udi Rafik Danagari had been appointed a preacher of the monastery.

In a conversation with RFE/RL, this information was denied by the deputy head of the Artsakh Diocese, T. Bishop Vrtanes Abrahamyan. According to the clergyman, the Udi was not even a clergyman, he was not ordained. The Udis came accompanied by soldiers and journalists, spent two hours and left.

After this visit, there have been no Azerbaijanis or Udis in the territory of the monastic complex. 6 Armenian clergymen have been continuing their service. Russian peacekeepers are serving in the same area.

Armenia can not yet make a final purchase of the vaccine

Spokeswoman for the Ministry of Health Alina Nikoghosyan said on December 7 that Yerevan.Today Editor-in-Chief Sevak Hakobyan had spread misinformation. The latter asserted that the Ministry of Health paid more than $6 million for the American vaccine, “which had neither a license nor a usage permit and so far nothing has been made known about it to the public.”

The speaker shared information that the Ministry of Health did not pay for any specific vaccine for the coronavirus. As it is mentioned in the post, Armenia has signed an agreement with “Covax” platform for the purchase of the vaccine. However, Hakobyan missed the most important thing in the post: more than 180 countries of the world cooperate with this company.

“Registered vaccines are being studied here, including the Russian one. All potential vaccine candidates are still undergoing clinical trials, one of which has not yet passed all stages. Accordingly, Armenia cannot make a final purchase of the vaccine yet,” Nikoghosyan said.

Media.am touched upon the misinformation that was being spread about Russian and American vaccines.

The news that Prime Minister Pashinyan’s underage children took refuge in the house of actress Arsine Khanjyan in Canada does not correspond to reality.

The actress found out about these conversations from film documentarian Seda Grigoryan. “She approached it with humor, saying that it was interesting news for her, that they would gladly host the children of those who spread this false news. She didn’t give it too much importance,” Grigoryan wrote.

? On December 1, the regional administration informed that no demarcation work is being carried out anywhere in the region, the issue of handing over any village from the region is not being discussed, and Kapan airport is located and will remain in the territory of Kapan community.

? On the same day, the municipality of Kapan denied the opinion of Karen Hambardzumyan, a deputy of the “My Step” faction, who stated that “supposedly our and Azerbaijani troops were drawing the border and had reached the Kapan community.”

? On December 7, Deputy Governor Narek Babayan denied the rumors that the Armenian side had ceded territories in the village of Aravus. The previous day, together with the corps commander, they met with the Azerbaijani side to discuss the landscapes. “They were brought back to some extent, but in the administrative territory of Lachin. Not even 1 meter of land has been conceded from the administrative territory of Syunik and the state border of Armenia,” Babayan said.

? On December 13, the regional administration denied the spread information that the enemy made an attempt to attack the defensive positions in the direction of Agarak village and  Kapan and fired incessantly for half an hour.

The next day, in a conversation with Armenpress, the governor Melikset Poghosyan clarified that the previous day, from the front line near the two villages, the enemy had said over a loudspeaker, that they should go back to their administrative territories by such and such time. “But it does not mean that we have to carry out their order,” said the governor.

? On December 14, Prosperous Armenia MP Naira Zohrabyan announced that she had spoken to the head of the Khndzoresk community of Syunik region on the same day and had been informed that the Azerbaijani side had demanded that the Khndzoresk residents withdraw. In a conversation with Fip.am, the head of Khndzoresk community Yervand Malunts informed that he did not talk to Zohrabyan. Moreover, “I have never even seen her before.”

The villages of Gegharkunik will not be yielded to Azerbaijan

Gegharkunik regional governor Gnel Sanosyan informed on December 13 that the rumors that some parts of the region and positions will be ceded to Azerbaijan do not correspond to reality. The matter concerned the villages of Jil, Pambak and Daranak. The governor informed that the Armenian Armed Forces are fulfilling their tasks in all directions.

Why did the village of Charektar remain Armenian?

The video published by American journalist Patrick Lancaster from the village of Charektar in the Shahumyan region was widely spread. Ashot Sevyan, a resident of the village, firmly said that he would stay in the village until the end and that they would never hand it over to the enemy.

On December 2, news spread on social media that the village would not be handed over to Azerbaijan thanks to the efforts of this resident of Charektar. A number of websites wrote about the news.

Media.am found out that the village was not ever planned to be handed over. The news of it being handed over had been wrong from the beginning, its author was the Armenian government. It continues to remain on the Armenian side, as it was in the Martakert region of the NKAO during the Soviet period.

Pashinyan’s resignation was not planned

In a matter of minutes, the news was denied by the official page of the “My Step” faction.

The Russian broadcaster Vladimir Solovyov spread information about this and then denied it.

The Special Investigation Service denied the statement of “One Armenia” party leader Arthur Ghazinyan that “the SIS has initiated a criminal case against Nikol Pashinyan and a group of other high-ranking officials, noisy arrests are expected.”

NSS clarification: the system is not being abandoned en masse

On December 3, the NSS of Armenia issued a clarification on the news of the system being left en masse. The source of the information was the statement of the former NSS employee Grigory Tavadyan.

According to the organization, from November 10, 2020, until the day of the announcement, 5 employees were fired due to reaching a certain age, 3 on the basis of transfer to another job, as well as the termination of service duties of war victims.

A deputy refutes a deputy

Maria Karapetyan, a member of the “My Step” faction of the National Assembly, denied the assertion of her colleague Ani Samsonyan from “Bright Armenia.” The latter stated that in a closed session of the parliament Karapetyan said that the Armenian captives in Azerbaijan are being treated well.

“After the videos about our captives, it is unthinkable for any member of the National Assembly to say that our captives are being treated well. This attribution cannot be grounded,” Karapetyan told reporters.

The MP added that during the sitting she considered the statement of BAP leader Edmon Marukyan that Azerbaijan was going to walk the Armenian captives during the parade, untrue, after which Marukyan called her “Turkish-loving” or “Azerbaijani-loving.”

The “Union of Informed Citizens” (UIC) demanded a denial from “ArmNews” TV for the false information contained in the video titled “Occupation of the State” broadcast on December 5.

The video, among other things, says that the organization “received about 81 thousand dollars from the Soros Foundation in January 2018, a few months before the change of government, to train 50 journalists and 75 activists to participate in civil movements.”

The organization clarifies that the UIC received “about 81 thousand dollars” not from the “Open Society Foundation,” but from the European Union, and the mentioned training sessions were not before the revolution, but after.

❌ The Prime Minister of Armenia Nikol Pashinyan denied the rumors that the tripartite statement on the ceasefire in the Nagorno Karabakh conflict zone has an appendix. He stated this during a question-and-answer session with the government in the National Assembly.

❌ The police denied the news spread in the media and social networks that the head of the police Vahe Ghazaryan had resigned.

❌ Artsakh denied rumors about giving Russian the status of a second state language.

❌ The Ministry of Justice denied the rumors about the minister giving his resignation.