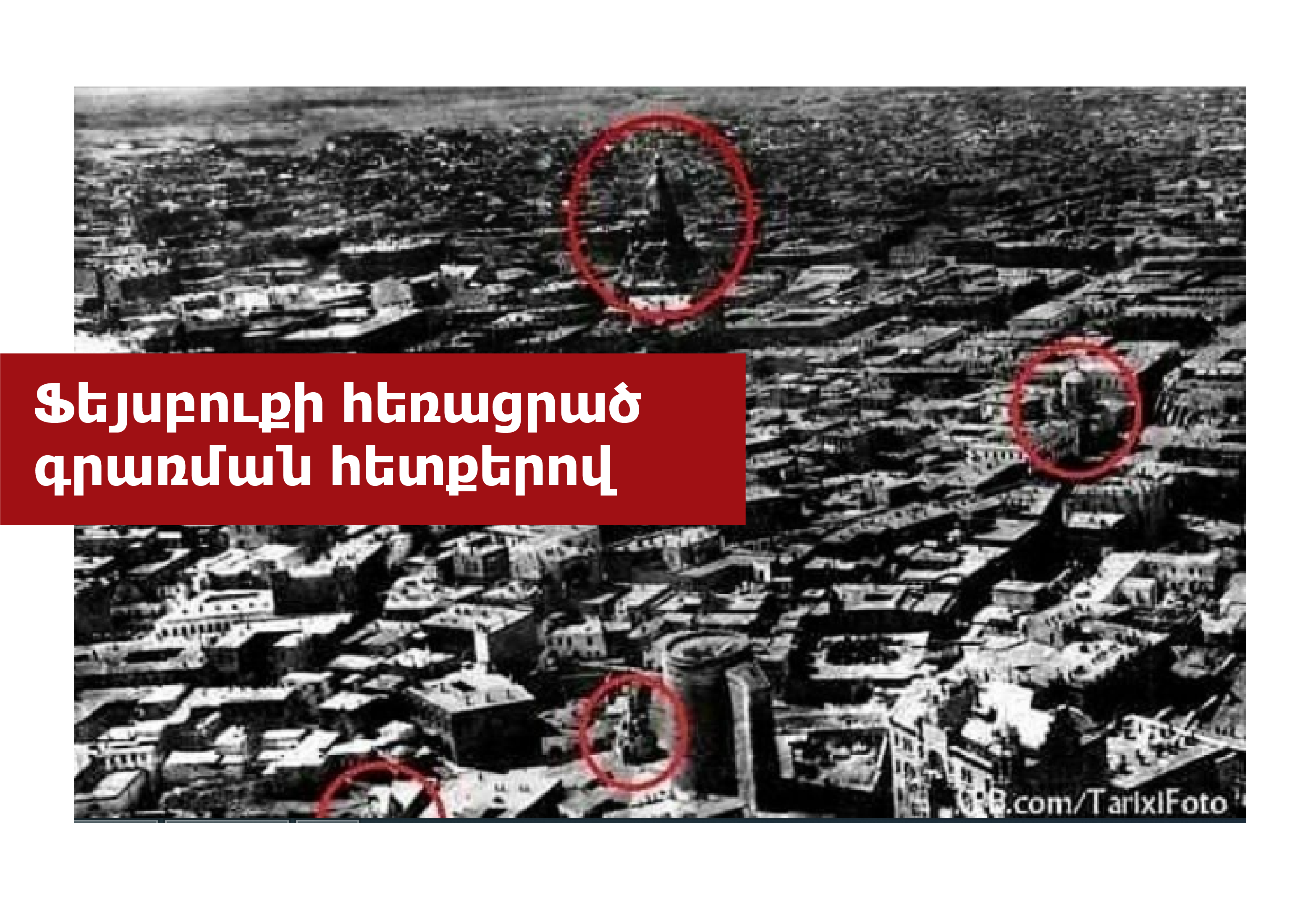 On December 1, the first list of posts removed by Facebook was published, which summarized 6 cases when the Facebook Oversight Board blocked the platform’s policy and content against the established ethical norms. One of the deleted posts referred to the Armenian churches in Baku, which were destroyed by the Azerbaijanis over time. The reason for the dismissal was the insults and hate speech against the Azerbaijanis in the post.

The decision to create the Oversight Board was made in 2018. It was going to try to improve the process of Facebook users’ complaints, to filter it from hate speech and calls for violence. The platform started its activity in 2020. The further fate of the removed records is decided by the same body as a result of consultations with independent experts.

Let’s try to understand how real the claims of the user are and whether it was correct to block the latter’s post.

The author of the problematic post is user Areg Barseghyan. On November 2, the latter published a photo taken in Baku at the beginning of the 20th century, underlining the churches built in the center of the city with a red circle and writing next to them that none of them are preserved now. The user also mentioned that, unlike Azerbaijan, mosques in Armenia are being reconstructed. 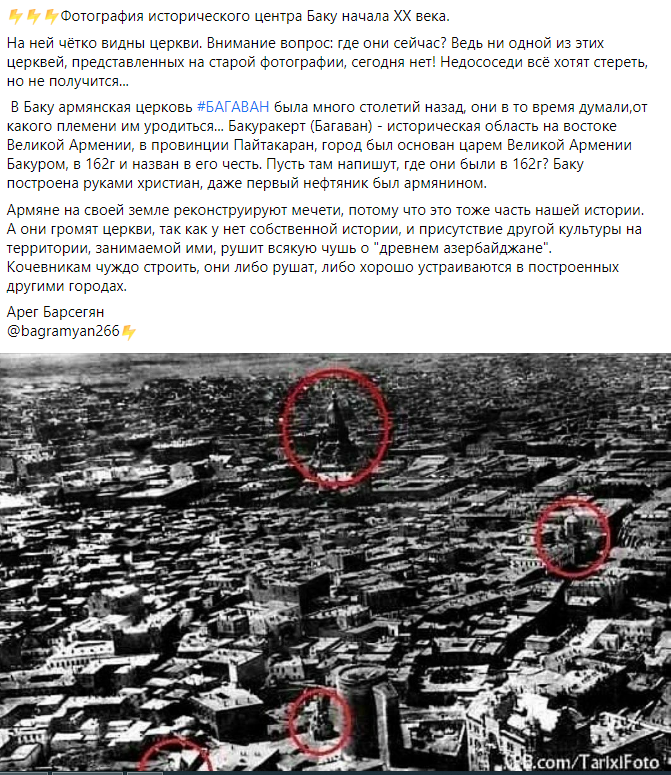 Facebook removed this post the very next day when it managed to have more than 6,000 shares, spread widely on Telegram and Facebook, and appeared in the news. 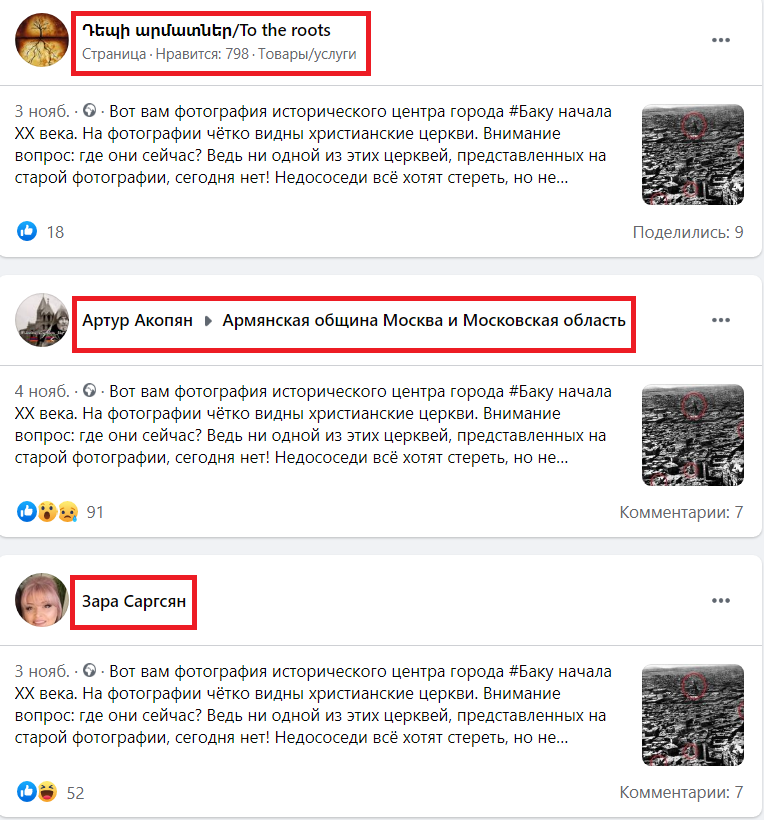 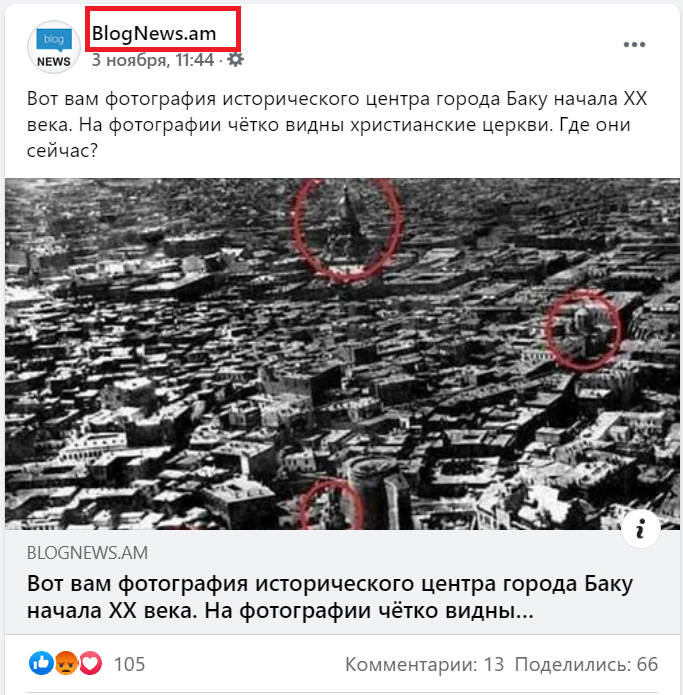 Interestingly, the post republished by other users was not removed, unlike the original.

According to Facebook, Areg Barseghyan’s post contained hate speech. Particularly problematic was the use of the word “т.а.з.и.к.и”, with which the user describes “Azerbaijanis destroying churches.” The social network has published the criteria for differentiating hate speech and expressions, which have 3 levels.

expressions aimed against people or groups of people that degrade dignity by comparing them to this or that group/person.

The most commonly used (and banned on Facebook) words in such cases are:

. statements that exclude the existence of any entity

. Comparisons that violate the dignity of the person, including the comparison of people with dark skin with monkeys

Phrases that attempt to evoke a sense of inferiority in a person or group of people in order to re-target their physical and intellectual abilities. In such cases, the frequently used words (prohibited by Facebook) are:

Areg Barseghyan’s description “t.a.z.i.k.i.” addressed to Azerbaijanis can be included in the list of expressions that violate the dignity of the person, which are compared to people’s things or phenomena in order to subordinate them. In this regard, we can say that Facebook editors were not wrong. However, it is interesting why Areg Barseghyan’s post was included in the first list, when there are hundreds of thousands of similar comments and posts.

Were the user’s claims true or false?

According to various sources (1 2 3) before the establishment of the Soviet regime, there were 5 Armenian churches in Baku: Church of St. Gregory the Illuminator, Church of the Holy Virgin, St. Thaddeus-Bartholomew Cathedral, the Resurrection Chapel and the Armenian-Lutheran Church. As of 1989, only 2 Armenian churches remained standing: St. Astvatsatsin and St. Gregory the Illuminator. Now only the last one has been preserved.

Let’s try to understand, are those pictured in the photo really Armenian churches?

The Maiden’s Tower in the photo proves that it was really taken in Baku, in the Icheri Sheher district. 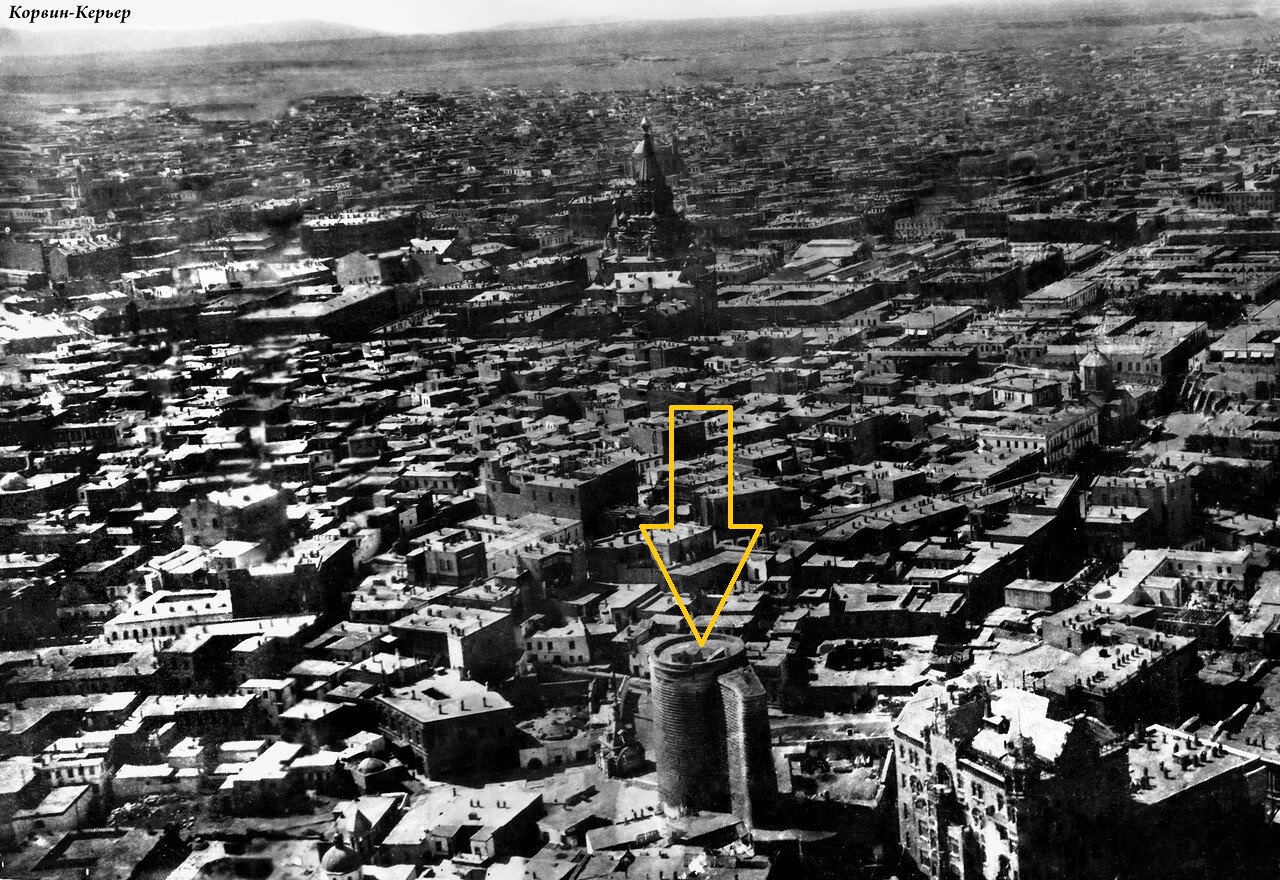 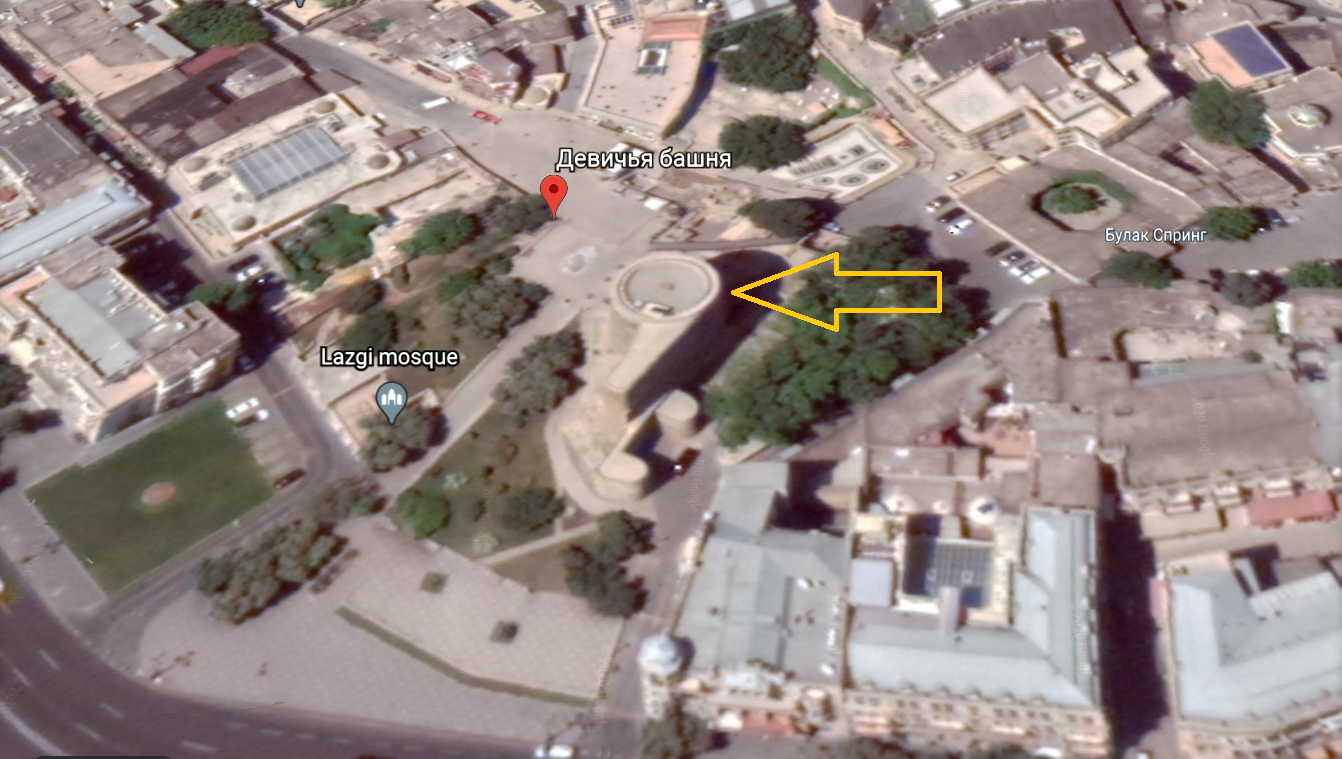 Adjacent to the tower is the Church of the Holy Virgin, built in 1797 or 1799, which the user rightly mentioned as non-existent. As recently as the 1990s, St. Astvatsatsin Church and the two floors of the church bell tower were completely destroyed. 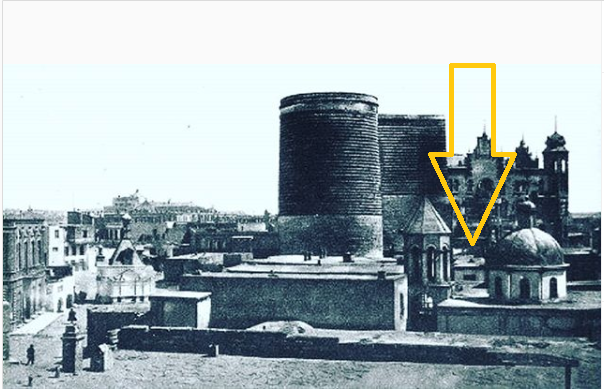 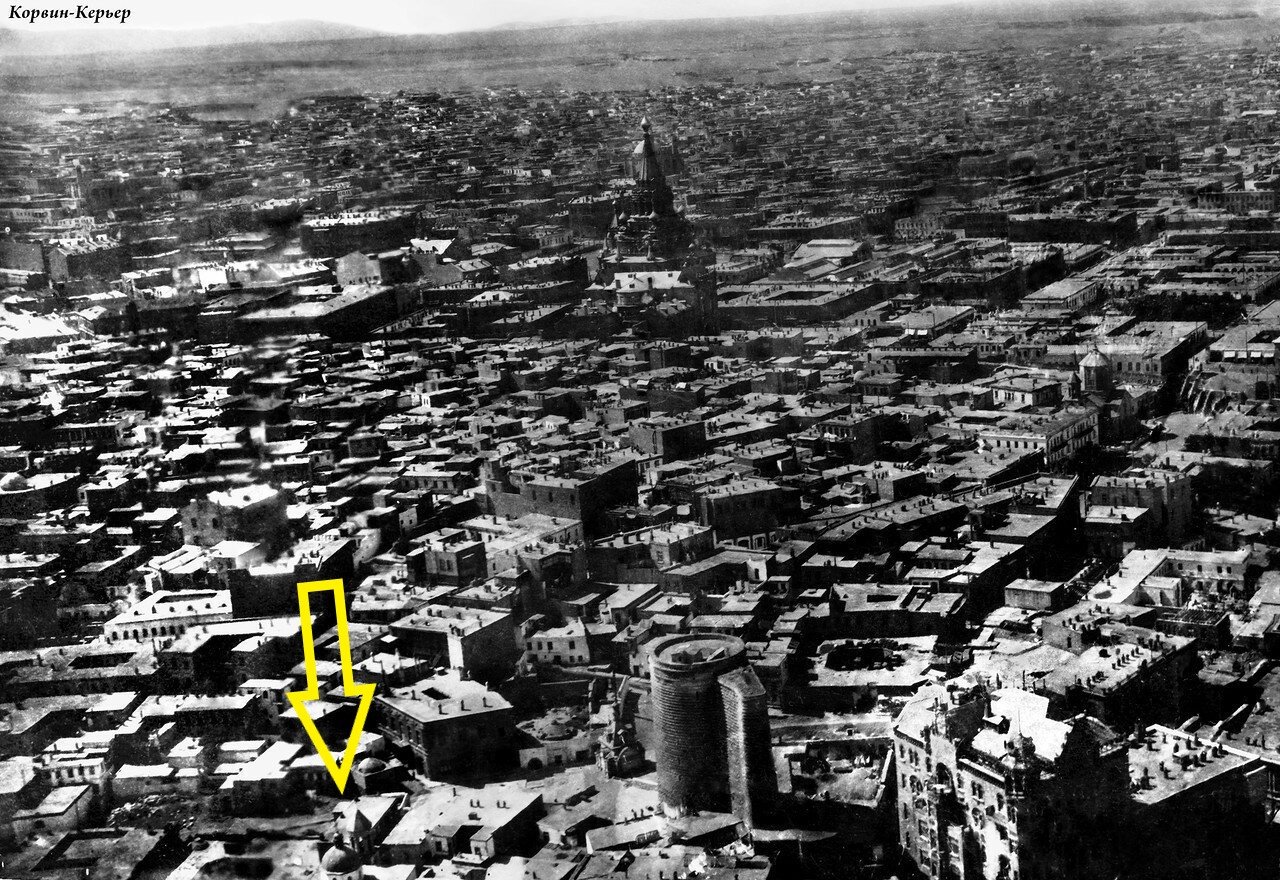 Church of the Holy Virgin past and present 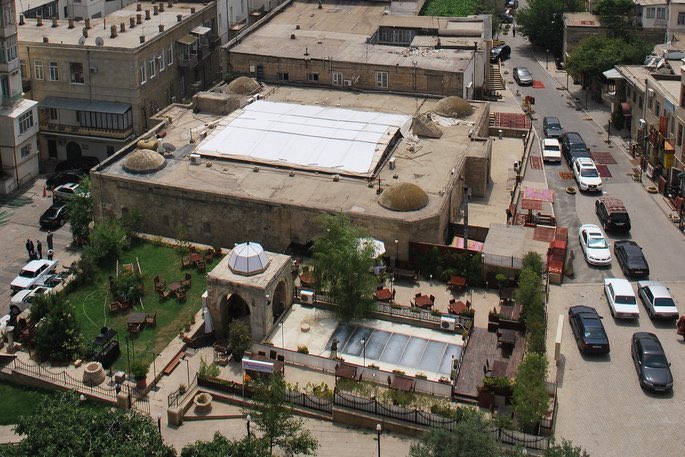 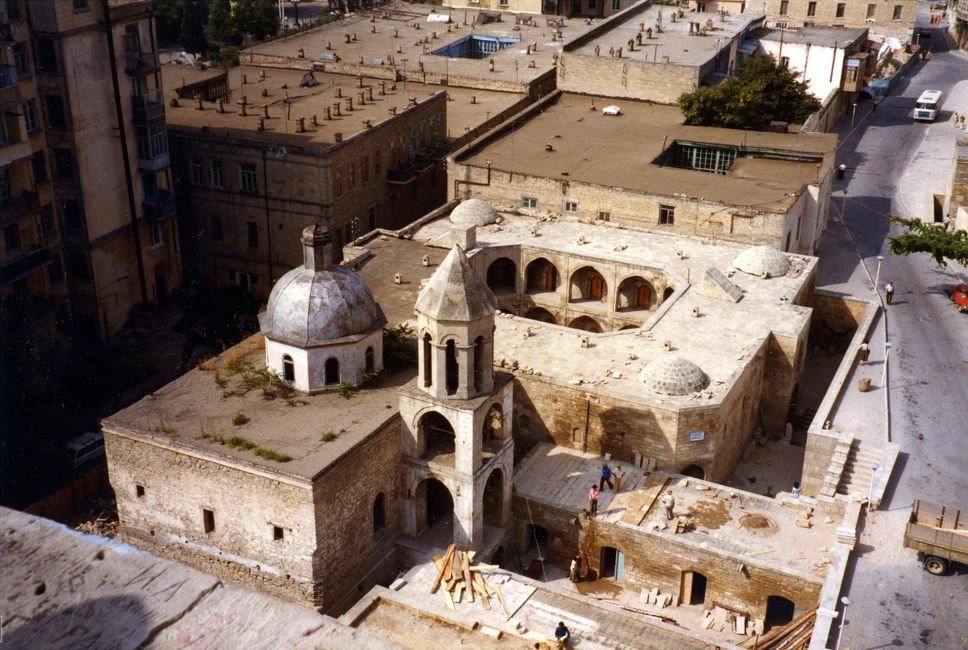 Now, the only functioning church, Saint Gregory the Illuminator Church built in 1863, does not appear in the picture. It is located in the center of the city, next to Fountain Square, on Nizami Street. It is about 600 meters away from the Maiden Tower. 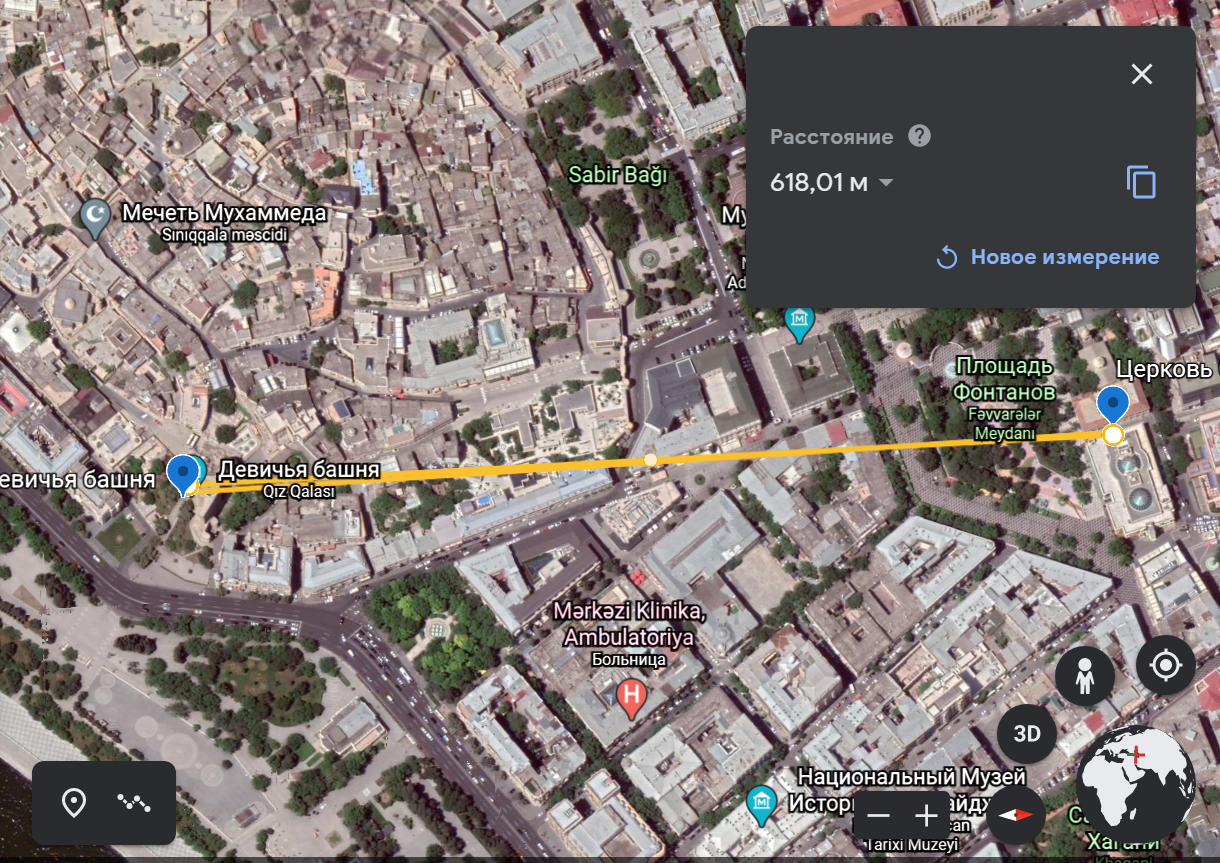 St. Thaddeus-Bartholomew Cathedral was the largest of the Armenian churches in Baku. It was completely destroyed in the 1930s. 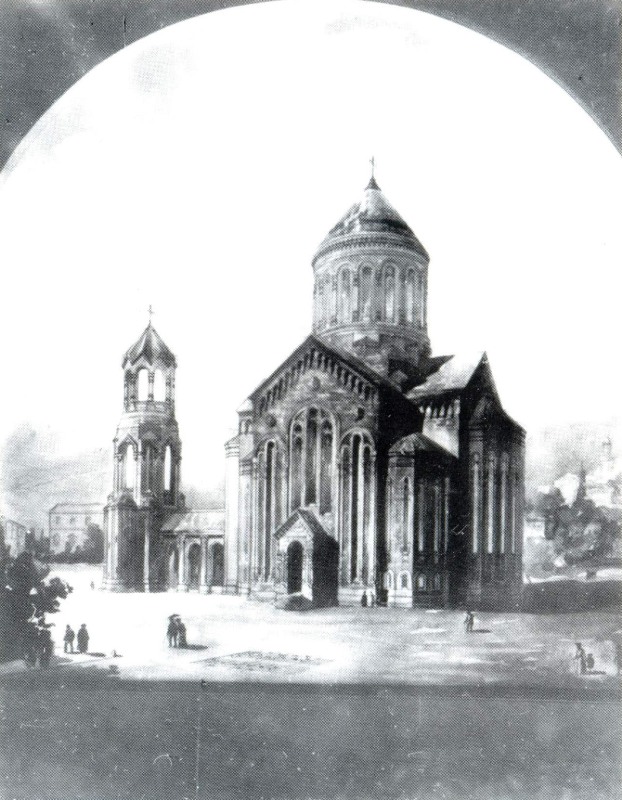 The location of the church, however, is further away from the pictured part of Baku. It was located on what is now Badalbeyli Street in Shamsi, about 700 meters from the Maiden’s Tower, and the structure does not look like any of the churches in the picture. 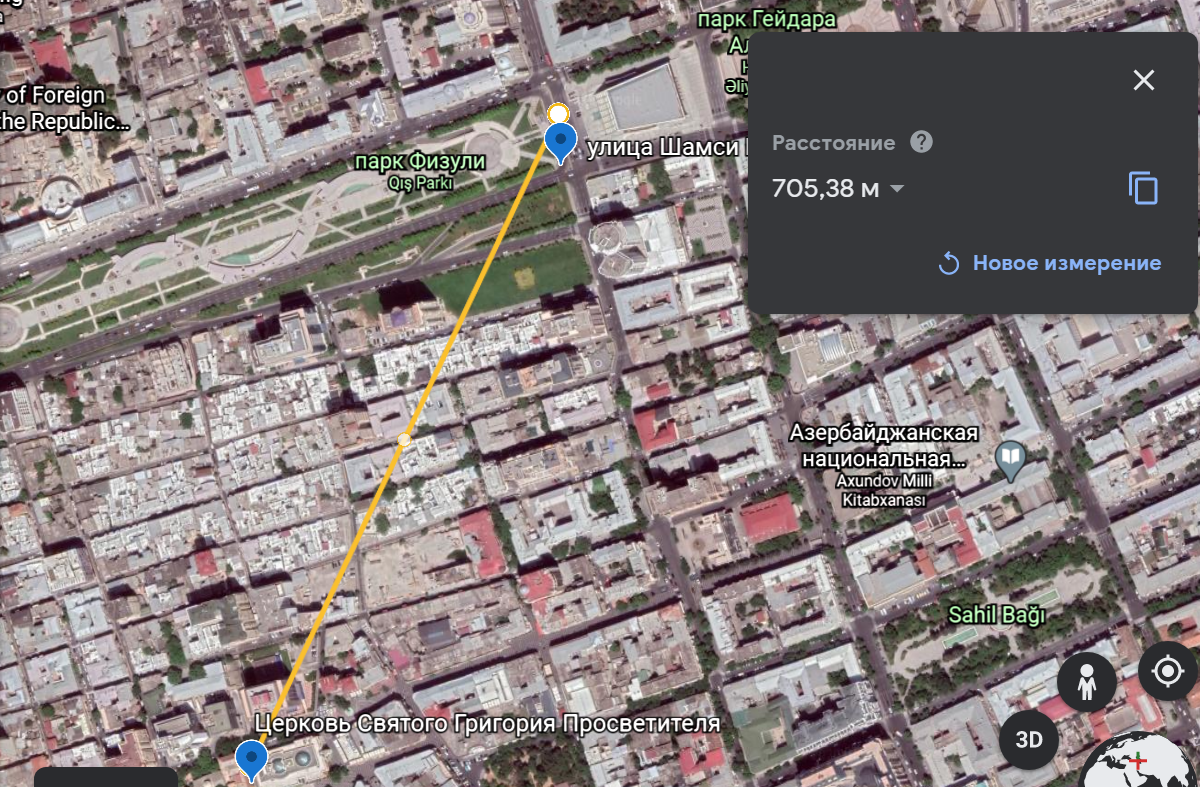 The small church directly in front of the Maiden Tower is the Holy Resurrection Chapel. 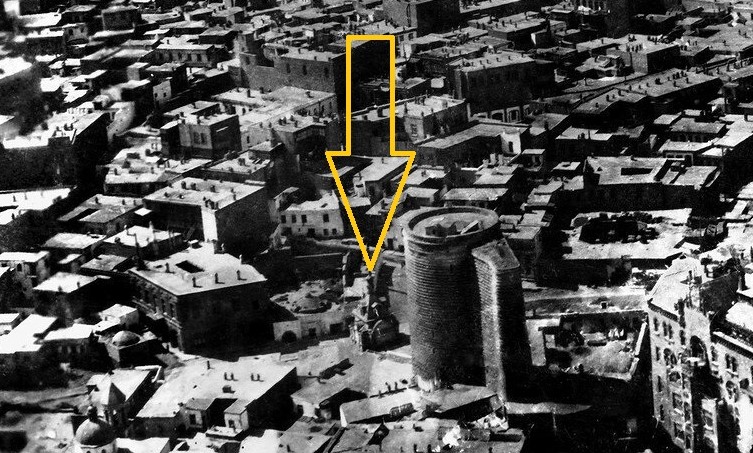 It operated during 1892-1936. However, in various sources, it is mentioned as the Russian Church in Baku. The building does not look like an Armenian church. 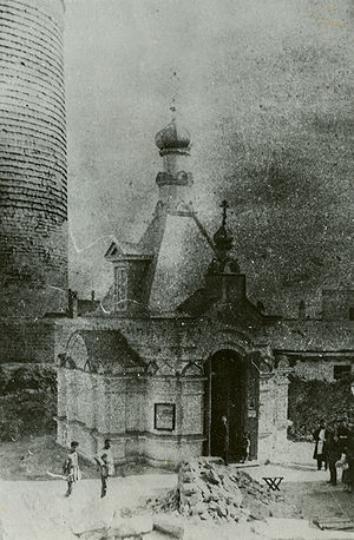 The last-mentioned church, the 5th, is the Armenian-Lutheran one. What is known about the latter is that it was built in 1912. The church was rented from the Evangelical Lutheran Church (Лютеранская кирха). The Armenian-Lutheran church was destroyed and turned into a concert hall. There are no preserved pictures from the latter, but considering that it was located near the Evangelical-Lutheran Church on May 28th Street, we can say that it could not be seen in the photo because of the great distance.

The user’s reference to the ruined Bagavan church in Baku is incorrect, as the famous Bagavan was located not in Azerbaijan, but in Turkey, on the left bank of the Aratsan (Murad) River. It was destroyed in 1953. 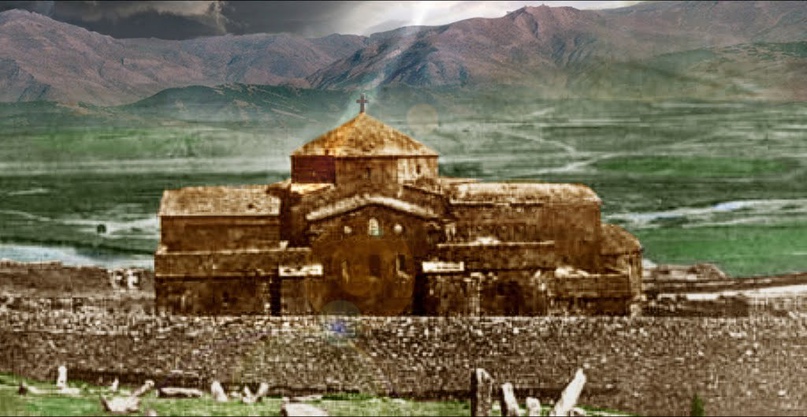 In conclusion, let us mention that the Armenian churches in Baku have really been destroyed over time. Only one of them has been preserved, but not all the churches in the picture were Armenian.