The Letter Was Not Written By Talaat Pasha, But By Hayk Konjoryan

On November 19, a letter written by one of the perpetrators of the Armenian Genocide, Talaat Pasha, addressed to Armenians spread around the Internet. As it turned out from a simple search, it was actually written by another author 5 years ago.

What was written in the letter?

The letter attributed to Talaat Pasha begins with the famous saying, “We wanted to leave behind one Armenian, and only in a museum.” It goes on to say that if Armenians read this letter in the future, it means “we have lost.”

Then the character of the Armenian is analyzed in detail, contrasting it with that of the Turk in terms of cleverness and diplomacy, patience and urgency and other aspects. The letter concludes with the tendency of Armenians to rely on “foreign saviors,” as a result of which “you, who have found yourselves at the broken trough, as has already become a tradition, which they will condemn you to once again in the end.”

In the search engine, searching for one sentence of this letter, one can easily discover that its author is not Talaat Pasha.

It was written by historian Hayk Konjoryan on April 20, before the 100th anniversary of the Genocide. The letter was published on lragir.am: “Letter from the past: Talaat Pasha” At the end of the article, its nature is mentioned – “futuristic.”

In this case, Pasha was a historical-artistic figure to analyze the shortcomings of the Armenian people and the weaknesses of their character. The author’s name and profession are clearly mentioned at the beginning of the article. 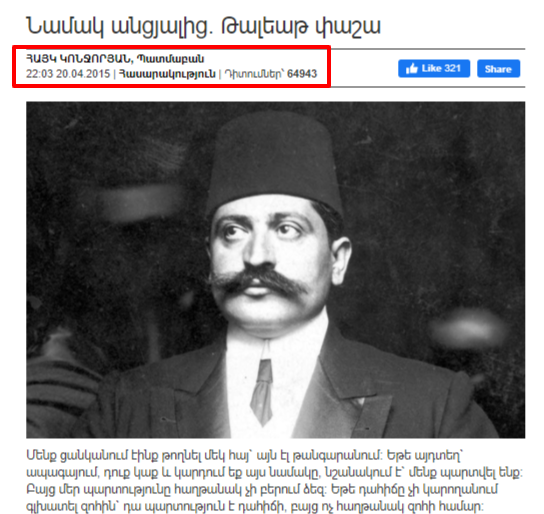 Since 2018, Hayk Konjoryan has been elected as a deputy as a member of the “My Step” faction. Prior to that, he was a member of the council of the “Bright Armenia” party. He has authored materials on the Lragir.am website for several years. He hosted the “In a word” series on Para TV.

Unverified and sensational content was published today by several mushroom websites: armnews365.ru, mediaroom.am, yerevan-times.com, etc. They were shared by individual users and Facebook pages. For example, the material spread on the “One Armenia” page was shared 200 times in 3 hours. 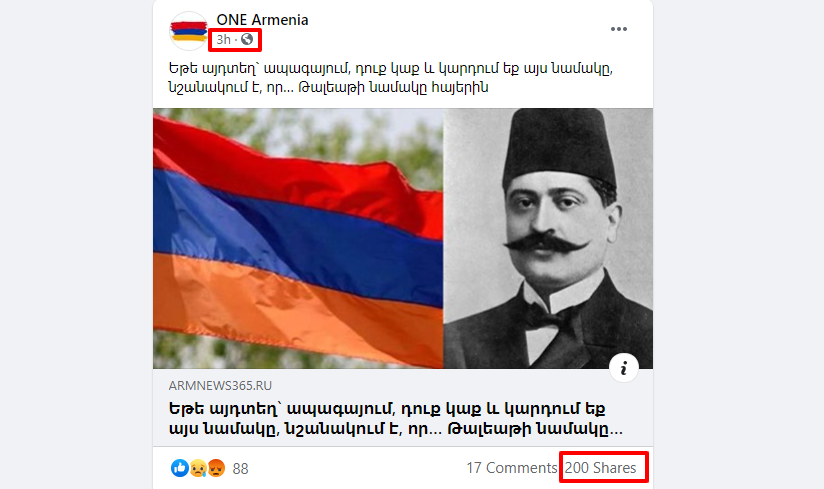 Mushroom websites are not new in the Armenian media field. These are semi-media, semi-entertainment platforms, where there is no contact information or “About us” section. By spreading often misleading news to readers, they create a distorted picture of both the media field and society and political life in general.