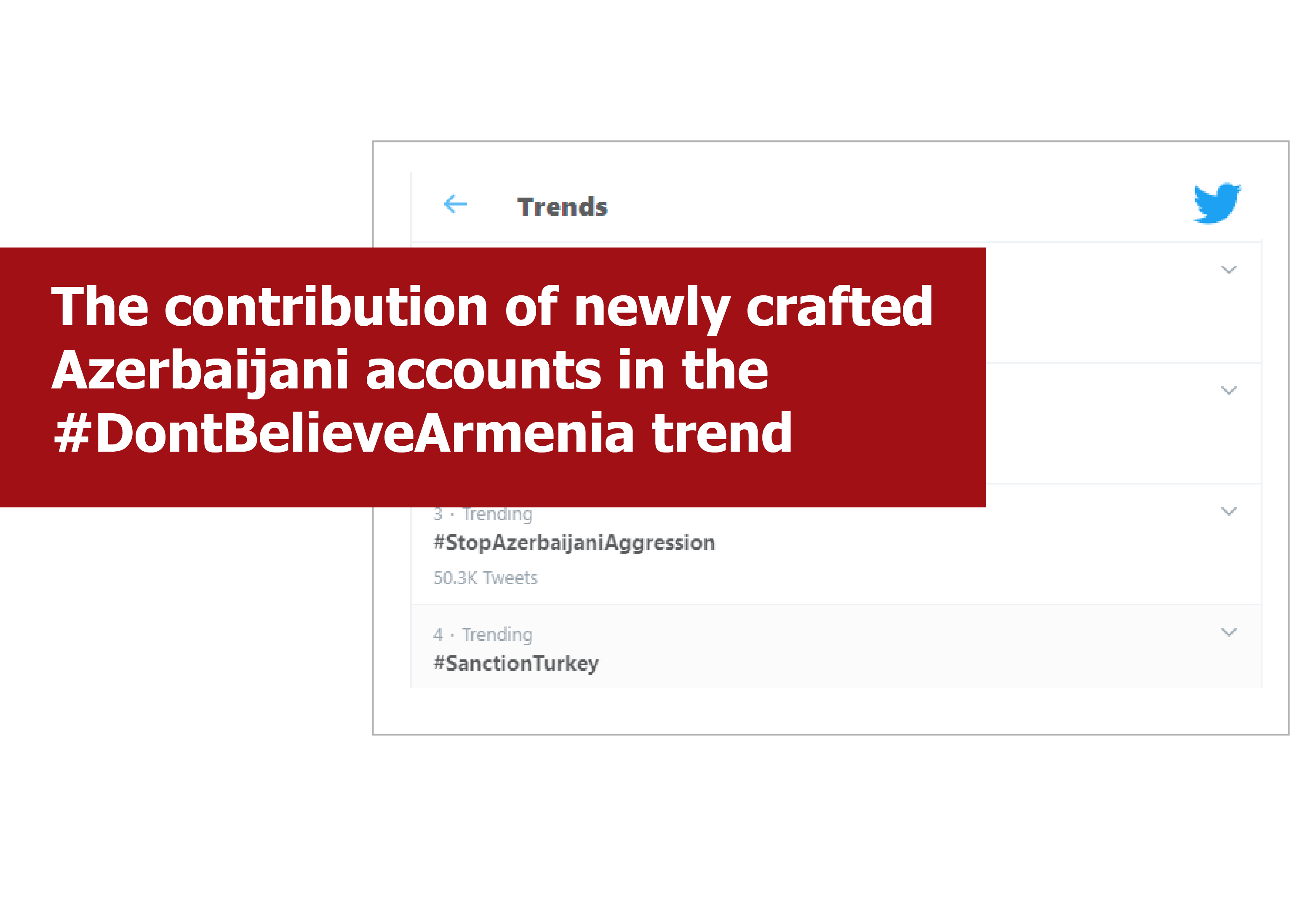 On October 6-7, a new trend appeared on Twitter: #DontBelieveArmenia. This hashtag had been used several times before but had not been during the war which started on September 27.

Under this hashtag, anti-Armenian content is collected including Azeri propaganda, footage from the events in Khojaly. In response to the Azerbaijani call not to believe in Armenia, a new hashtag appeared on Armenian trends on the same day: #FactsAboutAzerbaijan. And this is only one component of the information war.

The hashtag caught the attention of the professional circle in Twitter

Several journalists working on international platforms tweeted about #DontBelieveArmenia. Benjamin Strick, an open-source investigator, collected the hashtag data and wrote that most of the spamming accounts using the hashtag were created on October 4-6.

Zarine Kharazyan from DFRLab wrote that such trends appear in the last week in the case of almost all hashtags related to Armenia and Azerbaijan. Most of the accounts that use them do not seem automated, but there are large Facebook groups that coordinate all this.

@Conspirator0 wrote about the spread of the hashtag #DontBelieveArmenia in a non-automated way, noting that the content attached to it is very repetitive.

The hashtag under the magnifying glass of media.am

Media.am decided to refer to the Azerbaijani trending hashtag and the users who used it. For this purpose, we collected more than 41,000 posts in the first half of October 6 using the hashtag. It turned out that the vast majority of them are English. Other publications are multilingual, from Japanese to Russian.

Only 5 of the posts we collected on October 6 are in Armenian. All 5 are from non-Armenian users. They literally repeated the same sentence: “The Armenian army must leave Azerbaijan. There is no other way to peace.”

We have separated users from this large database, excluding duplicated users. 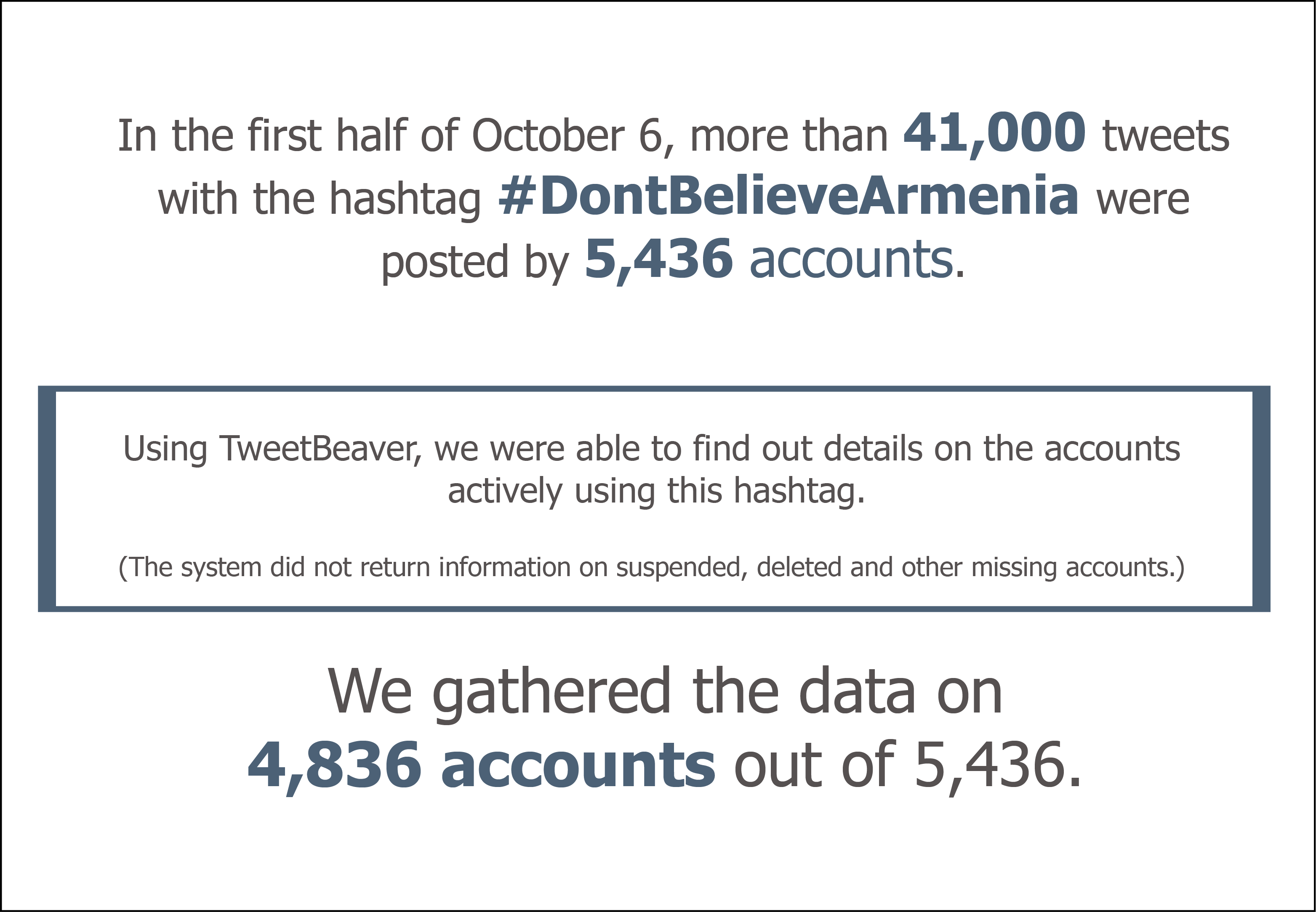 Almost half of the 4,836 accounts were created in 2020. They opened the most in July, during the month of Tavush escalation, and in October, during the Twitter “Do not believe in Armenia” campaign.

Some suspicious accounts used the hashtag

Some Azerbaijani accounts opened in October are behaving strangely, with fewer followers and disproportionately many tweets. Here are some such examples as of October 8 at 2:00 pm. 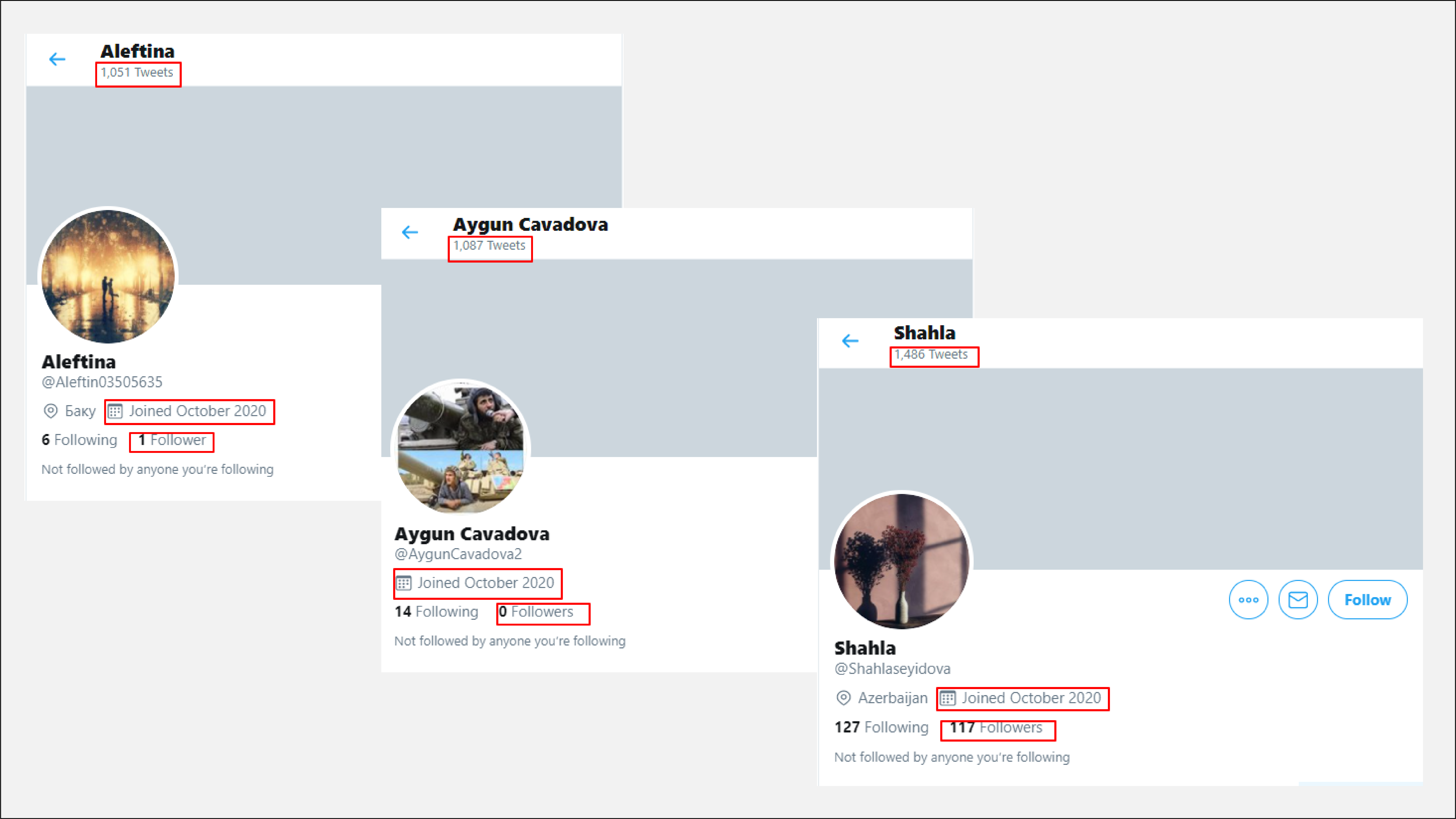 Some users’ account descriptions are worth noting․ In some cases it is a recurring concept: “Karabakh is Azerbaijan!”

Some of the users who most used the hashtag #DontBelieveArmenia were created in July. They also have made disproportionately many tweets. 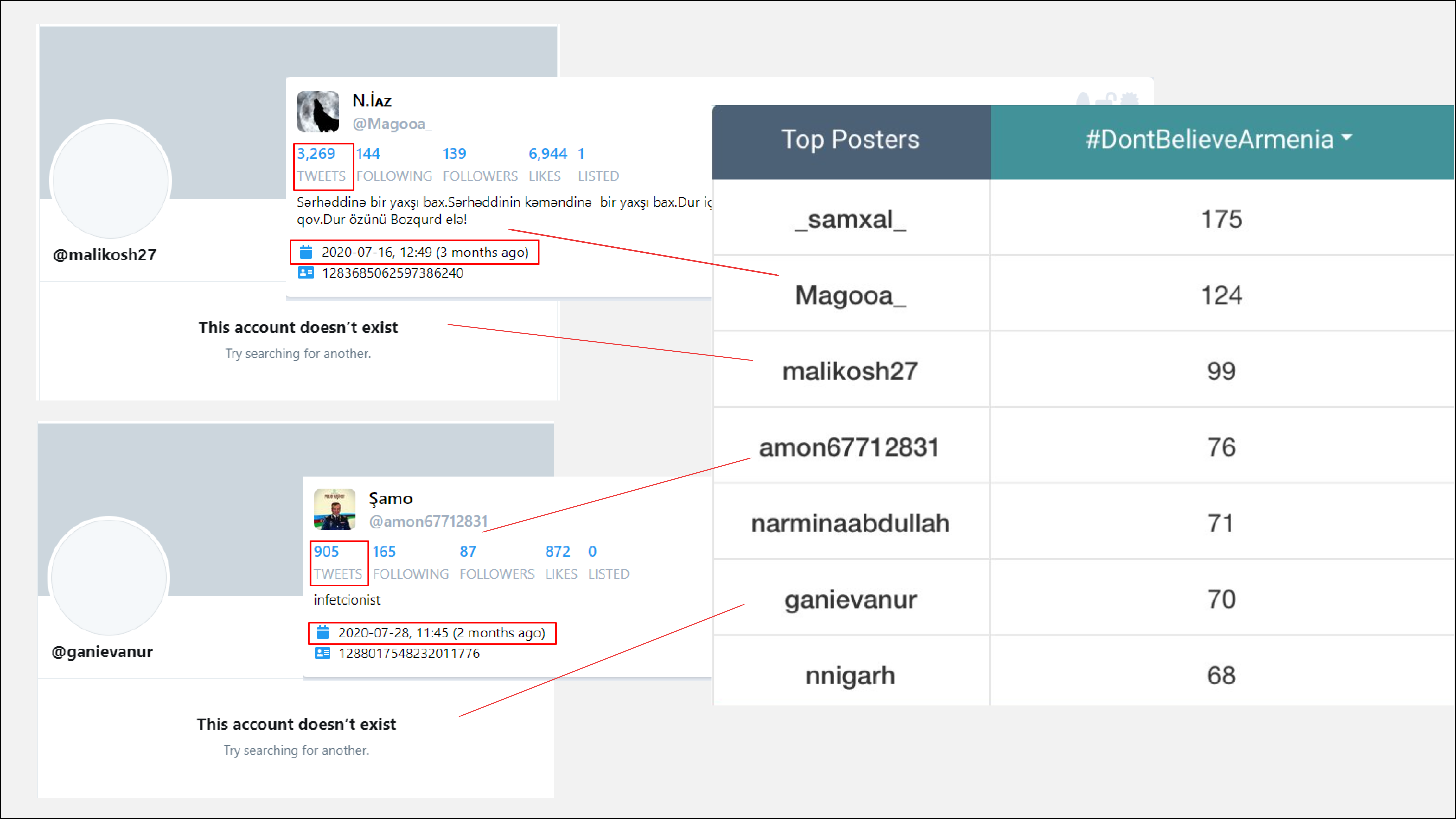 On October 8, the hashtag #DontBelieveArmenia is no longer trending on Twitter in Azerbaijan!

On the first day of the war, September 27, the Minister of Transport, Communication, Communication and High Technologies of Azerbaijan announced that access to the Internet was restricted throughout the country to prevent large-scale provocations in Armenia. Netblocks.org wrote about blocking social networks (including Twitter) and messengers.

Despite the restrictions, Azeris continue to be especially active on Twitter.

“In fact, there are propagandists there who work concretely. Naturally, special conditions will be created for them to post without hindrance,” said Arthur Papyan, an information security specialist. He notes that another factor contributing to the activity of Azerbaijani Twitter is the Azerbaijanis living abroad.

However, as of October 7, the most frequently downloaded programs in Azerbaijan are VPN systems, which allow the changing of IP addresses so they may continue to use banned programs.

The Australian Institute for Strategic Policy conducted a study on the Twitter part of the Armenian-Azerbaijani information war. The study published on October 8 states that the parties are carrying out large-scale, coordinated actions.

The study on the Armenian side states that users target English-language media accounts and US influencers. Turkish-Pakistani accounts support Azerbaijan, Indian ones support Armenia. Find out the details of the report here.