Fake And Denied News Between May 16-31 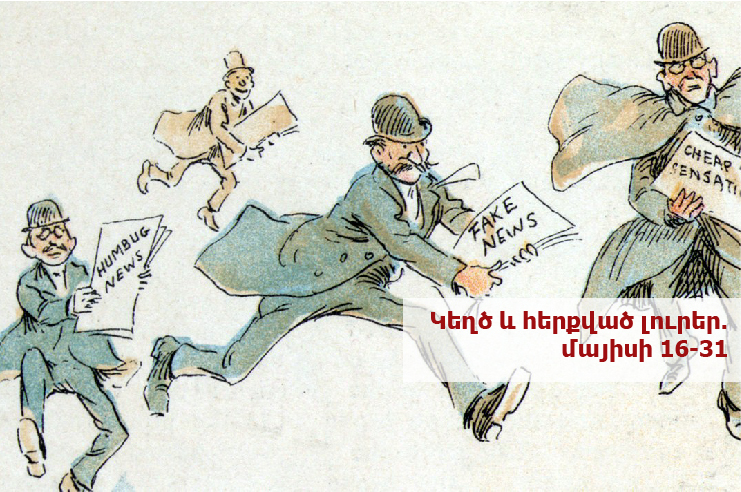 In the second half of May, Prime Minister Nikol Pashinyan had another press conference, making a number of problematic allegations. It turned out that a book about sex was not handed out to children, and the denial of other pieces of misinformation had reached the court.

Is Pashinyan’s grandfather against or for the fascists?

On May 9, Prime Minister Nikol Pashinyan published a photo of his grandfather who participated in the Great Patriotic War. He left his name, birth and death numbers and the data of the regiment he served in the description.

It turned out that there is another person by the name of Nikol Pashinyan on the website Obd-memorial.ru, which summarizes the data of the victims of the Great Patriotic War, the missing and the dead. One of them fought in the USSR army and disappeared (the data is not available now), the other cooperated with Nazi Germany. As a result, the question arose as to who the Prime Minister’s grandfather was. 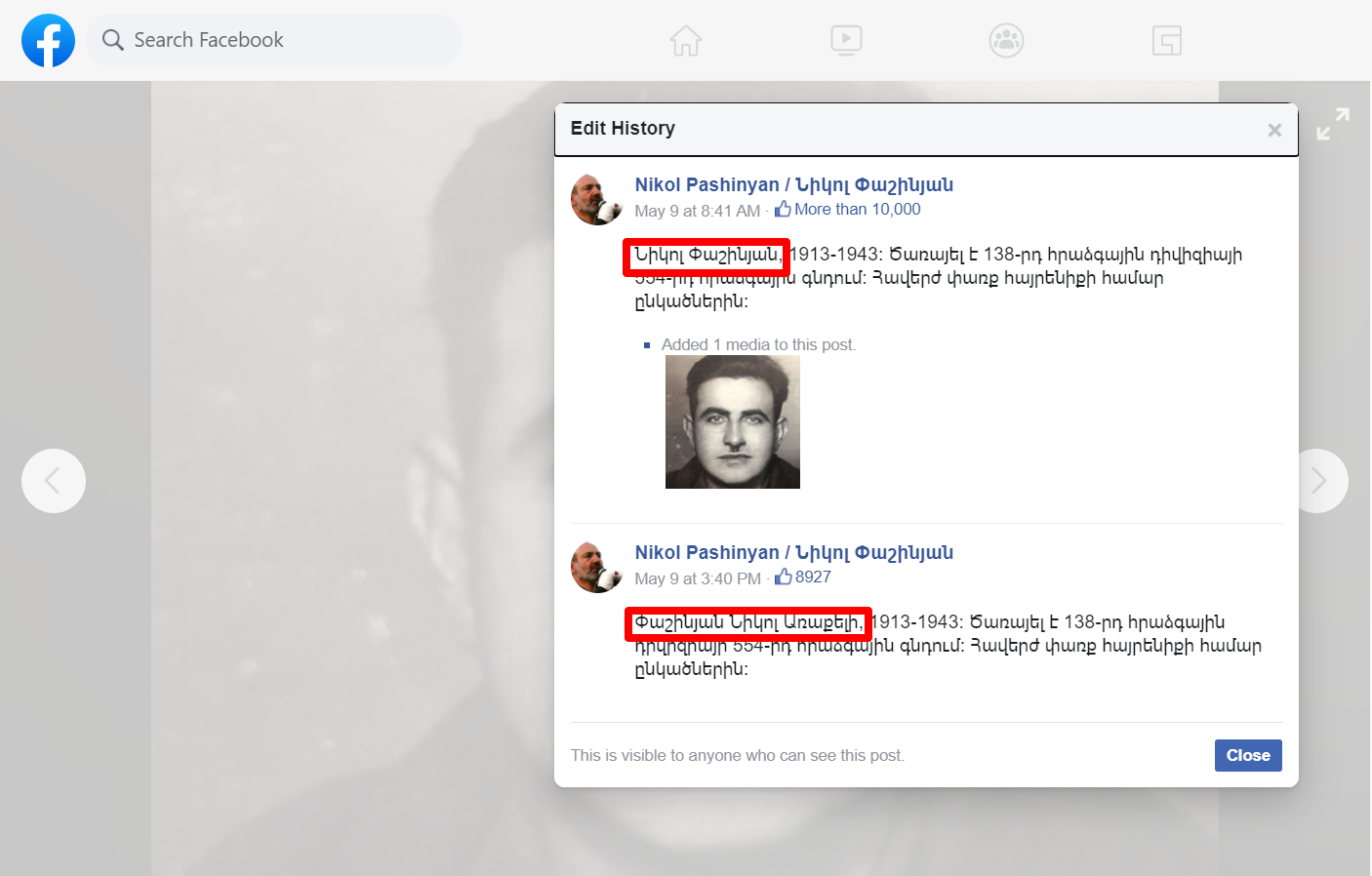 Pashinyan edited his post a few hours later and added his grandfather’s Father’s name, and there were clarifications in the Armenian media. However, Russian websites started writing about the same thing a few days later and raised the question of why Pashinyan is silent. Referring to Info24.ru, this false news was spread by several Azerbaijani websites, including cbc.az, which creates Armenian content.

On May 17, the Russian “Tass” news agency published the denial that Pashinyan’s grandfather had fought against the Red Army. The Prime Minister’s spokeswoman Mane Ghorgyan commented that the spread of such news pursues political goals.

A book about sex was not handed out to children

On May 25, Facebook user David Atanesyan announced that a woman had handed out a “sacrilegious book” entitled “Orgasm for you, or for orgasm for me” to his 9-year-old son and other children on a Vartanants street. Atanesyan had made death threats several times in the video, blaming the “blasphemers” for the incident and linking it to trans people without any grounds.

However, two days later it became known that the news did not correspond to reality. The child confessed to the police that he had found the book and that no one had given it to him.

On May 14, Smbat Gogyan, the head of the Higher Qualification Committee, made a post about his resignation, announcing the reasons for the decision. The day after this publication, alternativ.am spread a news piece with a manipulative title.

The headline states that “Andranik Kocharyan’s son was awarded a scientific degree the day after Smbat Gogyan’s resignation,” but the content says that “the order was signed by Gogyan himself, and the professional commission gave a positive assessment to the work.”

Combining several factors, the website came to a conclusion based on assumptions that there were heated discussions in the NOC regarding the scientific work of the son of the NA deputy Andranik Kocharyan. Without a factual basis, he wrote, “It is not ruled out that Gogyan was pressured to ratify Kocharyan’s work, as a result of which he would be released from compulsory military service. […] And Smbat Gogyan, as a principled person, could not turn a blind eye to what had happened and decided to resign from the post of head of the structure.”

A few days later, Gogyan clarified that the fact that Levon Kocharyan received a degree had nothing to do with his resignation.

The news which was based on assumptions was reprinted by several websites with the same title: 168.am, news.am. Yerevan.today referred to the same material.

Pashinyan’s press conference: Who were the coronaviruses?

Media.am singled out several manipulative statements made in the questions of the journalists and the answers of the Prime Minister. One of them, for example, referred to Pashinyan’s statement during the campaign for the Constitutional Amendments to remove the coronavirus with tweezers and disinfect it with vodka.

Pashinyan spoke about corrupt officials working in the state apparatus, he stated, “The coronavirus is not dangerous, they are the real coronavirus that is still destroying the body of our state system. And we will take out the coronaviruses one by one with a pair of tweezers, disinfect them with homemade vodka and send them on their way.”


This phrase was presented out of context by a number of websites (blognews.am, hayeli.am, YerevanToday). Even after the mention at the press conference, the media continue to spread the phrase out of context, moreover, they also claim that Pashinyan is lying and denying himself.

In the second half of May, two high-ranking officials demanded the denial of the Facebook user and the news outlet.

? On May 14, Minister of Health Arsen Torosyan filed a lawsuit against Nune Avanesyan, former director of Masis Medical Center, demanding a public denial of defamatory information.

The reason for such a demand is Nune Avanesyan’s post on April 25 (who is registered as Nune Nersisyan on Facebook). The latter insisted that she received messages from different people stating that they were offered 100,000 AMD if they would allow that the cause of death of their deceased relatives to be written as coronavirus. In hospitals, there is an order from the Ministry of Health to register anyone with a fever, regardless of the diagnosis, as an infected person.

? Etchmiadzin Municipality demanded that hraparak.am spread a denial for the publication which had “spread obvious lies.”

As noted in the demand, the website, referring to the procurement plan of the municipality for 2020, wrote that they bought the 150 AMD snowdrop flower for 3000 AMD. In fact, the municipality bought 3,000 bouquets worth 150 AMD. The municipality also demanded a refutation, clarifying the issue of other purchases and names used in the publication.

After Mayor Diana Gasparyan’s publication on the misinformation, the website made a correction in the article and changed the title, but did not leave a message about it. Moreover, instead of clarifying and denying, hraparak.am made another publication, describing the misinformation as “in fact, just a result of confusion.”

❌ NSS Director Eduard Martirosyan did not submit an application of resignation.

❌ The Ministry of Emergency Situations informed that there is no reason to claim that a strong earthquake was felt in Armenia. The news, according to the Ministry of Emergency Situations’ Seismic Protection Territorial Service, refers to the May 4 earthquake in the Azerbaijan-Georgia border zone. It was felt in Tavush and Lori regions with a 2-3 point magnitude, about which a message was made in the prescribed manner.

❌ infocheck.am denied the news spread in the press that the Minister of Labor and Social Affairs Zaruhi Batoyan and the head of the Social Service Ani Amirshhadyan are relatives. The website informed that the minister and Amirshadyan got acquainted with the latter only after she was hired.