False And Manipulative News About Armenia: May 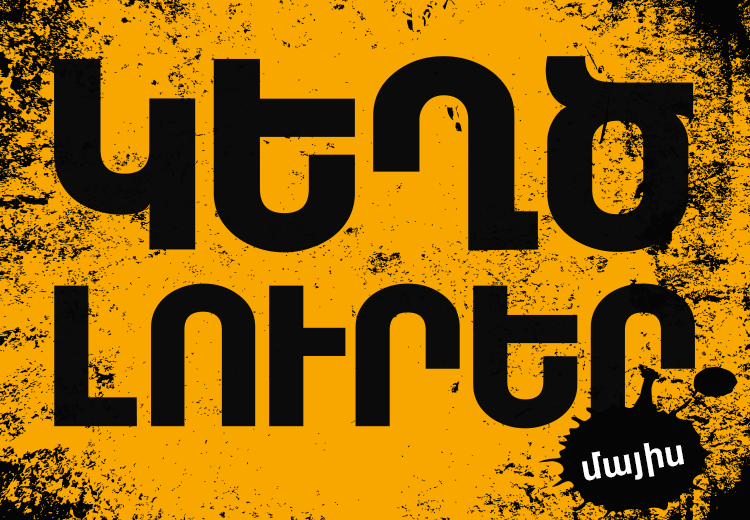 News that was false, manipulative and filled with propaganda related to Armenia were circulated in the post-Soviet region in May. In the Russian media, the Pashinyan family was branded as corrupt and publications about US bio-laboratories continued. With the spread of the coronavirus, the circulation of conspiracy theories and false news about the virus has gained new momentum.

The “terrible” dangers of bio-laboratories

The Kremin continues to worry about the US-funded National Centers for Disease Control and Prevention in several post-Soviet countries.

In May, several Russian websites wrote and reprinted articles on the memorandum of biological security, as well as continued to spread misinformation about laboratories.

Vpoanalytics.com, a website that deals with military-political analysis, wrote about epidemics and biological wars of natural or artificial origin, highlighting the issue of Armenian-Russian military cooperation in this field. At the end of the article, the author emphasized, “In our view, it is inexpedient to postpone the signing of a memorandum between the two countries on biological security in order to eliminate possible problems and misunderstandings in this area.”

Last year, Russian Foreign Minister Sergei Lavrov said that the issue of the memorandum was being discussed in order to ensure the access of Russian specialists to the laboratories operating in Armenia since 2014. However, as reported by the Armenian Foreign Ministry in May, this process has slowed down due to the declaration of a state of emergency as a result of the epidemic. Moreover, the spokesman for the ministry stressed that the memorandum of understanding is not about the right of access to the biological laboratories, especially for Russian specialists, but that it “addresses a wide range of issues related to ensuring the biological security of the parties.”

Fondsk.ru made the baseless claim that the virus started spreading in Armenia on March 22 after 14 employees of the bio-laboratory were infected. However, according to the data presented by the National Center for Disease Control and Prevention, the number of COVID-19 carriers in Armenia had increased over ten times more than that even before then, starting March 16. 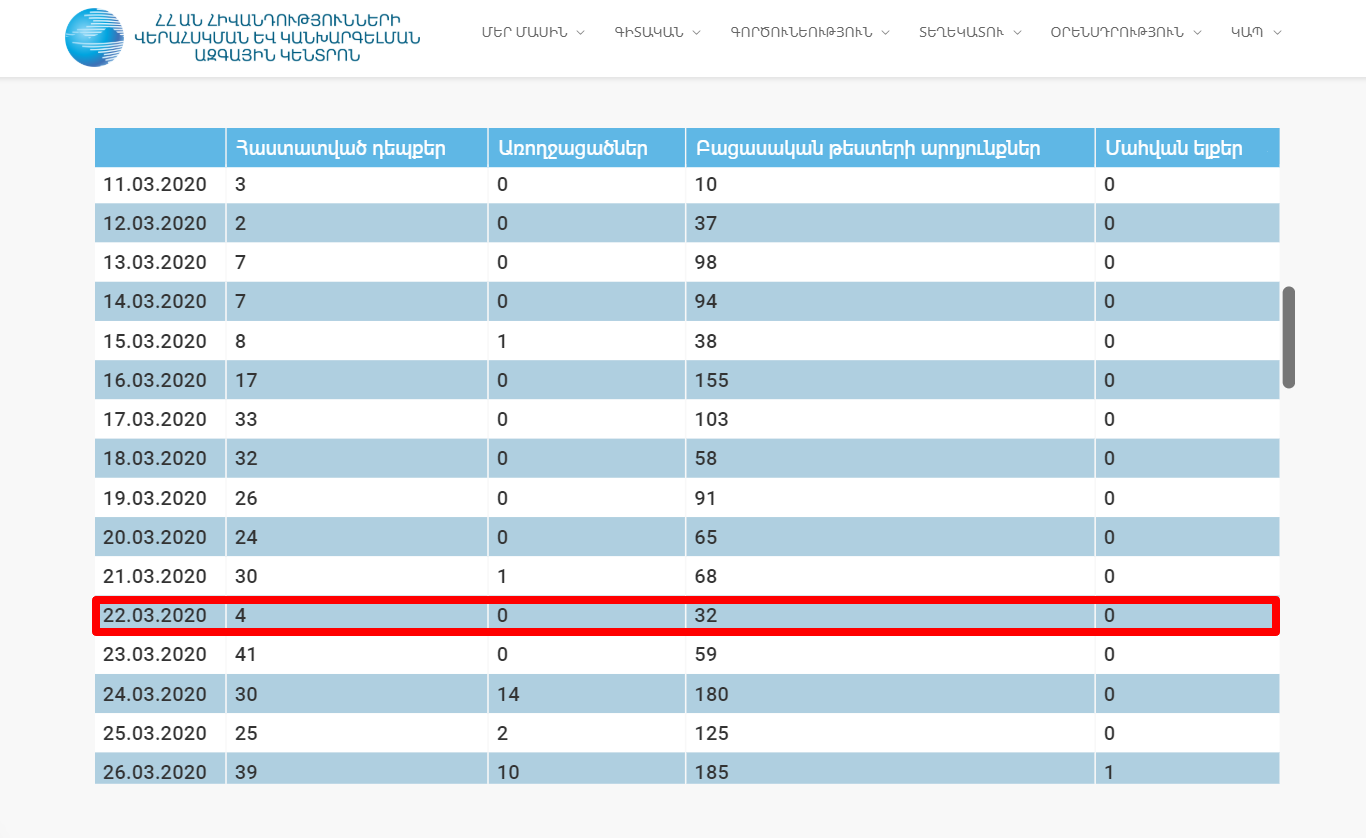 Another version of the biological weapon theory appeared on cont.ws. The website presented a video posted on YouTube by Yevgeny Mikhailov, an independent journalist, in which he translated an Azeri video published in ednews.net into Russian.

The article, citing “independent sources,” states that viruses are being developed in Armenian bio-laboratories, which can affect specific ethnic groups in Turkey, the North Caucasus and Azerbaijan. And it is assumed that possible epidemiological attacks are being prepared in those areas.

Bio laboratories: The Armenian response to the Russian propaganda

These propaganda theories about bio-laboratories penetrated Armenia in the form of information propaganda and even action.

First, on April 28, the “No to American Virus Laboratories” page was created on Facebook. The first publication about its goals, in fact, summed up the propaganda theories about the center. The authors call it “Biological Virus Laboratories Implemented by Soros Policy.” It claims that the new Armenian authorities have a financial interest in the activities of the laboratory. Instead, they cause health and diplomatic problems in Armenian-Russian relations.

This was followed by a rally of several people in front of the government building on May 7, led by Sevak Martirosyan, who said that there was a hypothesis that biological weapons were being produced there against Russia, Iran and China. Media.am referred to the participants of the action, their claims, the activities of the bio-laboratories and the Russian propaganda.

News-front.info touched upon the open letter of “Armenian Eagles, United Armenia.” The authors demanded that the Prime Minister of Armenia close these laboratories within two months, which, according to them, are dangerous for the health of citizens and the preservation of the Armenian genetic code.

Conspiracy theories about the coronavirus have appeared on Facebook’s Armenian domain, mostly from Russian-language sources. For example, Karen Vardanyan, the executive director of the Union of Advanced Technology Enterprises, regularly posts such Russian-language content on his page.

While browsing his page, we can find the label left by Facebook that those who checked the content considered the facts to be false or partly false. 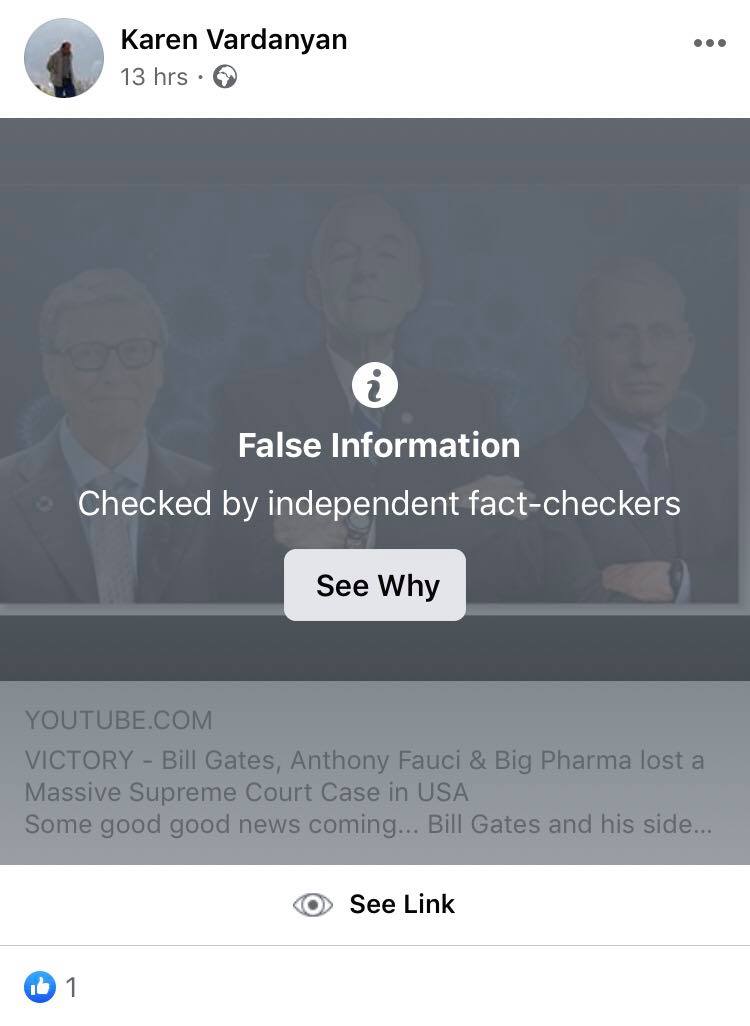 🔻 The latter shared on his page an episode from a series of broadcasts by Russian pro-Kremlin director Nikita Mikhalkov on the “Россия 24” TV channel, who in turn insisted that Bill Gates would chip people via a vaccine. Its purpose is to control people and reduce the population. The theory of this conspiracy has been spread by several Armenian websites: hayeli.am, analitik.am.

🔻 Karen Vardanyan circulated the already refuted news, according to which “Bill Gates is being tried in India for throwing a paralyzer in with the vaccines of 400 thousand children.” This news was also reported by the First Channel of Russia, and it was said by “Dozhd” that it was a conspiracy theory during the online TV program, “Fake News.”

🔻 A number of Armenian websites (style.news.am, armeniasputnik.am) published the interview given to sobesednik.ru by the Russian singer Soso Pavliashvili. The latter expressed the opinion that the coronavirus was created artificially in order to leave people without a connection with God. The creators, of course, are the secret leaders of the world, the goal is to reduce the population.

On April 27, the Russian Telegram channel Бойлерная wrote that a batch of 40 tons of smuggled cigarettes with Armenian excise tax had been seized at Krasnodar airport. According to the publication, the transit plane belonged to the RA Ministry of Emergency Situations. Later, the Ministry of Emergency Situations responded by announcing that the ministry did not have a plane.

The news reached Armenian websites two days later. On the same day, Arthur Danielyan, the founder of the Adekvad NGO and a former member of the Civil Contract party, wrote about the involvement of Nikol Pashinyan’s cousin Hrachya Hakobyan in this smuggling case. Mikael Minasyan, the former ambassador of the Republic of Armenia to the Vatican and the son-in-law of the third president of the Republic of Armenia, came to confirm and expand upon this thesis later with his “The End of Lies” vlog.

Hrachya Hakobyan denied the rumors circulating about him, describing them as lies, and Anna Hakobyan’s spokesperson described the accusations voiced by Minasyan as a “delusion.” The “fact-checking platform” found out that the company producing and transporting the cigarettes in question belongs to former officials.

Touching upon the involvement of his nephew with the cigarette smuggling case, Prime Minister Pashinyan told a news conference on May 16, “I am aware that Hrachyan has filed a lawsuit, and it won’t be me who will answer that question, rather all of us will publicly see what is right and what is wrong.”

A few weeks after these publications about smuggling, the news of a second batch came to light. On May 18, the EADaily.com website wrote that another consignment of smuggled cigarettes from Armenia was found at the airport in the city of Voronezh. A few hours after the news was published, it was spread on Armenian websites. In the evening, Serzh Sargsyan’s son-in-law Mikael Minasyan touched upon the topic, making a number of false statements. Media.am touched upon the sources and trail of the news.

The topic did not end there. On May 20, the tobacco mix-up was followed by moscow-post.su’s “Armenia’s main laundress” material. According to the publication, Pashinyan’s family, led by Anna Hakobyan, has formed a corruption scheme, through which the money received from the foundations founded by Hakobyan goes to the Prime Minister’s family budget. The article was translated by hayeli.am, and the Russian version was posted by 168.am. This material also appeared on several Azerbaijani websites: disput.az, haqqin.az.

What news came to Russia from the Armenian media?

The news wasn’t shared one-sidedly, some information/opinions/analyzes were reaching Russian websites from Armenia.

🔻 On May 8, the analysis of the constitutional amendments of “Голос Армении” appeared on the website of the “Красная Весна” agency. The author of the article insisted that the commission was set up to turn a blind eye. “It is designed to impress upon the politicized society that Nikol seeks to change Serzh Sargsyan’s Constitution.”

Moreover, the author of the article, Gaspar Adamyan, noted that the last eight sittings of the commission had raised suspicions that the members did not know what to do without Pashinyan’s instructions.

The “Красная Весна” website, in general, very actively covers the topic of Constitutional amendments and the fate of the Constitutional Court. In May alone, the site ran about a dozen publications.

🔻 A post made by Ara Vardanyan, former head of the Hayastan All-Armenian Fund and a member of the current opposition Adeqvad NGO, regarding the same topic, appeared on this website.

Vardanyan, who is accused of making bets on online casinos using the foundation’s funds, wrote that “We should not expect a harsh assessment from the various structures of the European Union” to get rid of the majority of the members of the Constitutional Court in any way, “because our government has already avoided that assessment by ratifying the well-known convention and removing the word ‘genocide’ from the EU lexicon.”

🔻 The same website also touched upon Serzh Sargsyan’s son-in-law Mikael Minasyan’s “The End of Lies” broadcast on May 15. They also posted PAP MP Gevorg Petrosyan’s post: “A referendum isn’t an engagement party that you can cancel … See if you can get out from under it as easily as you appointed it (can you)…?