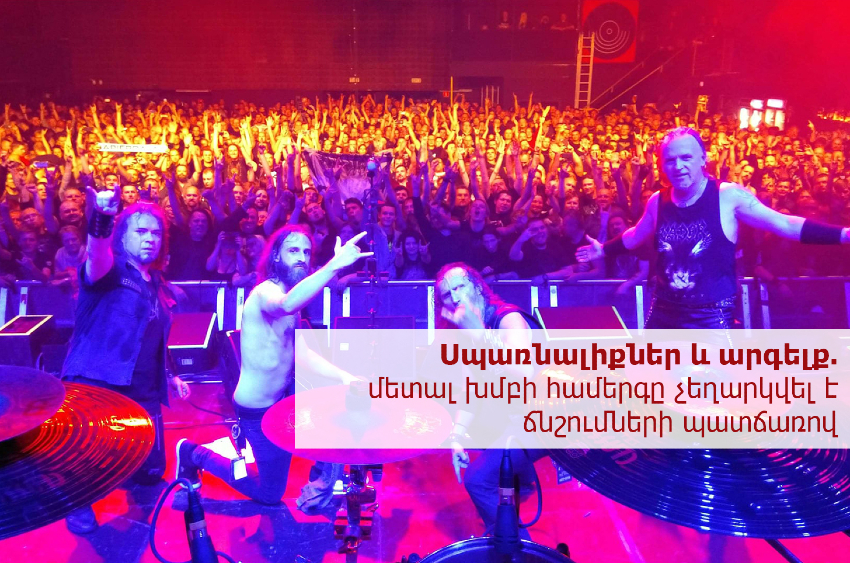 Yesterday it became known that the Puppet Theater refused to provide its hall for the Polish band, Vader. The decision came amid public pressure, triggered by a religious activist living in the United States. A former member of the council opposed the concert, which was linked to the Soros Foundation.

The cancellation of the concert was criticized by Serj Tankian and Tigran Hamasyan.

On October 2, Los Angeles-based religious activist Armen Hareyan criticized the performance of the death metal band Vader at Yerevan Puppet Theater on his Facebook page. Hareyan’s post was shared by about 250 Facebook users on their walls. The religious activist’s Facebook page has about 20,000 followers. He was the one who organized the “United Prayer Against the Istanbul Convention” Facebook event.

The Kamk Initiative was founded by Vahagn Chakhalyan, who became well-known in 2009 when he was sentenced to 10 years in Georgia on charges of possession of illegal weapons, hooliganism, mass riots and resisting police.

There weren’t too many posts on the Kamk Initiative page about Vader’s concert and only on October 3 did they share an article published on a mushroom website.

A member of the Bright Armenia faction, Anna Kostanyan, also criticized the concert, but later deleted her post (Media.am has a screenshot).

MP Tatevik Gasparyan (“My Step”) also responded to the topic in Facebook comments. A few weeks ago PAP MP Arman Abovyan criticized “Satanism.” In this case, the reason was the publication of Analitik.am website about an event organized by students at the Conservatory.

The Puppet Theater canceled the concert. The Theater received threats regarding the concert

Speaking to Media.am, Art Director of the Puppet Theater Ruben Babayan noted that “there have been many threats.” He said, “It was very likely that the concert just wouldn’t have taken place because we have a very dark-thinking, aggressive segment of society that is getting more and more aggressive.”

Although many rock concerts, including those of the death metal genre, have been taking place for many years at the Puppet Theater, this is the first time such a wave of discontent has emerged.

Babayan also linked the wave of discontent with his being a member of the board of directors of the Open Society Foundation.

According to him, there is a massive attack against the foundation and as a result, the Puppet Theater is not the only one being targeted. “The incident that took place two weeks ago at the Conservatory, these latest pressures on simply people, [the foundation’s] office workers…”

He also added that the Puppet Theater has never received a grant from the foundation. “This is only related to my person, and I think they achieved their goal. My person is now perceived negatively from all sides.”

Vader’s performance in Yerevan was organized by Zhesht Events, which has been organizing concerts and festivals in Armenia for the past 10 years. Zhesht Events has issued a cancellation notice, describing the case as censorship.

“Armenia is a secular country where citizens have the right to listen to the music they want. In Armenia, music groups and artists of all genres must be creative, with the freedom to create, without fear of being censored. Such precedents cause big financial losses for the organizers and create a bad impression of Armenia for foreign show business representatives. It is also noted in the announcement by the organization that “the concert will take place at all costs.”

Users sharing the view of the organization started posting on Facebook with the hashtag #StandForMusic. The concert was supported by Serj Tankian and Tigran Hamasyan.

Interestingly, the hashtag #StandForMusic is also used by those criticizing the concert, to make their point of view heard.

An overview of demonic images in art

The wide audience in Armenia is familiar with metal music, for example, by System of a Down. This genre is very diverse. Its types are death metal, which has different aesthetics – dark colors, skeletons, hellish images, and more.

This does not mean that people who play death metal must be filled with hatred and evil. But because of this unique aesthetic, metal has gained a scandalous reputation.

For example, in 1985, the wives of several American politicians spoke out against metal music, and the question of the “morality” of metal bands was even debated in the US Congress.

P.S. On October 4, it was announced that the concert of the band Vader will take place at Poligraf Club at 9:00 p.m.