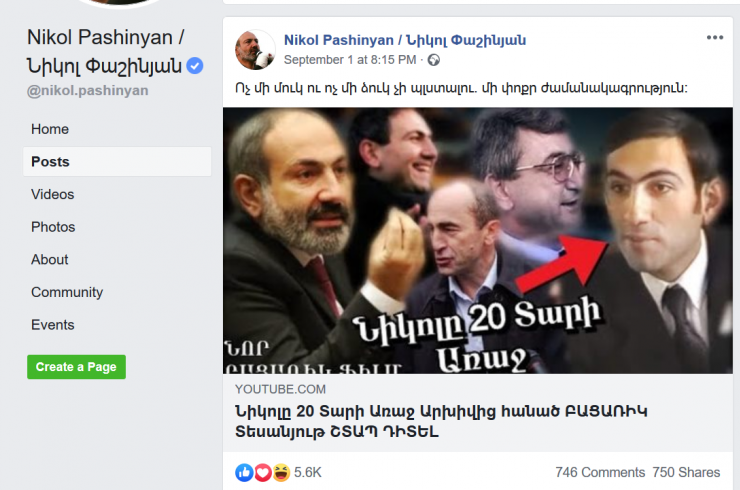 Prime Minister Nikol Pashinyan has posted on his Facebook page a video entitled “Nikol’s Righteous and Strong Struggle (the beginning was removed at the request of” A1+”) EXCLUSIVE Video WATCH IMMEDIATELY.”

The video spread by the Prime Minister was published by a YouTube channel called Perfect TV. Hraparak writes in this article about Nikol Pashinyan’s post calling Perfect TV fake. The Infocheck project of the Center for Public Relations and Information of the RA Prime Minister’s Office wrote that Perfect TV is not a fake.

Technically Infocheck is right. The channel Perfect TV is run by a real person, that real person is making real money on his channel through YouTube. Perfect TV has submitted the required documents to Google for the money, and now it has a verified YouTube channel with almost 210,000 subscribers.

A verified symbol does not mean that a YouTube channel can’t have problems. A moderator uses videos from news sites to create videos, and if a copyright complaint is filed against the channel, it may be blocked.

Perfect TV has already voluntarily rejected a piece of the video spread by Pashinyan at the request of A1+. The video also features footage of Radio Liberty and Civilnet.

In general, Perfect TV’s host is trying to approach copyright issues by using photos for his text videos (of course, the photos are also copyrighted) and live-streamed videos on Facebook.

The Prime Minister suggested to his half-million-strong audience on Facebook that this Perfect TV video could be watched, “There are no games, it’s just a little chronology.” He refers to a piece of Pashinyan’s speech at the 2018 Yerevan City Council election campaign where he mentions mice and fish. It is not clear what kind of chronology was presented in the video liked by the Prime Minister. But it is certain that if Pashinyan wished he could find and distribute a real news channel that summarized his previous speech or the chronicle of his journey.

Facebook continues to be an important media tool for Pashinyan. The former journalist prime minister is distributing content from a YouTube channel created to make money with sensational headlines and content, on his most important platform.

If Nikol Pashinyan and his social media manager(s) were to check Perfect TV, they would see videos, for example, entitled “Nikol Pinned Putin Against A Wall: There Is No Salvation For Kocharyan” or “The Terrible Overthrow of Nikol’s Game: Kocharyan is Getting Stronger: Urgently Share.”

When a person publishes material on social media (without any explanations for why they are disseminating that material), he or she vouches for the creator. The materials we distribute characterize us, which talks about our priorities and interests.

It is desirable for the Prime Minister to be particularly attentive to the sources of information that he is distributing. In this case, the Prime Minister has spread a video with the headline “SPREAD QUICKLY.” One of the other rules of media literacy is that a media product that includes a call to URGENTLY DISSEMINATE or SPREAD QUICKLY BEFORE IT GETS DELETED, in their title can’t be trusted.

Nikol Pashinyan was once running his own Facebook page. It is not known how much time he is spending on this work at this time. Whoever runs the Prime Minister’s Facebook page after this Perfect TV event can be told the classic saying, “Don’t do it, just don’t do it.”