What News Circulated And Was Refuted Between July 15-31 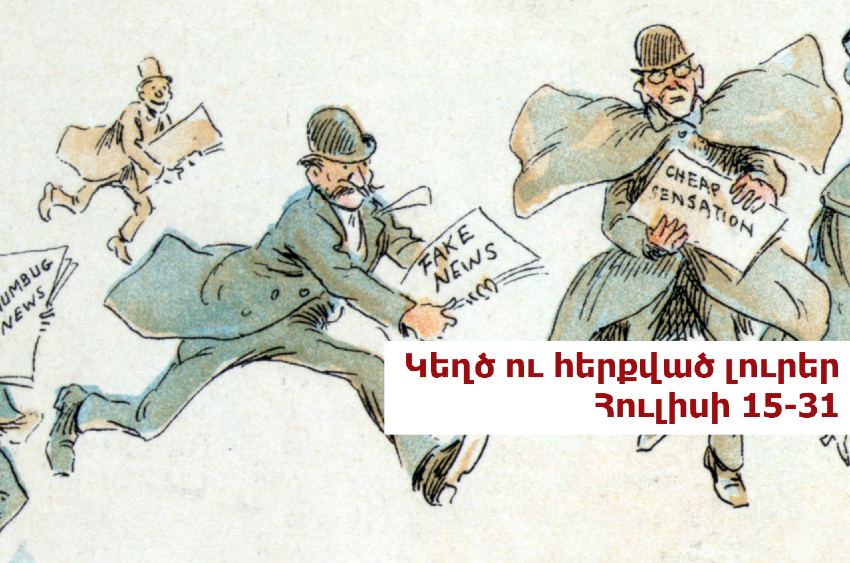 On July 15-31 a post from a fake Facebook page became an opportunity for news, a series of false rumors spread about Nikol Pashinyan. The traditional LGBT topic was also included in this manipulative information.

H1 did not make changes to the broadcasting plan

On July 16, Media Defender’s Initiative released information that Public Television of Armenia has changed its broadcasting list, delaying the broadcast of the football match to air its interview with Anna Hakobyan. The publication was also accompanied by the assumption that “football fans felt cheated.”

Petros Ghazaryan, the director of H1’s news and analytics program, denied the information, noting that Public TV had no obligation to broadcast the game live and did not make any changes to the ether plan.

On July 20, a number of websites reported that the “My Step” alliance is conducting a Facebook survey to find out how much citizens are willing to pay for transportation.

The news of the poll was false; the media did not mention that the page was not related to the “My Step” alliance, it was an unofficial page. The Former Deputy Director of Public Radio, a member of the Quartet Media team, and Lika Tumanyan, a member of the Adekvat Party initiative group, also spread the false information.

Referring to the Facebook page called “MY STEP” spreading the poll, Deputy Chief of Staff of the NA Lilit Minasyan noted, “Since September we’ve been trying to negotiate with the page’s user to change the page’s name or at least add that it spreads unofficial information, but Arman Hambardzumyan (the site’s administrator) disagreed and continues to form a misconception among the public [ …].”

Media.am has covered this story in detail and outlined some tips for distinguishing real and fake Facebook pages.

The farmer has called for a lawsuit if slander is found in his statements.

On July 25, the State Food Security Service issued a denial, noting that the farmer is spreading misinformation. None of the numbers mentioned by the farmer were true; Only 1.3% of the animals tested in Vayots Dzor were found to have the disease, and in the village of Karaglukh only three people who were members of the same family became ill.

On July 23, the website irates.am reported that Prime Minister Nikol Pashinyan went to Ijevan by helicopter for his childhood friend’s birthday.

The news was similarly reprinted by news.am, yerevan.today, politik.am and a number of other media, but it was false. The Prime Minister’s Office of Information and Public Affairs demanded that the misinformation be denied, and on July 31, irates.am released the denial.

Nikol Pashinyan also referred to the information on his Facebook page, accusing a number of media outlets in receiving support from the former authorities.

Vladimir Karapetyan has no restaurants in Tbilisi and Yerevan

The same irates.am site wrote on July 26 that Nikol Pashinyan’s press secretary Vladimir Karapetyan has restaurants in Tbilisi and Yerevan. Karapetyan denied the information and demanded that the denial be published on irates.am, which was done on the same day.

The news was also published by armeniasputnik.am, aysor.am, armdaily.am and a number of other sites.

Pashinyan did not sign an order of dismissal during his vacation

The website asekose.am wrote that “Nikol Pashinyan has dismissed a famous deputy governor while on vacation.”

The news is not true. This was reported by infocheck.am, noting that the order of dismissal was made by Deputy Prime Minister Tigran Avinyan, who assumed his duties while Pashinyan was on vacation.

There is no third sex department

168 Zham has accused Minister of Labor and Social Affairs Zaruhi Batoyan of hiding structural changes at the ministry. The newspaper, based on anonymous documents, claims that the minister has “stealthily squeezed in an Armenian third sex department.” The paper also argues that the department will protect the rights of homosexuals.

Both the title of the “third sex department” and the allegations regarding homosexuals have been presented by the newspaper in the form of assumptions without justification or evidence.

The ministry has denied the news, calling it an “absolute lie.” It is also noted that the term “third sex administration” has no legal formulation and is “the consequence of the author’s imagination.”

Homosexuality in the Armenian press is constantly becoming a subject of manipulation.

No police guards were installed near Pashinyan’s father’s house

On July 25, Zhamanak daily reported that a police post had been installed near Nikol Pashinyan’s father’s house.

The police denied the information on the same day. A number of news outlets had published hints about the news being false. Of these, hraparak.am added to the police refutation that “It is not ruled out that they may be plainclothes policemen and the guard may not be officially registered.” The newspaper did not provide any evidence to support this assumption.