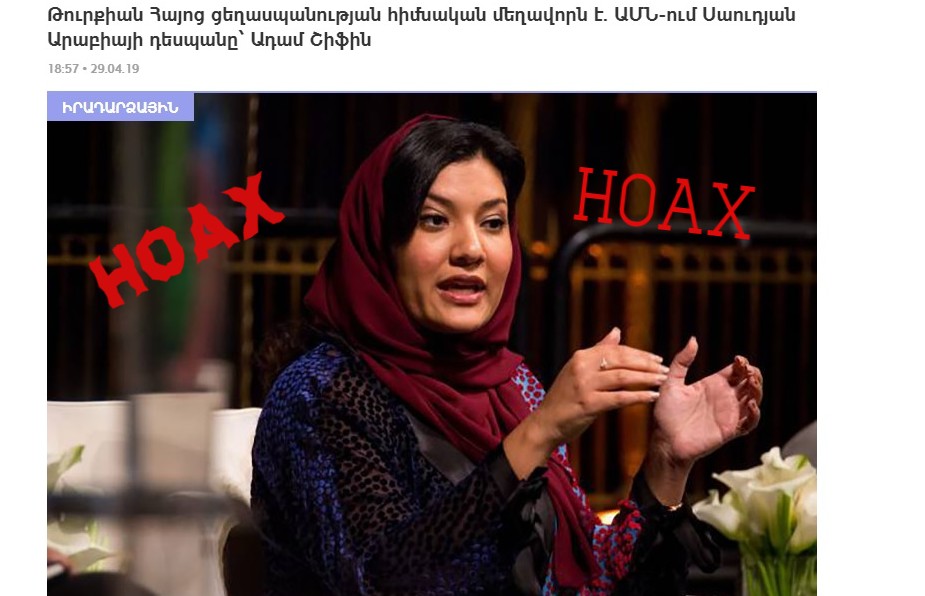 The news, that during a meeting with Congressman Adam Schiff, Saudi Ambassador to the United States, Reema bint Bandar Al Saud promised to finance the adoption of a resolution recognizing the Armenian Genocide in Congress, is fake.

Adamcshiff.com has spread a press release with such fake information. This fake and now inaccessible website was registered two days before the release of the message on April 24. It’s address differed from Adam Schiff’s real address /adamschiff.com/ by switching the order of one character. However, many media outlets bit the bait of this website with a misleading name.

BuzzFeed News had published an article on the creation and circulation of this false news article on April 30. The site investigated the case and concluded that the fake message was actually created in Russia. That’s how BuzzFeed’s article was titled.

Writer Jane Lytvynenko writes that the fake site registration data was not available, but accessible information could allow them to understand who created it.

Justifying the conclusion that fake information was created in Russia, BuzzFeed News writes that the fake post was posted by the blog pravosudija.net. Then, the text was sent by email to Russian media on behalf of Sofiya Vars, the author of the translation. Such an email was also received by them.

The translation is still available at pravosudija.net.

BuzzFeed News writes that the press release was written in unnatural and grammatically incorrect English. Meanwhile, these linguistic problems are not observed in the Russian text.

The website reminds that this is not the first case when English-language site’s fake information was quickly translated into Russian and posted on the same pravosudija.net blog. They wrote about such cases two years ago when the same blog was the first place for Russian translations of fake sites, which presented supposed news from The Guardian, The London Times, and Al Jazeera.

BuzzFeed News also quoted Adam Schiff’s statement that foreigners are probably behind the spreading of this false information.

Fake news on the Armenian domain

The website Yerkir Media wrote about the fake news on April 30, asking for readers’ forgiveness. The website aravot.am also wrote about it, however, did not apologize for spreading false information, but simply removed it from the website. The title of the published material can be found using Google, with a link that now leads to a different material.

The Armenian Service of Radio Liberty also spread this false information. They also removed the published news from their website and on May 1, published an apology to their readers. The website writes, “The fake press release attributed to Democratic Congressman Adam Schiff misled many Armenian, Arab, and Russian media outlets, including Radio Liberty RFE/RL.”

RFE/RL apologized to its readers and promised to “be more strict about the process of verification in order to rule out such errors from now on.”

Although the news about the press release being fake has already been disseminated, articles published in some Armenian media are still available in their original form without being denied.

Armtimes.com wrote about the news, referring to Suren Sargsyan’s Facebook post, which has already been removed from Facebook. Tert.am cites Armpress, which refers to Schiff’s fake official website. The Russian-language arminfo.info agency and verelq.am also cite the same site.

And the source of the material on ankakh.com was  rusarminfo.ru, which, in its turn, wrote about how the news was created by an Azerbaijani news website. By the way, the false news has become the reason for a large-scale critical-analytical material from the Azerbaijani website minval.az.