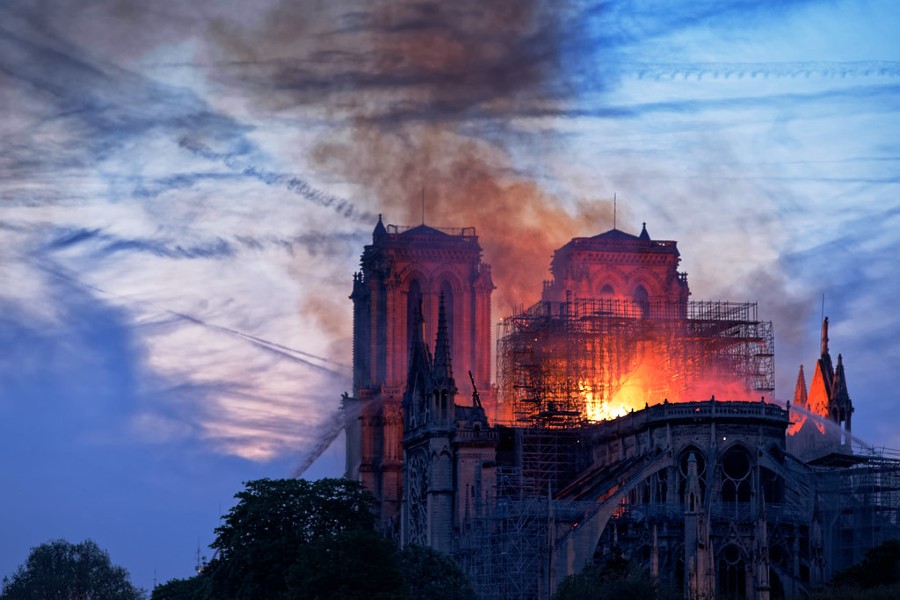 A fire broke out on April 15 at the Cathedral of Notre Dame in Paris. The fire which burned for 7 hours damaged the cathedral’s roof, devouring the bell tower.

The incident was shocking and became the topic of global discussion.

US President Trump described it saying, “It was burning at a level that you rarely see a fire burn.” “ I’m sad tonight to see this part of us burn,” said French President Emmanuel Macron.

The official cause of the fire is not yet known, but there is a hypothesis that it was the result of recent restorative work.

Paris prosecutor Remy Heitz told CNN that the fire was probably accidental, “Nothing suggests that it was an intentional act.”

However, everything did not end here either in Armenia or abroad. A whole bunch of fire conspiracy theories spread through social networks.

Before revealing conspiracy theories in the Armenian community of Facebook, first a look at the opinion of a Facebook user, Aspram Hayrapetyan, “Either the Cathedral of Notre Dame…Imbeciles, it is completely decorated with sculptures and carvings of demons…  And you’re still surprised and weeping…”

Another user, pained that they are not able to extinguish the fire, writes, “ Perhaps it’s a sign, not that Christianity needs to burn down, but that it should burn brightly in everyone’ heart.”

These are probably innocent thoughts in comparison with discoveries of complicated and intricate connections, energies and punishments.

The user named Vigilant Citizen makes a “vigilant” post, “Authorities did not use air aviation capabilities… why?… It can be assumed that it was deliberate, with the inexplicable working style of the French firefighters, one example of which can be viewed in the video footage.”

In the video there is a burning car on a city street, firefighters are putting out the fire, and you can hear a conversation in French from those taking the video.

Some users started discussing the “response step” option. Supposedly, the response, in this case, was to the attack on the two mosques in New Zealand in March, which had anti-Islamic and anti-immigrant motives.

Conspiracy Theory N3: this is the work of Turks

The most common conspiracy theory among Armenian Facebook users was the Turkish trail.

Artak Tadevosyan, a reporter for the AYP FM-99.5 radio station in an interview with iravunk.com talks about the possible causes of the fire. “There is an opinion that this was a counterattack on Macron for the proclamation of April 24 as the Day of Remembrance of the Genocide Victims.”

A user by the name Tatevik Stepanyan posted a screenshot of Radio Liberty’s live broadcast comments section, which read “If this is really what Turks did on the occasion of the Genocide, then we, Armenians, are indebted to France,” or “Erdogan’s ears can be obviously seen here.”

Armenian users also reminded that on April 22, a liturgy was to be held in commemoration of the victims of the Armenian Genocide in the cathedral, one of them also made such a proposal, “it is necessary to be self-organized, to meet, convince the local government and organizers that the liturgy must take place at least in front of the cathedral.

In this post (which by the way was sponsored on Facebook), we find the next conspiracy theory. The user Samvel Galstyan writes:

“Blaming Turks in this fire remains just a hypothesis. 80 years ago, the cost of renovating the temple was covered by Jews, the only condition was that the statues of the 28 kings of Israel should be placed on the roof of the temple. Three days ago the kings of Israel were removed from the roof, parallel to the fire of Notre Dame, a fire broke out near the mosque on Temple Mount in Jerusalem. It is necessary to conclude that Jews, masons and the political elite are responsible for all terrorism in this world. The establishment of the third temple of Jerusalem can be considered done, and the coming of the Antichrist will be very soon.”

Conspiracy Theory N5: it was planned

There was also an option about the fire being pre-planned, “there is a need for something bigger to distract from the subject which will unite the nation.” By saying subject, the user meant the “yellow jackets” in France and their demands.

This publication of Radio Free Europe was following the idea tied to the Serbian government circulated by The Alo and Informer, whereby the Notre Dame fire was God’s punishment for waving Kosovo’s flag next to other flags during the ceremony dedicated to the 100th anniversary of the First World War in November.

Thenextweb.com touched upon the twitter discussions about the causes and motives of the fire. According to the published article, the most conspicuous conspiracy theory has been that this is a series of attacks throughout Europe on Christian churches.

CNN Business also refers to these and other theories. The website writes that social media users, who have a large number of followers, share conspiracy theories by trying to blame the racial or religious minorities for the fire.

Ctvnews.ca has checked facts and published about how a series of theories were false. For example, the news that some dubious man was walking on the balcony of the cathedral was false. In fact, it was an employee who was wearing a reflective jacket.

The article also denies that the fire was intentional, citing officials. They also consider the connection between the fire and extreme Muslims as being fraudulent.

And observers.france24.com also offered five steps on how to avoid believing fake stories about the Cathedral of Notre Dame.

Plus a little humor in the end

“Who burned the Cathedral of Notre Dame? Well, I doubt it was the Mormons, so it must have been the Masons. If it was the masons, then it was Soros. If it was Soros then he gave a grant. If he gave a grant, then it was given to someone who was in need, if they are in need then they must be refugees. If they are refugees then they must be Arabs. If they are Arabs then they are Muslim, if they are Muslim then burned on the religious grounds. If was burned on religious grounds then an inter-religious conflict arises, if the inter-religious conflict is maturing, then the role of the Armenians increases, then Armenians are involved, then there is a matter of being saved, if there is a matter of being saved then there is a matter of escaping, then Yuri Gagarin, if Yuri Gagarin then Russian, if Russian then Turk, and since there is a Russian, Turks cannot touch a hair on our heads.”