What News Circulated And Was Refuted Between March 1-15 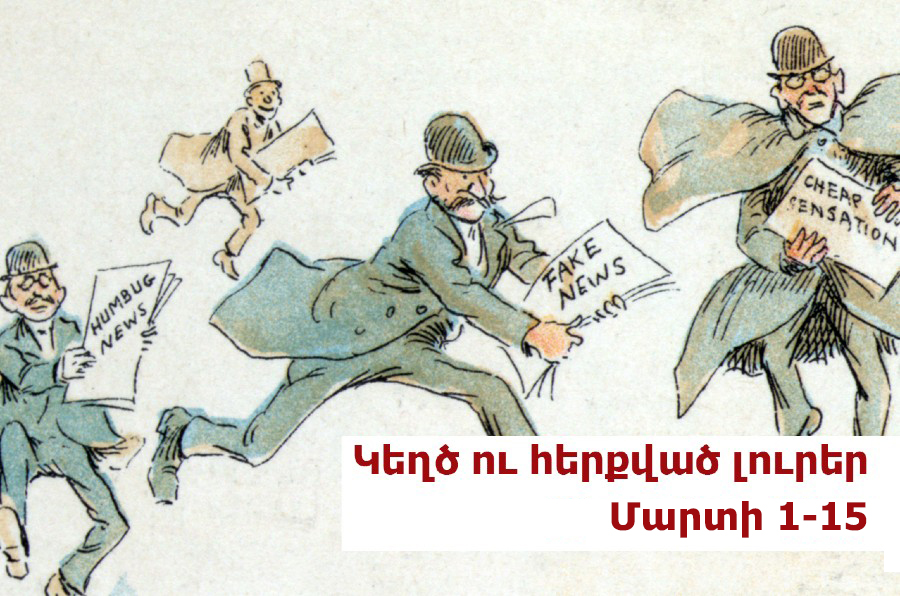 Earlier in the beginning of March, several news outlets, including armtimes.com, shabat.am and yerkir.am, wrote that pensions would be a little bit late: the payment will begin on March 5. Still in 2013, however, the Minister of Labor and Social Affairs announced that the day of receiving pensions is the third working day of the month.

Minister of Labor and Social Affairs, Zaruhi Batoyan, denied the news that pensions were being paid late, as they are paid during the first three working days of the month, and since March 5 was the third working day of the month, it could not be considered late.

One of the media outlets, citing past.am, wrote that the Minister of Education and Science, Arauik Harutyunyan, had instructed schools to transfer secret money to Anna Hakobyan’s foundation.

The issue was probably about the City of Smile initiative against childhood cancer, whose list of donors included Pushkin School 8.

Minister Arayik Harutyunyan denied the news about giving that order to schools, calling it “slander.”

YSU Rector’s false statements about the success of the university

In an interview with 24news.am, Aram Simonyan claimed that YsU is among the top 10% of all the universities in the world and that hostile attacks are being made against him from abroad. Media.am found out that Simonyan’s words are not true. In one of his ratings, YSU did not even enter the top 50%,  and in the second rating, though it was in the first 10%, the rating did not assess the universities academic success.

As proof of an organized attack from abroad, Simonyan brought up the members of the Restart Initiative,  which is funded in part by grants from Georg Soros’ Foundation. However, many grants from the Soros Foundation was received by the YSU, including all the years of Simonyan’s tenure.

Assumptions regarding the new criminal code

The article published on Livenews.am argues that Minister of Justice, Artak Zeynalyan, has promised European officials to accept the draft criminal code, drafted in 2017.

Media.am discovered that the author of the article had published a modified version of one of his older articles, in which almost the same accusations were presented to David Harutyunyan, the former Minister of Justice.

The cause of the accusations was one: the definition of discrimination in the draft law that was not yet adopted in 2017. Both articles were built on speculation about homosexuality.

Armenian National Congress in the government

Yerevan.Today reported that Armen Khachatryan, head of the Armenian National Congress’ legal committee, has gained a position in the government. The website came to the conclusion, “Ter-Petrosyan, in fact, has seriously secured his presence in both the legislative and executive bodies through human resources.”

Khachatryan denied the news about his job in government.

Zvartnots airport was closed for Pashinyan

Analitik.am announced that according to their sources, during the return of Nikol Pahsinyan from Iran, “all the flights to the airport were stopped and the runways were closed before 7:00 pm and any entrance to Armenia’s airspace was banned for all other airplanes.

Fip.am has checked the information and found out that there were no extraordinary changes in the Zvartnots airport timetables during the period mentioned.

Fake news about George Soros in March was abundant in the Armenian media. He was charged with the demolition of Armenia’s statehood, the propaganda of “perversion,” bringing money to Armenia through different means from Azerbaijan and Turkey, etc..

The latest accusation was also voiced by the second president of Armenia, Robert Kocharyan. By the way, Soros was accused of spreading Armenian propaganda in Azerbaijan by Ilham Aliyev’s office.

George Sorors’ activities are the subject of numerous theories of fake rumors and conspiracy all around the world. They have been denied many times n Armenia and other countries in the world.

Another fake remedy for cancer

Tert.am published an article on a fruit that kills cancer, “[…] soursop is 10,000 times more effective than chemotherapy.”

Although the publication is old, from 2015, this is dangerous misinformation. On several occasions, doctors have denied the effectiveness of this fruit for treating cancer. For example, Cancer Treatment Centers of America has published a warning for using this fruit as a treatment, noting that there is no scientific evidence that fruits are treating people with cancer. The US Department of Food and Drug Administration has also issued a warning.

The website Snopes includes a headline of a false article titled Eating fresh soursop is dangerous.