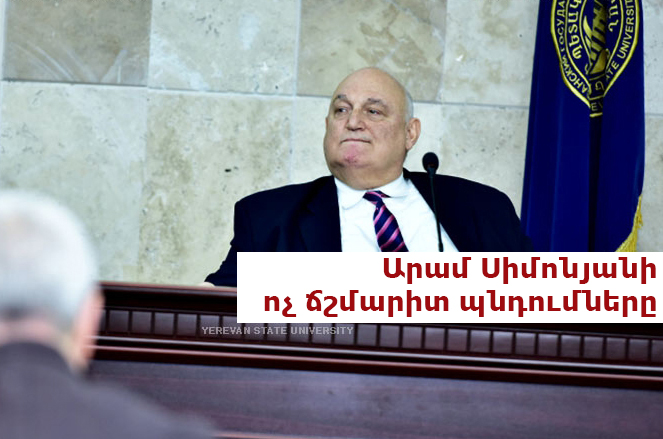 On March 1, 24news.am published the interview of YSU Rector Aram Simonyan, where he talked about the success of the university and the attacks that have been coming from outside, making a series of statements that do not correspond with reality. Media.am fact-checked Simonyan’s allegations.

In an interview with 24news.am, Aram Simonyan announced, “Yerevan State University holds a very high place in international ratings, where we are included, as well as in local rating systems. It has been and will be the top university in our country, and in such rating systems as Webometrics or QS, we are in the top 10% of all universities in the world.”

Armenia is not included  the QS Global Ranking, as mentioned by Simonyan.

Instead, there are QS EECA University Rankings, which includes an estimated 300 universities in Europe and Asia. YSU occupies a space between 151-160 (after the 150th space, the exact rating isn’t mentioned).

Consequently, Aram Simonyan is mistaken. YSU is not included in the first 10% or even the first 50%.

The second rating system mentioned by Simonyan, Webometrics, is a special indicator. It does not evaluate the academic success of the universities or the quality of the educational process. The rating shows the presence and activity on online platforms.

The use of online open sources allows Webometrics to assess approximately 28,000 universities around the world. This year YSU occupies the 2632nd place and entered the top 10%.

Aram Simonyan also affirmed that YSU’s indicator on Webometrics has gone up several hundred points in a span of a few years. Simonyan did not mention how long the span of those years were, but according to the data presented on the official YSU website, the website was in the 2314th place in the Webometrics rating in 2016. So, during this time the university actually went down a couple hundred of places.

In the same interview, Aram Simonyan announced that he is “confident,” that the activities of the YSU students which demand his resignation are being directed from outside, including the George Soros Foundation.

This conclusion was made by Simonyan based on the fact that students often travel and go “in and out” of the country, and participate in various seminars.

Indeed, in 2018, the Student Initiative received a $20,000 grant from Soros’ Open Society Foundation, to encourage more informed participation in the governance process.

Mkhitar Heratsi State Medical University, the Yervand Kochar Museum, the Armenian Committee of the International Organization of Museums, the Naregatsi Art Institute, Matenadaran, the National Academy of Sciences and others have also received financial support from the Open Society Foundation for the implementation of various projects.