The Rumors About Drugs In Candy Have Been Circulating Since 2007 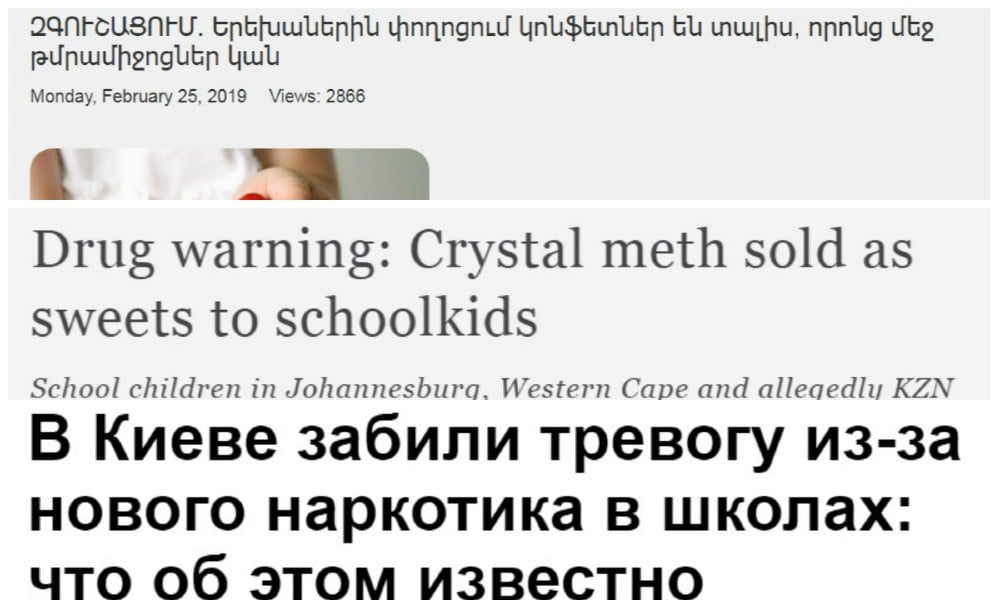 Today posts have been spreading in Facebook and a few other websites about how candies with drugs in them are being distributed among children in the streets. It turns out that the news of these candies is not new and not Armenian. This panic-producing and unverified news has “roamed” around the world

Following the tracks of the news

If we follow the tracks of the news we will find the following post made on February 25 by member of the political party Yerkir Tsirani and former Yerevan Council Member Marina Khachatryan: “Dear parents, according to circulating rumors, different individuals are approaching children on the street and offering cherry or strawberry flavored candies, which contain different drugs. Not wanting to cause panic by any means, please talk to your children, take on explanatory work and be attentive towards our future generations, no matter if it’s your child or someone else’s.”

The author cites the circulating rumors, explaining in the comments that she does not have detailed information, but until she can verify the accuracy of the information, children may suffer.

The post didn’t specify which residential streets in Armenia this is taking place, since when and why are “different people” distributing this kind of candy.

However, the post was taken as a truth and began to spread as such among Armenian websites such as kentron.am, analitik.am, socialmedia.am. The candy was described in more detail on info24.am and more than a few pictures were then published by loool.info.

The retrospective search of pictures of candy published on the Armenian websites show that they are not new. The same photos have been published on Azeri and Russian website and circulated on social networks.

By the way, some of these sites can be found on the list of mushroom websites published by media.am.

Nelli Duryan, head of the police department for the protection of juvenile rights and domestic violence, touched upon the news on Facebook today. She said that they had not received such an alarm in the police and urged the public to notify them if they witnessed such a phenomenon. She also called for avoiding ungrounded information.

Meanwhile, Marina Khachatryan wrote as a comment, regarding the source of this distributed news, “My dear friends, I’m being attacked by governmental fakes. This strengthens my fears. Instead of releasing a formal statement, they try to silence me with fake news and media, which, I say in advance, will not work. I am going to pick my child up.”

A few simple steps in searching allow us to find out that according to media reports, similar candies are being “distributed again.” For example, in the autumn of 2018 in Volgograd, Russia, such a rumor circulated and was refuted.

In 2017, the news was spread and refuted in the Ukrainian media.

In Kazakhstan, the fact checking platform Factcheck.kz also checked and denie the news about the distribution of such candies among schoolchildren and cited the website snopes.com.

According to this publication, such rumors have been circulating in the western parts of the United States since 2007, with a substance called Strawberry Quick which looks like candy on the outside and contains methamphetamine drugs.

The site confirms that the police discovered a candy-like drug which contains crystals, but there are no convincing arguments that the candy appearance is meant to tempt children.

The same story was accompanied by various photos and texts in different languages and across social networks over the years.