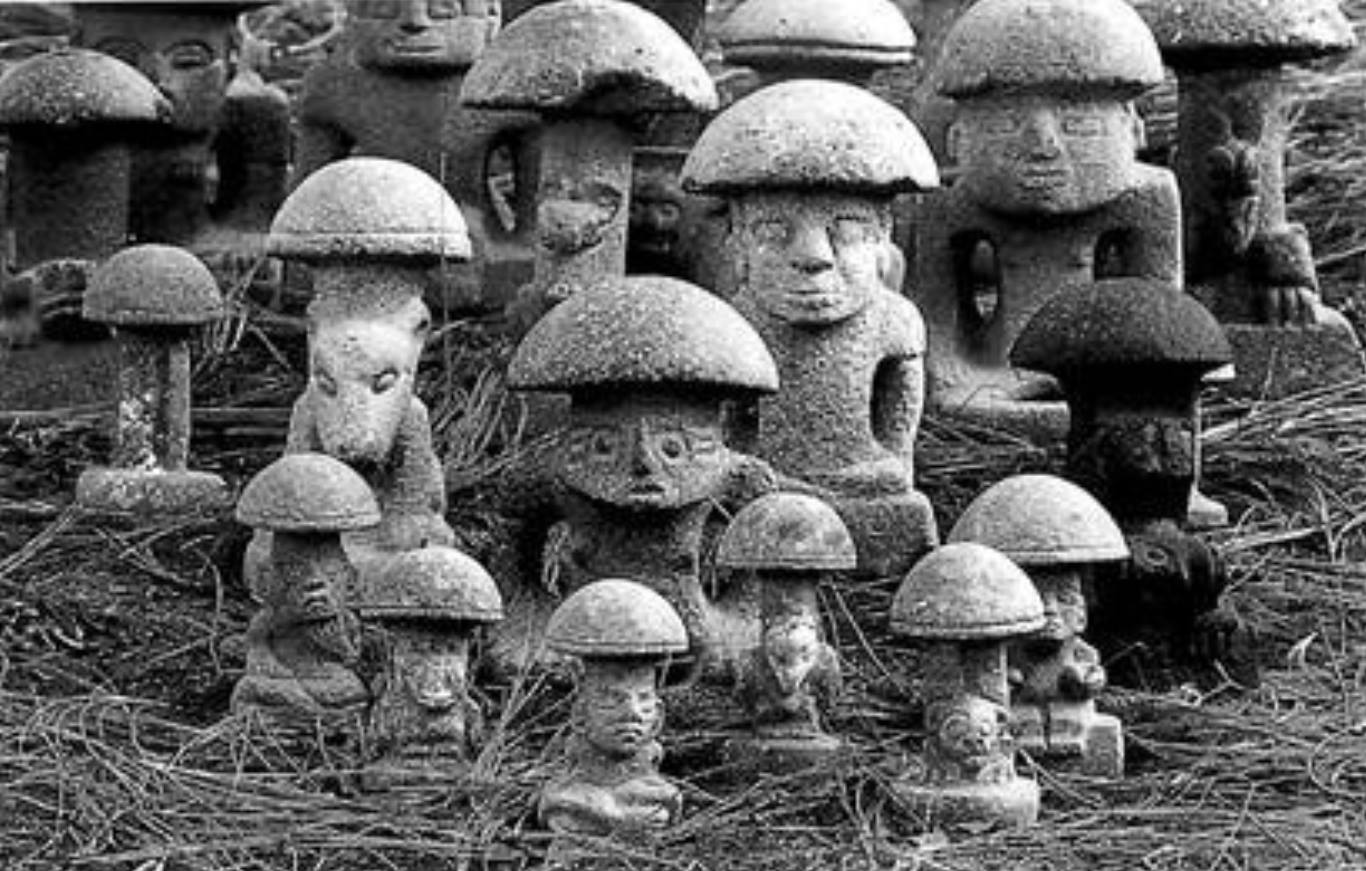 The problem of fake news is challenging journalists throughout the world and appears in many different formats. In Armenia, the most popular are semi-news outlets, semi-entertaining websites, which do no create their own content, are full of contextual advertising and spread like mushrooms.

Mushroom sites aren’t new in the reality of Armenian media, and those who read the often misleading news that they spread, are left with a distorted picture of both general social and political life.

We have examined the peculiarities of mushroom websites, spoke with some of the co-distributor groups on Facebook, as well as asked the industry professionals how those sites affect the Armenian media.

Strictly emotional, sensational language. Ordinary media use neutral wording. Unlike them, the yellow press gives preference to the language of sensation. Mushroom sites follow the example of the yellow press.

Unlike the yellow as well as the neutral press,  mushroom sites do not create their own articles, only re-publish from other media. For example, the Iravaban.net article “You Will Pay a Fee to the State for Keeping Pets” was reprinted on a number of mushroom sites without changes.

Naturally, as the number of visitors grows, so does the money which comes from the advertising. The system is automated and very simple to use. Typical media, however, avoid using contextual advertising as the display ads may contain poor content.

To ensure profitable advertising you need to have a large number of visitors. For example, hayreniq.pro has 40,000-60,000 monthly visitors, according to the SimilarWeb digital data collection tool.

Simultaneously, mushroom sites do not pretend to be long-lasting projects, many of them work for several months and are made very indifferently.

Working hard to provide a large number of visitors, they have become one of the key sources of unverified, false or misleading information on the Armenian media field.

Mushroom sites have unusual domain names such as hopar.info, janhavesov.ru, desicdenic.ru. Domains can be repeated in one or more ways, such as goodinfo24.ru, goodinfo-24.ru, goodinfo24.com and more. By checking one of these with the DomEye Domain Search Tool, you’ll see that they are linked to each other with the same IP address.

By the way, the domains also do not often match the typed website name. For example the site with the domain name interesnoznatt.ru is called “Brave Armenians,” and sportarmenia.ru is the “Info Guide.” This kind of small untidiness is are characteristic of mushroom sites.

Mushroom sites are very active on Facebook, with an overwhelming majority of visitors coming through social networks.

Almost all mushroom sites offer to like this or that Facebook page or group. It is remarkable that these pages and groups are repeated. For example, you often come across the pages ArMedia, Info Guide, Chachanak, Moderator.

Moderator also offers services to collect a Facebook audience, “active groups for new sites,” “pages for orders of up to 100,000 likes” and more.

The last clause can be countered: Most visitors to most media outlets come from Facebook. However, even 10-20% of direct inquiries and searches may indicate that the media was remembered by the reader, whereas mushroom sites often have short lives, and as mentioned above, have almost unrelated names.

Mushroom websites are connected to each other.

This can be found out in two ways:

Google Analytics ID or Google AdSense: Using the DomEye tool, you can find any site’s Google Analytics ID and Google AdSense, which are necessary to place visitor statistics and contextual ads on the site. For example, when you search for kanaci.info, you’ll find that many other sites are also linked to its Analytics ID. When searching for sportarmenia.ru, we will find nine other sites with the same AdSense, including infohay.ru, hayerov-tv.com.

The same Analytics ID can prove that the sites were created by the same person as they all go to the same Google account. Different numbers appearing after the ID code snippet are the index number of the linked websites. For example, 53 sites are managed from the account 1ic.pro.

The matching AdSense allows you to suppose that the sites are linked to one moderator. By the way, if you match the AdSense but the Analytics IDs don’t match, you can conclude that the sites have been created by different people, but they were later acquired by the same person.

IP address. The DomEye tool also allows you to see IP addresses, which are, in fact, information about the server on which the website exists. When searching for azdarar.ru for example, you can find 17 websites linked to the same IP from a website about bathtubs sdelatbanyu.ru to online games axegaming.net.

Matching IP address do not necessarily indicate the same moderator. Sites can simply use shared hosting, which will be displayed as a single server code when searching. It is worth noting that most mushroom websites use Russian servers. They are inexpensive and the quality or availability of technical service cannot be decisive when working with quantity.

Who creates and coordinates mushroom sites?

“In this case, there may be no need for a developer, mostly they are on ready-made templates. The complexity is just the content update, which can be automated.”

Arman Tumasyan also told Media.am about automatic updates. He said that his Facebook platforms which have a large number of followers, receive money from various websites for posting articles to provide views and clicks.

Tumasyan says that with one algorithm, he can generate materials on 20 sites and Facebook platforms, all in automatic mode.

“We do not produce content, we take materials from other sites, put a copyright note indicating that its taken from another website, and publish” said Arman.

In his opinion, there are three types of websites in Armenian media: official, news and “slacker,” for which “it doesn’t matter if it’s summer or winter, if Nikol is in power or Serzh, they will publish materials only to get people to go to their website and read.”

When asked whether or not this leads to the spreading of false information, he replied that verifying information is not necessary, and that even publishing a conversation heard in a bus ride is the manifestation of the freedom of speech.

Media expert Samvel Martirosyan mentions that the impact of such mushroom sites in the world, and in Armenia especially, is noticeable. “There is no well-established tradition of media consumption in Armenia, people simply go to Facebook, read whatever they see, and often do not even know what the source was. We also do not have Armenian news aggregators, like Google News and Yandex.news.

Martirosyan notes that as a result, the only choice is social networks, where mushroom sites are actively spreading and advertising. “It is known that corrections get up to 100 times smaller audience than the initial disinformation.”

For this article, Media.am has studied 100 mushroom sites distributed on the Armenian Internet domain from January 17 to February 11. You can see this list by following the link. 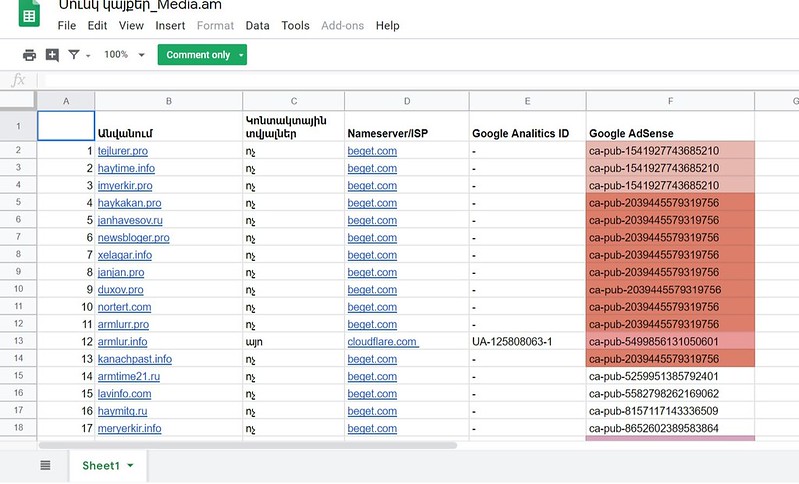 You can leave comments and suggestions in the list, but you cannot edit it.