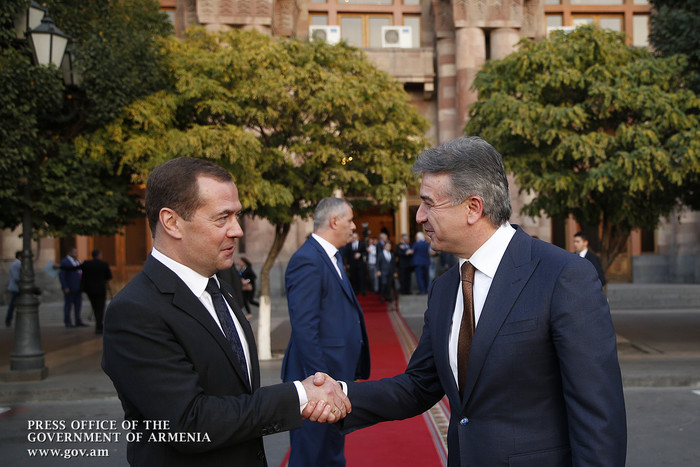 Let’s try to figure out the truth, relying on official data.

According to Armenia’s National Statistical Service (NSS), trade between Armenia and Russia between January and August 2017 comprised US$991.7 million, of which US$310 million was the export of goods from Armenia to Russia and US$681.7 million, the import.

To get a more complete picture, Figure 2 provides a break down of the components of the data.

And so, Armenia’s statistics confirm Karapetyan’s figure, Armenia-Russia trade between January and August 2017 increased by 23.5%, in which export increased by 36.6% and import by 18.3%.

Now let’s go to Russia and study its statistical data.

Recall that for January–August 2017, Armenia’s NSS data for trade with Russia was US$991.7 million. Russia’s FSSS data for this indicator was US$973 million.

Interestingly, the data for the corresponding period in 2016 also varies; in particular, according to Russia’s data, trade with Armenia comprised US$758 million, while, according to Armenia’s NSS, this figure was US$803.2 million.

As we can see, Armenia’s statistics always presents trade with Russia in bigger numbers than Russia does.

Understandably, Armenia plays a minor role in Russia’s export, while from the perspective of our economic and statistical picture, Russia’s role is incomparably greater.

For example, a several-million-dollar increase in export with Russia can substantially change the real picture of Armenia’s economy; meanwhile, such an “exercise” by and large will have a slight impact on Russia’s economy.

It’s easy to notice that such differences in percentage, 2% in 2017 and 5% in 2016, prove that they are not the result of methodological differences.

Clearly, even Russia’s official statistics don’t confirm Medvedev’s claim of a 30% increase; meanwhile, Karapetyan’s numbers are seen in the NSS data. But as we see, a statistical problem exists.

It was interesting to examine also the Eurasian Economic Union (EAEU) economic committee’s data on Armenia-Russia trade; even more so that the two entities present the data with EAEU classifications.

According to statistical data published on October 25, 2017, on the EAEU economic committee’s official website, between January and August 2017 trade between EAEU countries comprised US$34.2 billion — an increase of 27.5% from the same period in 2016.

In Figure 3, we tried to study Armenia’s trade within the scope of the EAEU.

As we see, according to EAEU data, export from Armenia to Russia rose by 36.6% compared to the previous year. It’s noteworthy that also in this regard Armenia’s NSS data corresponds to the EAEU data.

We present the other component of trade — import (Figure 4).

As we can see, the import data differs from the NSS data by 1% (according to the NSS, the January–August 2017 import comprised US$681.7 million).

That is to say, according to the EAEU data, Armenia’s trade turnover with Russia grew by 35%.

To summarize, despite the deviations, Karapetyan’s data seem closer to the reality since, for example, the NSS export figure corresponds to the EAEU number, and the difference in import figures is not significant.

Taking into account that the measuring unit was the US dollar, the data was formed from the same sources and classified on the same basis.

And it’s incomprehensible how the three entities’ (Armenia’s NSS, Russia’s FSSS, and the EAEU) figures so substantially varied from one other on the same indicator.

Such differences deepen doubts about the reliability of statistical data.

Writing this article, I used the following official sources: