Electronic purchases, their main objective being to reduce corruption risks, have completely been introduced in the public procurement system.

The government and various donors have provided significant funds to enhance this system. For example, the World Bank alone provided a loan of about US$400,000 (not counting grants. Later, much more money was spent to fix technical problems in the system).

For some time, the issue of adopting a system of electronic purchases seemed to have been forgotten, but in 2011, former finance minister Vache Gabrielyan announced implementation of the system, but it was expected to launch in 2012. It should be noted that no significant progress was made in this process in 2012–2014.

For the state, e-procurement seems to be a trump card for a transparent and modern work ethic. Last week, Head of the Ministry of Finance’s Public Internal Financial Control and Public Procurement Methodology Department Sergey Shahnazaryan declared that the changes made in the sector have already yielded positive results. “If in 2015, average participation in tenders was 3.4 for one tender, in 2016, it was 6.4. That is, there’s an increase in competition, which is encouraging.”

This is how the situation is officially represented. Economist Artak Manukyan analyzed the numbers and presents the myths of the public procurement sector below.

On January 1, 2017, there were around 557 contractual clients in the electronic purchases system.

This number proves that not all the public sector players — which, according to Figure 1, could’ve comprised 4,736 clients — are fully connected to the system. That is to say, the registered clients comprise around 12% of all possible clients.

The situation is even worse in terms of participants’ registration. According to the state registry, on January 1, 2017, registered in Armenia were 105,614 individual entrepreneurs and 67,371 legal entities carrying out commercial activities. 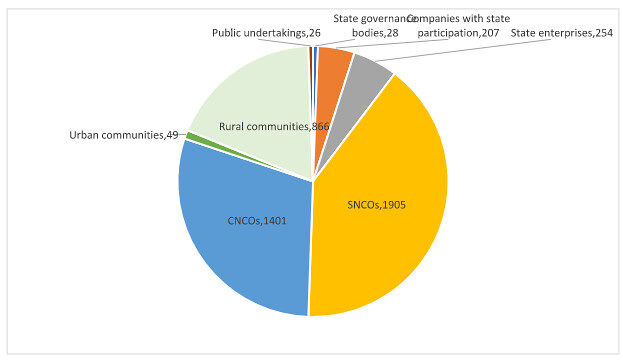 The number of possible registered participants overall in the same period could’ve been around 172,985 business entities. Note, included in this number are also companies not carrying out activities.

As you can see, talking about the popularity and confidence of the system is myth.

It is believed that the main part of public procurement will be carried out through the electronic purchases system. As the result of our study show, this too is a myth.

According to the Procurement Support Center’s annual reports, in 2015–2016, the number of tenders announced in the procurement sector rose by 15%.

Moreover, there are technical and other problems in the system, as a result of which the liquidated procedures are around 23%. That is, one out of every five tenders announced through the e-system doesn’t happen.

Statistical data shows that the effectiveness of various donor and state funds for years directed at implementing e-procurement is still far from satisfactory.

Myth 3: There is great competition in the procurement system.

Playing a special role among the indicators of the effectiveness of the procurement system is the average participation rate, which in recent years did not surpass 1.9 on average. The average participation rate refers to the competition and hence the effectiveness of the procurement system. That is, the greater the competition, the higher the trust in the system.

P.S. Along with the declarations of transparency, the 2011–2014 Procurement Support Center’s annual reports have strangely “disappeared” from the public procurement’s official website.