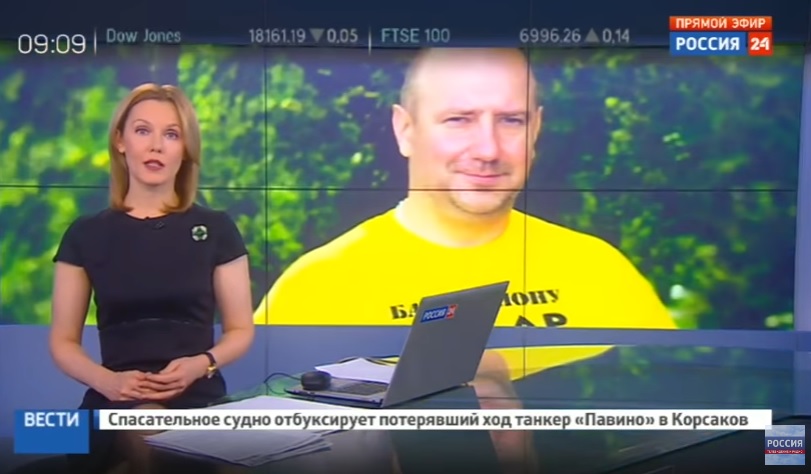 Between 2000-2003, as a result of President Vladimir Putin, all so-called “HTB in the occupation” of Russia’s major news outlets began to operate under strict Kremlin control. From November 2013, when the Ukrainian “Maidan” began, which ended with the resignation of the Kremlin supported Yanukovych, the Russian media went from biased news to propaganda war, where all methods were acceptable.

But if those manipulations of war were previously in line with the principle of Goebbels, 40% truth/60% false, there would be an increase of information, which would turn reality upside down.

It seems obvious that in the duration of one year, no one can earn 40 billion dollars, especially in the financial world of the unidentified former soldier, but having said that, “Aydar” Ukrainian “nationalist” former battalion commander Sergey Melnichuk has two old cars: “Jeep Grand Cherokee” from 1994 and 1988-produced “ГАЗ 2411”, and the Russian news agencies even spread the news that he has 38.7 billion dollars.

In the Armenian “Ucom” company’s cable TV minimum package the neighbor of “Россия-24” is the Russian economic TV channel “РБК”, which after delivering information does not distort it to an unrecognizable stage, it is correct in its economic specialization and has a limited audience. From the news of “РБК”, this type of picture appears.

Although “РБК” also seems to hint at Ukrainian authorities that it won’t hurt to sit on Melnichuk and other joke-lovers for two years.

The joke made by the Ukrainian authorities, rendered serious in Russia, may not have been considered a big problem, if not for the confidence of the main Russian TV channels that their audience not only has no other source of information, but also a level of critical thinking, that they won’t believe absurd rumors.

This is another reason to understand that similar channels should not be free to spread in Armenia, and to not include them in the original cable package, since although the majority of our TV viewers know the language, not enough are media literate enough to everyday filter the foreign TV news from their mixed-in tremendous propaganda lies, which often relates even to Armenia.