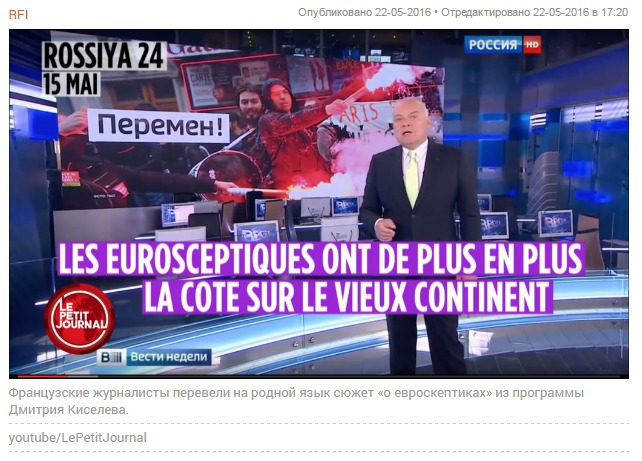 This week took off with Western media outlets describing the latest episode of Le Petit Journal, a French news and entertainment program that airs on Canal+, that revealed how the words of French passers-by were mistranslated and distorted in the May 15 episode of Vesti Nedeli [“News of the Week”], a weekly news program that airs on the Rossiya 1 state channel, and how host Dmitry Kiselyov labelled it a rise in “Euroskepticism” (anti-EU-ism) in France.

The Le Petit Journal journalists first back-translated from Russian the words of those who spoke with Vesti Nedeli reporter Anton Lyadov, then found in France those same individuals and asked, is this what you said in the interview? In the videotaped conversations, all either denied that they said such things or said their words were taken out of context.

They mainly insist that since the occasion was a protest against France’s new labor laws, that’s what they spoke about with the Russian channel’s reporter, but they said nothing “Euroskeptical” or anything racist againt migrants: pensioner Nicole Bern believes she was shown to be racist in the Russian broadcast.

Le Petit Journal claims that after its revelation, the Russian TV channel completely removed the piece from its website and then uploaded it — with corrections.

That a truly modified piece was reposted can be judged from the fact that in the approximately 12-minute reportage, almost 6 minutes of the same pensioner Nicole Bern’s remarks have been included, perhaps without editing (4:45–10:40). No reportage usually includes such a lengthy segment, and that, of a conversation with a random passer-by.

It’s obvious that the Russian team wants to “prove” that among a few speakers at least this woman, in any case, spoke about migrants and, indeed, she is not exactly “enthusiastic” about the existence of immigrants in her neighborhood.

But in all this now a non-journalistic, propaganda tool has bulged out, which is striking example to explain to students how not to ask questions. Behold reporter Anton Lyadov’s questions that change the subject and guide respondents:  are there many mosques? (8:10); are there many immigrants in your neighorhood? (8:42); you pay taxes and loans because of these people, right? (10:28).

Does it seem that these questions confirm facts? The first two, perhaps, but only if you’ve honestly told your interviewee within the frames of which topic you’ll be presenting their words, and in that case when the purpose of producing your reportage is to reveal the truth and not propaganda war. But the third question, to elicit a complaint by recalling taxes and loans, is provoking.

What the French journalists did fits within professional standards — checking the facts, but what they revealed about Russian journalists is the use of a prohibited weapon — distorting the facts.