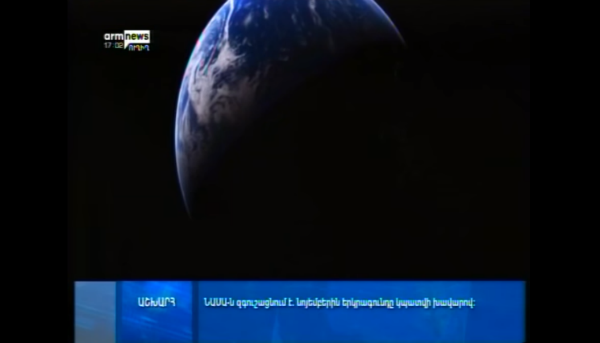 ArmNews on October 21 began its news broadcast with the news that there will be complete darkness on Earth for15 days. TV viewers were informed that two planets, Venus and Jupiter, will align in November, sunlight will decrease, and Earth will experience a total blackout for 15 days.

ArmNews continued to broadcast the news. This was in the 10:00 news slot this morning.

The false news of a planetary blackout has been circulating online since May and June of this year — the hoax being revived on and off.

The news was first published by NewsWatch33, citing NASA as its source (as did ArmNews TV). The news was discussed online and refuted by the rumor verification site Snopes.com, which deemed NewsWatch33 a fake news site.

However, from time to time, news of the blackout continues to surface and is subsequently disproven. The news was even addressed and refuted on NASA’s official website.

It’s possible that serving as ArmNews’ source for this fake news was the Russian-language story on UFOspace.net [RU], as the structure, language, and conclusion of the article is very close to the news broadcast on Armenian television.

“We have 15 days of darkness ahead of us, and you can imagine what might happen on earth during this time,” says Esther Mesropyan (in Armenian) on air — the same words published (in Russian) on UFOspace.net.

After Facebook posts revealed the news to be a hoax, ArmNews removed the video from YouTube (the clip above was recorded from broadcast television). But this doesn’t resolve the problem. People saw on TV a video that forecasts 15 days of darkness on their planet. A mini apocalypse, if you will. There are people who have seriously discussed how to prepare for this disaster.

It’s one thing when false news is disseminated online and refuted on other platforms, and another thing when a TV station’s editorial filters don’t work so well that a fake and panic-inducing news story is aired several times on television.

This story is so unbelievable that it’s not appropriate even for April Fools’ Day. To avoid this April Fools–like situation, the news could’ve been verified. In this case, the easiest thing to do would be to search for the news (or its refutation) on the NASA website. And to check suspicious news from international, particularly English-language news feeds, there’s a very convenient website: Snopes.com, which, as stated above, disproved the news of the blackout, labelling it “False”.