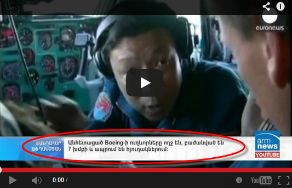 One of the golden rules of journalism is that the news has to be confirmed by three sources — if, of course, the newsroom that produces the article or televised report aspires to be credible in the eyes of the public.

One of the tricks employed by so-called “yellow press” is that a credible source is generally not necessary to write a news story. Gossip is enough, and in some cases, the news can simply be fabricated.

It can be understood when articles from the American or Russian yellow press on the likes of Jennifer Lopez and Miley Cyrus appear in Armenia’s yellow press. But less comprehensible is when reports from the Russian news outlet Moskovsky Komsomolets attract the attention of Armenian newsrooms claiming to be reputable.

April 6 was a Sunday. That evening, two different people excitedly told me that the missing Malaysia Airlines Boeing 777 was found in Afghanistan and the passengers are alive. They had seen the news on television.

I turned on the TV and surfed through CNN, BBC, and Euronews. Nothing. I called those who conveyed the news to me. They said they saw the news on ArmNews. I watched the ArmNews daily broadcast and found the sensational story [AM].

The source of the story, apparently, was an article [RU] published by Moskovsky Komsomolets on March 31, also reported by Piter TV [RU].

“New details and new discoveries in the case of Malaysia Airlines’ missing Boeing. The Boeing 777 that disappeared with 227 passengers and 12 crew members is now southeast of the city of Kandahar in Afghanistan,” reports ArmNews.

The ArmNews story initially mentions Moskovsky Komsomolets and Piter TV, but it’s not obligatory for someone who’s turned on the TV as background noise to comprehend this information. A news ticker simultaneously reads: “Disappeared Boeing passengers are alive, are divided into 7 groups and live in huts.”

And no matter that the ArmNews story also describes other details about the Boeing’s search activities. I know at least 3 families who unequivocally accepted the news not unlike an episode of Lost.

First, local newspaper Haykakan Zhamanak wrote: “Member countries of the Eurasian Economic Union to be established in 2015, among which, in all likelihood, might be also Armenia, will have a common currency, the Altun.”

The headline of this story ended in a question mark, and the source was once again Moskovsky Komsomolets [RU].

Altun was discussed seriously and at length on Facebook.

The next day, the RFE/RL’s Armenian service (Azatutyun) prepared a story [AM] on the Altun.

In this case, the Moskovsky Komsomolets news became an opportunity to present the opinion of an Armenian expert on the Eurasian Economic Union’s common currency.

In both cases, the sources of the Moskovsky Komsomolets articles are anonymous. In the case of the missing Malaysia Airlines flight, cited is a source from the special services wishing to remain anonymous. The article about the Altun was constructed on the basis of one Moskovsky Komsomolets anonymous source. In this Russian news outlet, there is no lack of references to anonymous sources.

The news about the lost Malaysia Airlines flight found in Afghanistan being absurd — let’s not talk about that.

About the Altun, a basic search reveals that no one other than the Moskovsky Komsomolets reported this. Not a word about the Altun in reputable Russian news outlets.

Is it so difficult before republishing these two news stories in Armenian media to follow the aforementioned rule; that is, to verify the sources? I don’t think so.

I used the examples of credible and reputable Armenian news media on purpose — because if they’re spreading “yellow Russian press” or relying on that press, what can we expect from the others?