Hurricane Sandy on the Web 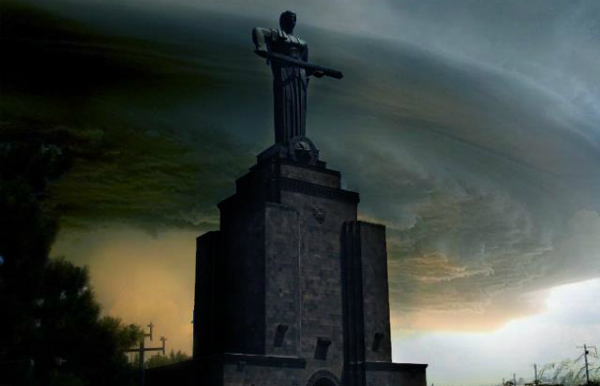 Designer Vadz Ghazaryan shared on Facebook today a photoshopped image of Hurricane Sandy, otherwise known as Frankenstorm. In the image, Hurricane Sandy descends over the statue of Mother Armenia in Yerevan. Fake Hurricane Sandy photos disseminated at lightning speed yesterday prompted the meme of the storm in different cities. And the fake photos were disseminated and reposted by journalists, bloggers, and ordinary Internet users.

The Poynter Institute quickly responded to the hoaxes and published an article, outlining what journalists should do to avoid getting fooled.

Mashable did a round-up of the 7 fake Hurricane Sandy photos that were widely shared on social media.

The fake photos are only one aspect of the ongoing story about Frankenstorm coverage in traditional and social media. Prior to the beginning of the storm, newspapers, television, and the Internet were reporting useful and many-sided information to the population. For example, The New York Times published a special interactive map of Hurricane Sandy’s trajectory. Ustream ensured a live stream by webcams from different areas in different cities impacted by Hurricane Sandy.

Google quickly published a crisis response map for Hurricane Sandy, with all the useful links. Twitter reminded its users that during emergency situations, they can still send and receive information by SMS and published a useful list of Twitter accounts and hashtags to follow from the states most affected by the storm.

Hurricane Sandy photos and videos were disseminated on all possible social networking sites, especially on Facebook and Twitter. But one of the most powerful tools depicting the most powerful storm in 2012 yet was a newer social networking site — Instagram. Many used this tool to share photos of the storm. A special website was even created, #instacane, which tells the story of Hurricane Sandy through Instagram.

The Committee to Protect Journalists also immediately issued a guide on journalists’ safety during natural disasters.