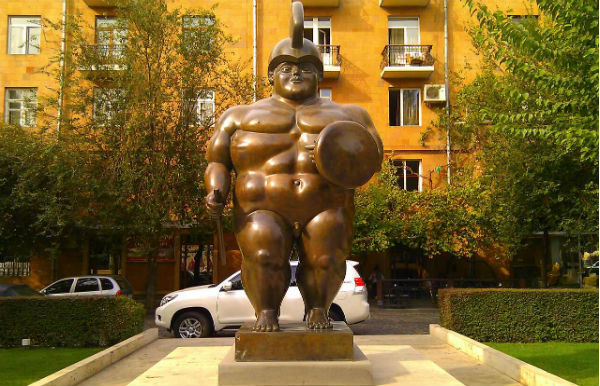 Armenia’s news media has a distinct feature, which is very easy to describe: “There’s no discord that’s not possible to overcome in a logical timeframe.” Every time you think it can’t get any worse, you’re proven wrong.

It was a bright October morning when I, aghast, read the following terrifying headline on 7 Or (“7 days”) news site: “The Roman Soldier’s Penis was Cut Off”. The story was written in a very surprising way and with no author credit. Moreover, according to the news piece, “that damn thing” was cut off after Armenia’s World Cup qualifying match with Italy; that is, two weeks ago.

Let me quote: “According to some rumours, this was done by Armenian fans after defeat in the Armenia-Italy football match.”

It’s astonishing, no? I too was quite amazed — especially since I saw “that damn thing” a few days ago. And it was unshakable.

But soon a similar piece appeared on Lragir: “The Roman Soldier’s Penis was Yanked Off”. Do you see the media pluralism? According to 7 Or, “that damn thing” was cut off, while according to Lragir, it was yanked off. The content of the piece was quite similar to 7 Or’s, though this time the article was credited to someone by the name of Anahit Ananyan.

Thanks to the media literacy group, it soon becomes known that a letter* was sent from a completely unknown email address, which several news outlets considered a press release worthy of publication and thus published and disseminated it.

All right, let’s put aside for a moment the fact that the Armenian press loves to publish everything that comes in its inbox (let’s be grateful to spam filters; otherwise we’d also be reading about a Nigerian king’s inheritance of billions and great offers on Viagra). Let’s put aside the fact that passing off such text as your own without editing it or making the appropriate reference is not a good thing.

But “that damn thing” and the statue attached to it are in the center of Yerevan. I’m not saying send a journalist there (though, the editors at Armenpress weren’t as lazy and sent someone to check). I’m not saying call the Cafesjian Center for the Arts and ask. Who can be bothered? But was it hard to find an acquaintance who lives in the center and ask him or her to go check?՝[[wysiwyg_imageupload:349:]]

But the story continues. The Cafesjian Center for the Arts was forced to officially deny the news, which 7 Or published, adding, “It had been reported earlier that the penis of the Roman soldier erected near the Cascade complex had been cut off”. One is left with the impression that it really had been cut off…

But this too isn’t the end. Three hours after the news had been refuted, 168 Zham (“168 Hours”) decided to put in its two cents and, lo and behold, announced to the world “The Roman Soldier’s Penis was Broken (Updated)”. Now it turns out “that damn thing” is broken…

After all this, a medieval proverb crossed my mind — “Lingua Latina non penis canina”.

*The letter received by news outlets read as follows:

“I don’t understand why Armenians have become so cruel — where does all this hate come from? Hatred has already passed all the limits; apart from hating each other, they hate statues. Man hating man is still possible to understand logically, but hating statues is a new culture. How long should our statues be tortured?

“And now some statue-haters have cut off the Roman soldier’s penis. What should we call them? They’re probably suffering from an inferiority complex of their own body parts, to be imposing the same unique approach toward a statue — I mean, how can you be jealous of a statue?

“Our people have to reconcile with statues; otherwise, if things continue this way we will be left without statues.”