On September 27, a war was launched against Artsakh, which was unlike those of either 1991-94 or the April war of 2016 in terms of intensity and volume, and it continues to this day: war is taking place in two directions — on the battlefield and in the information field.

Early in the morning on the first day, when it was announced that at 7:10 am the Azerbaijani troops had attacked the entire length of the line of contact, using air and missile attacks, everyone hurried to Artsakh as soon as possible in order to contribute to the defense.

Representatives of Armenian and foreign media also rushed to Artsakh.

The Armenian media, which has already learned to work regularly in a state of war, in an emergency mode, began to transform and edit their work style.

In the afternoon of the same day, Armenian media correspondents were already at the scene, covering the aftermath of the rocket attack, covering the press conferences held at the Artsakh Information Headquarters, trying to prepare reports from the battle positions.

Journalists working at the scene, some of whom worked in the first days without defense and were often targeted by the enemy, were quite active in covering the events.

Some of the media also started thinking about how to present the situation to the outside as accurately as possible. They also conducted interviews and special editions in Russian and English.

The first ten days of the war

In the first days of the war, there were already statements that the attack was not so unexpected for the Armenian side: The Turkish-Azerbaijani military exercises and further developments in Tavush following the events in July suggested that something was being prepared. Experts regularly talked about it.

Interesting developments took place in the media: the adversary became the enemy (also at the official level), the materials valuing the army and the soldier increased, as did the stories about heroes.

And perhaps the most important was that the Armenian-Azerbaijani conflict turned into Armenian-Turkish. It happened when the media, including foreign ones, started talking about mercenaries being transferred from Turkey to Azerbaijan. Evidence about them was then presented by the Armenian side.

That and Turkey’s open declaration of participation transformed the conflict. It became a struggle between Armenians and the Turkish-Azerbaijani tandem.

We present the most discussed political topics in the media during the first ten days of the war in Artsakh.

The recognition of Artsakh

From the very first day of the war, the need to recognize Artsakh became a major topic on the political agenda and in the media.

During Channel 5’s news program on September 27, the author mentions, “The Artsakh issue has a solution: the world recognizes the independence of the second Armenian state, extinguishes the fire under a boiling cauldron in the Caucasus.”

Political scientist Karen Bekaryan touched upon the topic on October 5. “What could be done to make things more clear? The only way for Artsakh to exist physically is for the international community to recognize its independence. How much blood needs to be shed to understand that?” 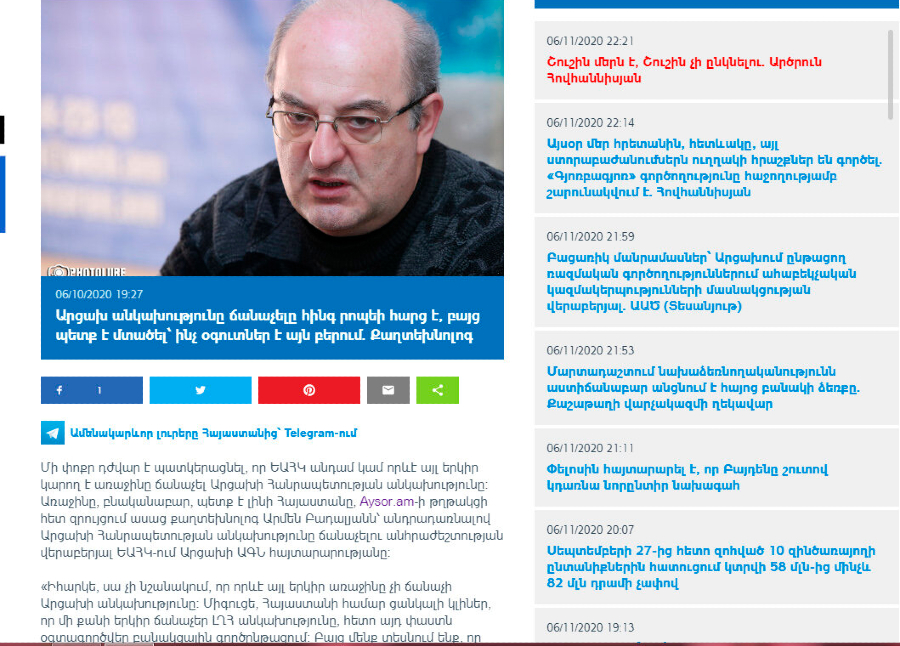 Aysor.am published the opinion of political technologist Armen Badalyan, who said that “it is a bit difficult to imagine that an OSCE member or any other country can be the first to recognize the independence of the Artsakh Republic. The first, of course, should be Armenia.”

“Of course, this does not mean that no other country could be the first to recognize Artsakh’s independence. Perhaps, it would be desirable for Armenia for several countries to recognize the independence of NKR, and then use that fact in the negotiation process. But we see that there is no such process yet,” said the political technologist.

The deployment of peacekeeping troops

Arthur Ghazinyan, the co-founder of the “One Armenia” party, spoke on the topic on Channel 5 on September 29, noting that Russia’s active participation could lead to the deployment of Russian peacekeeping troops.

“Eventually, the principle of incompatibility of peoples will be established, that Artsakh and Azerbaijan and are henceforth incompatible. Their combination will lead to the ethnocide of one. If the peacekeepers enter, the fact will be confirmed that Artsakh will no longer be part of Azerbaijan, the status quo will change. The region will not tolerate any other contingent for peacekeepers.”

The leader of “Fair Russia” Sergey Mironov also hinted at the deployment of peacekeeping forces in Aysor․am, according to which, after the ceasefire, Russian peacekeepers may enter Nagorno Karabakh.

“I would like to add that, unfortunately, we see that the external forces, here you can easily guess that they are not some abstract forces, but NATO member Turkey, is obviously contributing to the development of this conflict, a long-lasting conflict,” the politician told reporters.

Referring to Mironov’s statement, the author of lragir.am Hakob Badalyan notes that the topic of peacekeepers has always been in the content of the settlement process. But, according to him, it is not accidental that it is in the war unleashed by Baku at the instigation of Turkey that Mironov quotes the topic. “Russia has decided to get a feel for the mood, and that is why it is doing it through Mironov. ․․․ Deep down, of course, peacekeepers will not be a guarantor of regional stability. Instead, Russian peacekeepers could become a trap for Russia, beginning the end of pushing Russia out of the Caucasus and dismantling Russia.”

The placement of mercenaries in the Artsakh-Azerbaijani contact line

The media started talking about this topic from the very first days of the war, and then evidence was presented.

During the first few days, RA Prime Minister Nikol Pashinyan spoke about mercenaries on the Russian 1 TV program, “60 Minutes.” “According to our reliable information, military instructors, high-ranking military personnel are now in the command posts of Azerbaijan. In some places, they are even leading military operations. There have been numerous reports in the international press that Turkey is recruiting mercenaries in Syria and moving them to Azerbaijan to take part in the war against Artsakh and Armenia.”

Political scientist Karen Bekaryan, referring to the topic, notes that Russia and France have already officially stated that mercenaries are fighting against Artsakh.

ArmNews journalist Abraham Gasparyan was making a series of revelations about mercenaries, who on the first day of the war mentioned in his evening news episode that the Arab social networks have been mentioning that Turkey is recruiting mercenaries who fought in Syria since July 29 and will take them to Azerbaijan this time as well.

“I received the decree of the head of one of the terrorist organizations to his subordinates. He said that he should not go to Azerbaijan because they have conflicts with Turkey,” said Abraham Gasparyan, presenting the recordings of the conversations between the mercenaries. He was translating the complaints of the mercenaries in those conversations.

On September 30, Public Television touched upon the topic with a video from banak.info, noting that the Armenian armed forces also destroyed Syrian mercenaries. The video shows corpses lying on the ground with their faces covered.

In another article, Hanrayin interviewed Egyptian political scientist Amr Eldeb about the mercenaries sent to Azerbaijan, who said that it was clear that Turkey was repeating its experience in Libya by sending mercenaries from Syria. 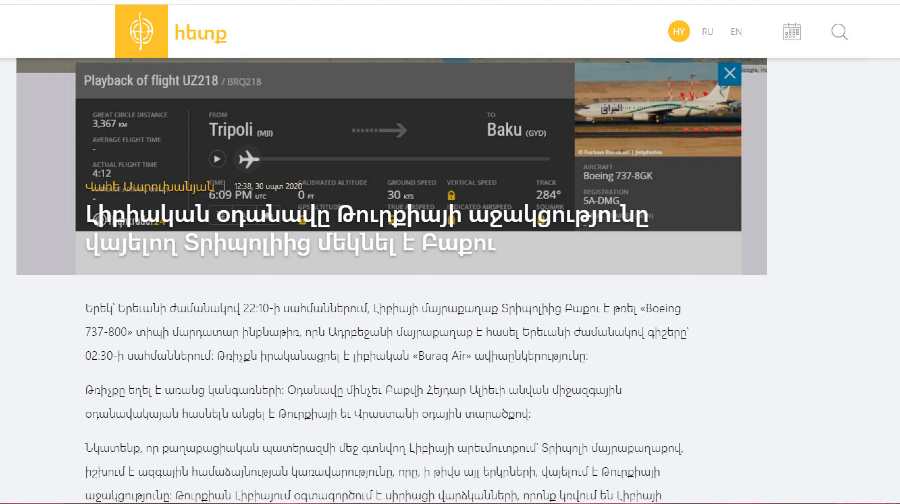 Hetq tried to present the transfer of the mercenaries with facts, following the flights made by aircrafts’ open data. “As the ‘export’ of mercenaries is being coordinated by Turkey, and on the other hand, Azerbaijan is in active military-technical cooperation with a number of partners, in this article we will focus on the flights of Azerbaijani and Turkish planes during the war,” Hetq writes.

Lragir.am author Naira Hayrumyan, referring to the statement of the director of the Russian Foreign Intelligence Service Sergey Naryshkin, noted, “Does Naryshkin’s statement mean that Russia can carry out an anti-terrorist operation in Azerbaijan to prevent terrorists from entering its territory? When the head of the Foreign Intelligence Service claims that there may be an intrusion, it means certain preventive actions.”