Coverage Of The Karabakh Conflict In The Armenian Media: July 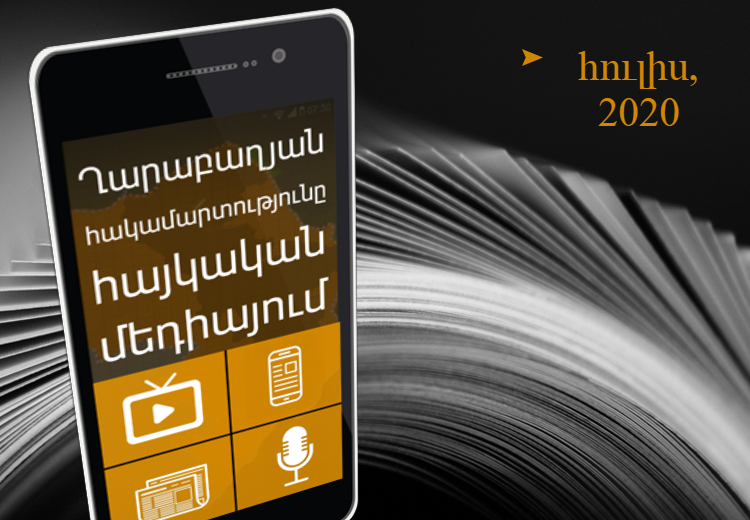 2020 The topic of the Armenian-Azerbaijani conflict was hot in the Armenian media in July.

The topic of the Karabakh conflict has been one of the most discussed topics in the Armenian media lately, starting from April 21, when Russian Foreign Minister Sergey Lavrov announced that a step-by-step version of the settlement is being discussed in the talks.

Discussions intensified after July 12, when Azerbaijani servicemen attempted to cross the RA state border in the direction of Tavush in a UAZ car, which was followed by shelling and hostilities.

Tavush was in the center of the attention of all media. Many of them sent correspondents to border villages, from where they regularly covered or broadcast live in border villages.

Every time there is tension at the border, the word “enemy” is used more often in the media vocabulary, not only by guests and reporters but also by journalists, who in their turn remind of the centuries-old enmity between Armenians and Turks/Azerbaijanis.

The media recalled the atrocities committed by the Azerbaijanis in Karabakh, as well as in the April wars. This seemed to be visible in all the media.

There were also editions that put forward other theses. They began to separate the army and the government, noting that the victory registered in Tavush had nothing to do with the government. A group of media outlets made it clear that the army corps led by Grigory Khachaturov was repelling all the enemy’s subversive attacks in Tavush, but Nikol Pashinyan was pursuing his father, Yuri Khachaturov. Khachaturov was charged with overthrowing the RA constitutional order in 2008 with the prior consent of other persons.

During the July events, many remembered the CSTO

In the days of the Tavush events, there was a lot of talk in the media about the CSTO, and many were waiting for the response of that military alliance, of which Armenia is a member.

1in.am author Aram Amatuni writes in his article, “The unprecedented decision of the CSTO, according to which the issue of tension caused by the Azerbaijani provocation on the Armenian border was to be discussed at a special session of the Permanent Council of the organization, has been postponed indefinitely. In other words, the CSTO does not betray Azerbaijan, which has almost always had military-political support.”

The Russian CSTO expert on security and defense Grigory Trofimchuk, who is more critical of the OSCE, also spoke about the CSTO response. “If the Minsk Group Co-Chairs are unable to work properly, let them leave their post. By the way, it is the OSCE Minsk Group that should clearly point out the aggressor side.

By the way, when Armenia or the activists demand the issue of the CSTO responsibility, it raises the question of the actions of Yerevan and the Armenian army. I would not do it so openly. The CSTO itself understands everything very well and will give an adequate assessment. One thing must be clearly stated: the CSTO will not go to war with Azerbaijan.”

Lragir addressed the issue from another point of view. Author Naira Hayrumyan raises the question, “Who benefits from involving the CSTO in the conflict between Armenia and Azerbaijan?”

Immediately after the July 12 incident, statements made by the staff of the Azerbaijani Foreign Ministry and Aliyev noted that Armenia wanted to involve a “third party.” “As they say, the thief gets caught red-handed. Does Foreign Minister Mammadyarov want to ‘prove’ his professional competence, to reach the entry of Russian or CSTO troops into the conflict region?” he wrote.

He made reminders that in 2016 During the April war, the President of Belarus did not call Baku, but Yerevan, and the country’s parliament adopted a new military doctrine banning military operations abroad.

․․․Turkish Kazakhstan and Kyrgyzstan, like Nazi Tajikistan, are unlikely to support Armenia. It turns out that only Russia is a CSTO member that rushes to “support” Armenia. Could Russia’s “support” be the last assignment for Azerbaijani Foreign Minister Mammadyarov, or is the current provocation an excuse for the Azerbaijani leadership to “zero out” the 20-year-old policy on the settlement of the Karabakh conflict?”

The topic was opened to the media when the Azerbaijani Defense Ministry, through the head of the press service of the Ministry of Defense of Azerbaijan Vagif Dargyakhli, threatened Armenia with “an international nuclear crime – the shelling of the Metsamor nuclear power plant.”

The 1in.am material reminds that Armenia never announced attacks on civilian infrastructure during the July border tensions, and did not target civilian targets.

As well as the fact that the 1987 Geneva Conference on Terrorism adopted the Declaration entitled “The Geneva Declaration on Terrorism,” which as an act of state terrorism, in particular, defines the attack of the state armed forces on targets that pose a threat to the civilian population of another state.

As a continuation, the website also covered international media coverage of the topic.

In another article, the Secretary-General of the European Ombudsman, Josef Siegele, in his official statement says “This statement is a clear threat to the civilian population; it could lead to a humanitarian catastrophe. Such statements undermine the international human rights system. “International humanitarian law absolutely prohibits such intimidation of the civilian population.”

Hakob Badalyan, the author of Lragir, thinks that the circumstance of the statement is not the threat of a coup, as the issue of the protection of the nuclear power plant in the security system of Armenia is undoubtedly properly taken care of. The problem is that a subject of international law, a state official of a UN member state, a spokesman for a government agency threatens to strike a nuclear power plant, which can not be described as anything but a direct, official threat of a humanitarian catastrophe.

Thus, Azerbaijan is threatening a humanitarian catastrophe, that is, state-level terrorism. At the same time, in the case of Azerbaijan, this is not news at all, as Azerbaijan is a country where ax-wielding, beheading, and torture of civilians are glorified and rewarded by the state.

“No representative of any state has yet publicly stated the possibility of an attack on the nuclear power plant. There has never been such a precedent in the world. It can be stated by terrorists, people with mental problems, but not the official representative of the state,” David Babayan, Advisor to the Artsakh President, told News.am.

According to him, the statement says that “we have a very dangerous terrorist opponent in the form of Azerbaijan, which will not stop at anything.”

According to Angela Elibegova, an expert on Azerbaijan, Armenia should draw the attention of the international community to this statement.

“It was a ‘wonderful gift’ given to us by the Azerbaijani side, threatening virtually the entire region,” she told News.am, adding that one should not have high expectations from the international community, that is, expect a serious response punishing Azerbaijan. it’s not necessary.

In a conversation with 168.am, Azeri expert Grigory Ayvazyan says that Azerbaijan had revealed itself as a terrorist organization long ago.

“The announcement related to the Metsamor Nuclear Power Plant, in particular, is cheap blackmail, an empty scandal. If such a thing happens, Azerbaijan will in fact blow itself up, destroy the region, poisoning all water resources. The region is very small in that respect, consequently, Turkey, Iran, the south of Russia will also suffer. So, all this is nonsense, let them not forget that not in case of necessity, but necessarily in case of large-scale military operations, the Armenian side will destroy all the strategic objects of Azerbaijan.”

Anna Hakobyan’s call for peace was definitely not accepted

The call for peace by Anna Hakobyan, the wife of RA Prime Minister Nikol Pashinyan, in which she addressed the Azerbaijani mothers, “to call on the leadership of their country to stop hostilities, not to endanger the lives of the children of the Azerbaijani and Armenian peoples,” appeared across the media. Some simply posted it without comment, and in several media outlets, it became a subject of discussion and criticism.

During “Interview” on “Channel 5,” the guest of which was Angela Elibegova, an expert on Azerbaijan, referring to Anna Hakobyan’s calls for peace, the host Agnesa Khamoyan asked, “When will we get tired of these calls for peace?”

In response, the guest said, “I’m already tired.” Continuing the topic, she notes that she does not understand its purposefulness and effectiveness, because “if it is addressed to the international community, then the rather balanced, neutral statements that say nothing, still do not reach their target audience. Even if Anna Hakobyan does not make that statement, Mehriban will not give up his military rhetoric.”

According to her, the topic of Armenians is very sensitive, everyone has friends, acquaintances standing at the border․ “It is not like that in Azerbaijan, people’s lives there are not of such value for their propaganda.”

“Peace-loving calls from the Armenian side are perceived in Azerbaijan as a sign of weakness.”

In her opinion, instead “the first lady should, first of all, thank our soldiers.”

During Armnews’ “Agenda” program, the host hints at Anna Hakobyan’s call for peace and asks former freedom fighter Gagik Sarukhanyan, “When a soldier’s spirit should be raised by talking about victory, we are talking about peace, why?”

In response, the guest said, “If your son dies at the border today, it is inappropriate to talk about peace.”

“I am writing because I am sure the addressee will read it.

Mehriban Aliyev must understand that, as he says, the struggle for the homeland is really sacred.

There is just one problem:

Madam, you have invented a homeland for yourself that never belonged to you, you want to usurp someone else’s homeland, and that is impossible.

… You will never hear mugham in Artsakh, with or without an invitation. And now a guide from the Armenian society in case you have misunderstood the “peace-loving” calls coming from here.

Madam, we do not ask for peace, we have forced it on you … ALWAYS. Our mothers and sisters want and strive for peace, but they have not made jewelry out of weapons.

Do not be deceived, do not take camouflage, flowers, and pathos seriously; we are vigilant. We are strong and we speak of peace from a strong position. No one is afraid of your hysterical shouting ․․․”