“For me journalistic provocation is legal action” 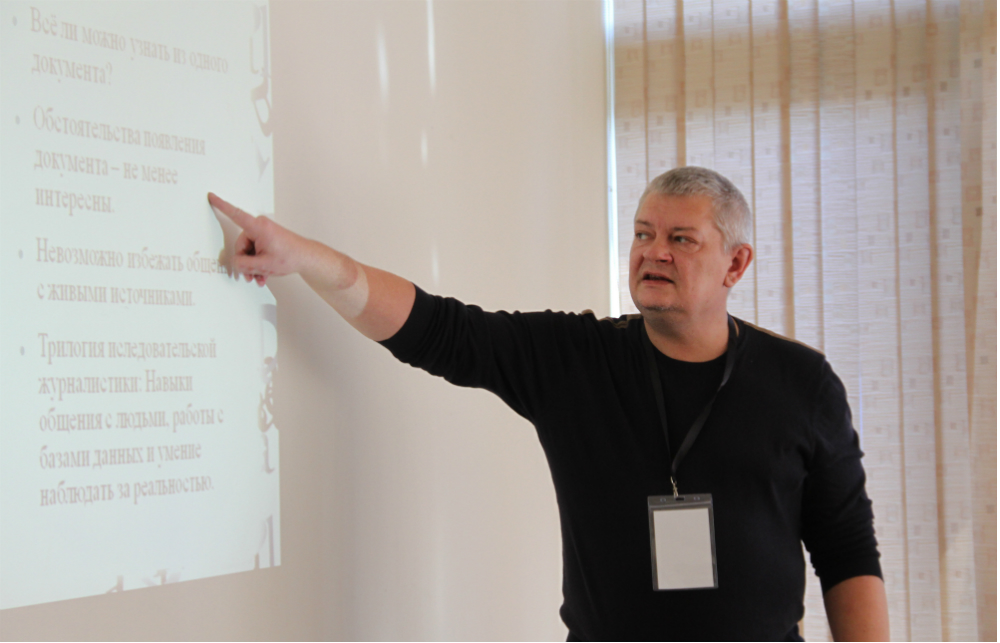 Consultant to the European Humanities University and Lithuanian journalist Rytas Staselis is confident that investigative journalism will cease to be considered as an elite branch and will enter the media field as a journalistic genre comprehensible for everyone. “We must try and pay more attention not on those accused of dishonest practices, but on direct or indirect victims of dishonesty.”

During the “Tvapatum Investigation: Media Against Corruption” conference, presenting his experience in investigative journalism, Rytas Staselis stated that it is desirable to long-term collect information from the bottom up. In other words, to make the primary source the victims of corruption and various financial and economic firm frauds. When you speak from the point of view of the victim, the journalistic material becomes more widespread, since the audience sees that they could also be in the place of the victim. Or because corruption cases could hit their own pockets.

It is often the case, that the journalist spends a lot of time on collecting information, but the material is never published. “The most difficult question for a journalist is this: And what new and fresh thing will I say in my investigation?”

How great are the reactions from investigations in Lithuania? In Armenia you would think nothing moves from its place, the same officials receive different titles, and revelations of corruption cases remain up in the air.

But that cannot last forever. A few years ago it was also like that in Lithuania.

I understand that subconsciously the situation is an obstacle for journalists, but I, for example, am convinced that if in a given time period officials are not made accountable, then they will be punished in the future or simply thrown out of the new system. All the same, their turn will come.

In Lithuania the officials understood, that when their dark deeds are exposed, it is more beneficial to leave rather than stay and pretend to be forever covered in a layer of teflon (in other words, that they are always protected).

Even if some of the officials consider themselves to be untouchable individuals, they will nevertheless lose during the next election. That was understood by both the officials and the public.

In investigations do you consider the use of provocation and experiments simulating reality to be acceptable?

I remember that with American journalists we conducted a big investigation on the topic of illegal immigration. We learned that there were four addresses in Vilnius, where more than four thousand companies were formally registered, that were providing temporary residency rights to Russians and Belarusians. We, the Lithuanian journalists, during our investigation, were introduced as an interested party (that is, those wishing to immigrate) and we approached the underground companies with the desire to obtain a visa.

Several companies even sent us their price list. We thought that the main line of investigation is already known…but the American colleagues called our approach “dirty journalism” and refused to use our obtained information.

And so it turned out that two Lithuanian journalists left this project and did their own investigation. And it must be said, that what they did was super material.

I think sometimes the simulation of reality can lead to good results. Personally I do not see anything bad in that, but it is irritating to Americans. American journalism standards require that real victims of real cases be found.

Again I repeat that it is a matter of culture. Perhaps in America you can find fraud victims willing to testify, but that is almost impossible in our country. Just as the sword has two blades.

Have you ever faced suppression from the authorities?

Over the years, the authorities are becoming more intelligent. In 1993 in Lithuania they killed my colleague. She was going to work in the morning, and they killed her on the street. 1990 to 1995 was anarchy.

But the progress made in recent decades is truly impressive. Yes, years ago my editor-in-chief was almost going to be imprisoned, but now the authorities no longer suppress critics. Such a thing simply cannot happen.

In Lithuania you also defeated the Soviet past well.

Of course, the public displayed their will, but rather than pulling us by the ears, that past led to the European Union. First of all it changed our judicial system, forced it to respect human rights. Perhaps we wanted to create a type of single national state, but that did not happen, because there were laws, which were imposed on us.

And that coercion worked.

I only request that you do not think that the process was simple and relaxed, both public and professional discussions and debates constantly took place. Emotions were many, as well as the realization, that everything is not definite.

But the important thing is that they made us change. Our president, for example, was declared impeached, and the Constitutional Court banned him for life from participating in the elections, where the oath is required. And that was perceived as very natural, because if you break your vow once, how can you assume, that they will believe you the next time? And the European Court considered it to be extreme punishment and made the requirement that the “life” term be removed.

What I want to say is that no matter how difficult it may be, you have to obey the laws that you have accepted. Our courts have adopted the European measurement system, and are now able to make more decisions for themselves.

That also helped regulate the work of the mass media. In Lithuania, journalist know for certain how to behave in different situations, what rights and responsibilities they have, what to do in those circumstances where the law is similar to a fragile border.

The merging and contradistinction of journalists and activists is a very serious topic of discussion in Armenia. In your opinion, does the civic position help or hinder journalists?

That is a difficult question. The Turkish President Erdogan recently managed to get out of the military coup situation thanks to the CNN Turk channel, which broadcasted on air the president’s speech made on social networks. Erdogan was in contact with his supporters on air, and that helped significantly in his stability. It can be said that the mass media did its duty and simultaneously showed the active civic location. But the issue is that afterwards many of the journalists were imprisoned…

Since 1989 I regularly come to Armenia and Karabakh, covering the wartime events. Although I see a lot of blood and loss, working here is easy for me, since I can allow myself to be impartial.

But when in 1991 I was in Vilnius Square and saw how the Soviet tanks were attacking, I thought, I could not care less about impartiality. Now is not the time for that.

And this dilemma will always exist for journalists. Is it possible to be completely objective and impartial?

It seems that no, but it is possible to hide it.

It is good, if it works out.