“In troubled times journalists must try to remain professional” 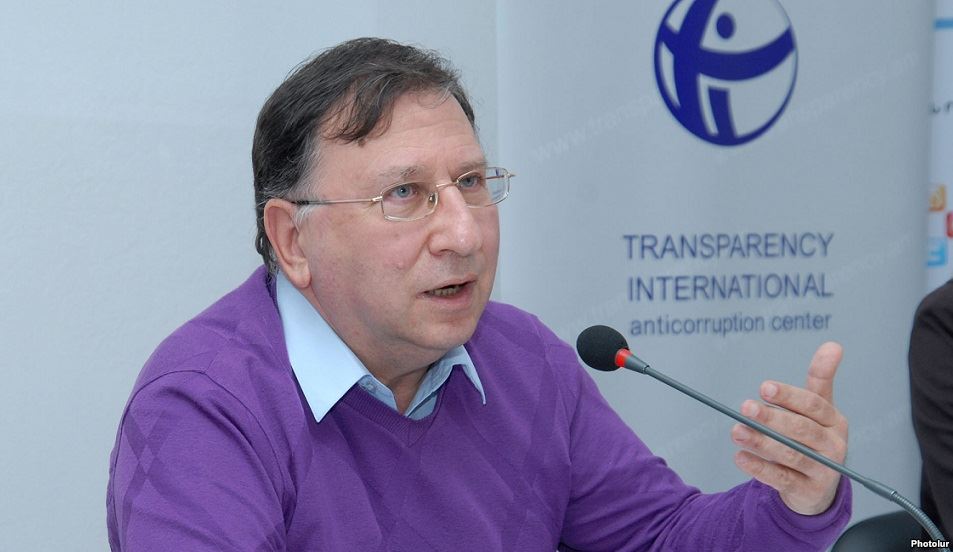 Executive director of “Transparency International Anticorruption Center” NGO Varuzhan Hoktanyan is certain that if the National Integrity System is used in Armenia, the media will feel that they have support. In that case, news that exposes instances of corruption would be considered to be a criminal report.

The word “corruption” translated means rotten. And anything that is rotten certainly leads to destruction, involving different and related sectors, areas, and individuals.

Journalism is that sphere, in which the possibility of cleaning is introduced. Varuzhan Hoktanyan believes that the work of journalists is now similar to the Munchausen trick (you grab your hair and pull yourself out of the swamp). But this trick can help the public get out of apathetic lethargy.

In order to prevent corruption, what type of minimum steps are needed?

First, it is necessary for the key state institutions (judicial, executive and legislative authorities, the electoral system, the ombudsman, the Chamber and others) to have an anti-corruption role and certain functions to prevent corruption.

But it is very important, that the role exist not only in state institutions, but also in media, political parties, business, civil society (NGOs, foundations, etc.)

The basic idea is that reducing corruption only through state bodies is not possible. We recently presented the data from the Global Corruption Barometer, which is summarized for the countries of Europe and Central Asia. It is quite a sad picture for Armenia, especially in terms of public attitudes.

Our society is alarmingly indifferent towards corruption. And I believe that in this apathetic situation, journalists especially have a lot to do. What is needed for them are types of features, in order for them to become an institute that prevents corruption.

First of all, the media must be independent and have enough financial, technical and human resources. In the information sector, well-financed, and most importantly, capable people must work.

The journalist must be rewarded so that he/she remains interested in “digging” serious topics. Honestly speaking, for him/her, besides a salary, money and resources are needed to be sent to different regions and to carry out investigations.

No less important are the internal administration standards. For media outlets the principles are very simple, they must remain transparent, accountable, and, ultimately, conduct themselves in such a way that what they say and what they do do not contradict each other. In other words, gain trust through their behavior.

It seems that the main issue is that in Armenia it is difficult to specify one media source, that is actually independent from political or economic interests (mainly shady).

That interrelationship is really a serious issue. And, unfortunately, the results of the research on the media, in terms of the components of Armenia’s integrity system, does not encourage us. We can say that there is a legal framework regulating the work of the media, however, problems arise when it comes into practice.

I believe that the “Media Ethics Observatory,” which regulates disputes and violations, could have had a serious role, which is a self-regulating union. But as far as we can see, that body doesn’t have a great reputation or play an active role.

The journalists themselves must appeal to that body, which rarely happens.

The fact that journalists do not appeal is already an indicator. I am certain that the reasons to appeal are many.

It is important that that the media remain professional and want to cover and investigate cases of corruption. If we are to be honest, right now besides “Hetq,” a similar desire does not appear in any other media’s work.

From the point of view of anti-corruption, it is necessary that the media makes discoveries, are able to present their news and stories to the public and promote certain values.

Naturally, in order to do that the media itself must be clean, independent and transparent. And if the media does not reveal its real owner, a question arises: And what position are they in to speak about corruption? Honestly speaking, start with yourself in the beginning, then move on to others.

We cannot say that there are independent channels, which is very evident during the times when serious, prompt and impartial coverage is required. For example, in the case of “Sasna Tsrer.”

Television companies are constrained, though they continue to remain the media source with the highest views. It is natural, that we cannot wait for serious news about instances of corruption from these types of channels. And if those types of programs appear (for example, “Sur Ankyun”), they are reminders of that Soviet model, that somewhere there are some flaws, but in general everything is fine.

In reality, indifference can also be observed in the work of journalists.

The enthusiasm begins and spreads, when there are visible changes. In our situation we cannot wait for journalists and the media field to operate hyperactively, to make serious political or economic discoveries (even in those “innocent” areas, such as art, culture).

Many think that, if everyone is involved in corruption, what can we do? We cannot become the odd one out, especially since there is a giant machine in front of us.

This situation is similar to Brezhnev’s “era of stagnation.”

I remember such an anecdote: a man wanted to post flyers to buildings, they catch and take him to the police department, they search him and find out that the flyers in reality are white papers. They ask, why are you posting blank papers? He answers, well, why should I write? Without it, everything is clear.

Now it seems that our society thinks like that. If society is tolerant towards corruption, it is unlikely that anything will change. Perhaps many think, what can we do? It is so.

Many news articles remain unanswered, that is frustrating.

Of course, that is also disheartening, but there is also a chain reaction, which will certainly lead to some result. For example, when officials in Ukraine presented declarations for their property, journalists begin to check them and make very interesting discoveries.

The journalists felt like they were part of their society. For us it is not like that. Rather, state bodies use the principle of “the dog barks, the caravan passes” towards the media. But in any case we must continue to work.

I am trying to understand, what is the vector of change? And will the critical mass necessary for change reveal itself.

I remember when in September 3, 2013, the decision was made to join the Eurasian Union, that decision’s displeased mass did not reach a critical amount. Few people came out to the streets to protest. But in Ukraine they did come out, and the president was forced to flee.

Actually, Armenia’s geopolitical choice or cases of corruption are not those issues which can induce changes in government or take people out to the streets. Not even poverty (let us not forget, that the French Revolution arose out of hunger), which could have led to a social revolt.

And a question arises, then what do we want? There is no idea, which will bring people outside to the streets, as happened in 1988. In subsequent years, democratic ideas were completely discredited. People do not know what democracy is, since what came after the Soviets was something else. People live poorly and think that is democracy.

Disappointment is passed on from generation to generation, you would think it is inherited. The idea of living with folded wings is also passed on.

Perhaps compromise has its positive aspects, it helps maintain existence. In any case, in a historical context, living with your head down and quietly has helped.

Our rate of adaptation is very high. We easily adapt to a bad situation. And a question arises, what is that internal border, which after being reached, will mean adapting is no longer an option?

As far as we can see, the authorities are able to work in such a way, that people do not cross that final internal threshold and still maintain hope.

The basis for tolerating injustice is the “We cannot do anything, we are small people” mindset. And when those are the rules of the game for society, it is difficult to change that mentality. And when, for example, we ask if they want to get involved in the fight against corruption, more than half of those asked answer, no.

At the time of the Rose Revolution, Georgia was among the five most corrupted countries, in a spot far worse than us. But it was able to change and now it is very ahead of us. And in the beginning, Georgians were skeptics, even laughing at the efforts of President Saakashvili, and later saw, that it is working.

In your opinion, what can journalists do to change public apathy?

First of all, let them remove self-censorship from within themselves. Then, let them think about finding resources for their work. Of course, that is very difficult. It would seem that it is similar to what Munchausen did, when you grab your own hair and pull yourself out of the swamp.

The call to work transparently and independently may seem conventional, but it is the solution. In our troubled times, remaining professional is the right thing to do. To not lose the inner freedom, to be responsible for our own materials.

Individual journalists are the hope, who, understanding the present conditions, work more professionally and free. In other words, they observe the news more deeply, analyze it, and treat their work seriously. At least they do not spread garbage.